...yes, Virginia, there is ALWAYS a better way to do something. This is something I have struggled with from the beginning of my stamp hobby/craft/art period, and I am actually learning to do things better, albeit slowly, over time.
I started out making cards because I am a crafter at heart, something that goes back to my early childhood. It is in my blood. But anything I do needs a REASON to be done, so as my Living Room filled up with cards, I decided I would make cards to sell at local craft shows and farmers markets. This would, in theory, help me recoup some of my expenses, and keep me in supplies (she said ever-so naively.)
This is an important point to remember - the making-cards-to-sell focus of my craft - as it will explain a lot about me and my purchasing habits. When I create a card I like, I make more than one of them. So when a card takes a lot of time to make, or includes an expensive embellishment, I have to do the math and decide if it would be cost-effective to make en masse before I choose to do so. I have walked away from some g-o-r-g-e-o-u-s embellishments because they would add 50 cents to the cost of a card.
When I first started out stamping and paper-crafting, I was doing things the way I thought they should be done, which was fine, but not necessarily the EASY way. Case in point. I saw this cool card of a man's shirt and tie: 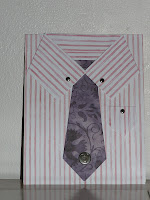 and I just had to copy it. First, I made the template, which is really no more than the tie parts and the pocket cut out of thin cardboard, like shirt cardboard - the kind you get from the cleaners with folded men's shirts, or with some packing stuff, like in the catalog boxes or in with the Stampin' Up! Designer Series Paper packages. Anyway, the template was easy to make. The template parts are then covered with the patterned paper. After making one, I realized for each card I made I needed a set of cardboard template pieces, and I had to cover each one. This was starting to sound like work.

I was a rookie, so what did I know? I sat down one day and made 10 of these puppies. Cut 10 templates, wrapped all of the parts-is-parts, making sure to have the stripes going in the same direction. Then I stuck in all the brads, and assembled the cards. It took a LOT of time. People loved them, and they sold like crazy, especially around Father's Day.

A good friend of mine who talks me through most of these life-altering activities, pointed out that the labor I put into these cards was not worth what I was selling them for - the same price as all my other cards. He suggested I either needed to have tiered pricing for my more complex cards, or I needed to find a better, less time-consuming way to do them. Good ideas, so I pondered for a while.
Then I saw a folded paper bill made into a man's shirt. Voila! Lightbulb! I did a Web search and found several sites with instructions on how to make an origami shirt. The one that I finally 'got' was instructions for a Kindergarten class. Hey, if it works, go with it! I started cranking out shirts like hotcakes, and it was so EASY, I never went back to the original. This is one of the first ones I did: 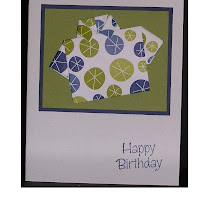 Ignoring the poor photography and lack of cropping skills, I thought it turned out pretty well. You can tell how old it is by the Stampin' Up! paper I used. Yeesh! (They were great colors, though, no?) 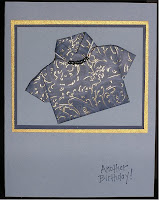 Not to be one-sided, I also made a bunch for women, with folded-down shoulders so they were more rounded. And I got to use some of the pretty patterned paper from my stash, to boot! I also got to use some of my wire and beads to make necklaces.

Bottom line: lesson learned on how to do this one easier, faster, and more economically.

Moving on to Lesson #2. Back in my Did You Hear That post, I showed this brownstone card I make to sell at a local Farmers Market:

I print the name of the city on the computer (SOMETHING has to be straight!), then stamp the brownstone three times, then stamp the light. I sell them as 5-packs, so I stamp a ton of them, then go back and do the water-coloring. VERY labor-intensive. I sell them for more than my normal 5-packs of Thank You notes since they take so much more time to create. See, I was listening to my pal's suggestion of tiered pricing, and I made these worth my time. Most people get it once I explain how I make them, and no one has balked at the price difference.
The rest of the Did You Hear That post talked about my inability to line up anything any more, ergo I am no longer able to create these cards. ;-( I tried, but after the watercoloring revealed even more sloppiness, I could not bring myself to even sell them as singles. To cut my losses, I quit making them.
Fast forward to my recent shopping spree. No, really, there is a point to this! Remember, when I shop, and the ONLY thing I shop for is stamping stuff (I am allergic to shopping malls, in general), I see things - paper, embelishments, stamps - not only as a would-I-use-it, or do-I-like-it, or I-must-have-it (yes, I am weak), but I also try to think if it would do double-duty as something that would sell. I almost (almost) never buy something ONLY to use it to make cards to sell, because if I will not use it for myself, I certainly cannot justify the 2 square inches of storage space the stamp will take up in my humble condo.
So as I browsed the local stamp store, I discovered this cool stamp by Stampendous that just screamed, "You must buy me, take me home, and use me to make more note packs."

Is it not VERY cute? And there are three bonus points about it. (1) the houses are already lined up, (2) the houses are 'drawn', so they are a little not-perfect to start with, which is PERFECT for me, and (3) when I got it home and introduced it to the raised-edge note cards I'd hoarded from Stampin' Up! when they hit the Retiring Accessories List several years back, they were a PERFECT FIT!

This is the first one I made, and my water-coloring needs a bit of work, but all-in-all, I think it was a good purchase.

I have no plans to reveal all the other purchases from this past weekend, but let's just say that I have more very cool patterned paper, some A Muse must-haves, some VERY cool embellishments (cost-effective for mass production, of course!), and a few online purchases that I will not discuss right now. Maybe another time.
Posted by Leslie Hanna at 7:40 PM