Say what? Christmas? Yep. The gals at Jingle Belles have a fun sketch this fortnight, and it kick-started me to make a card! Lookie: 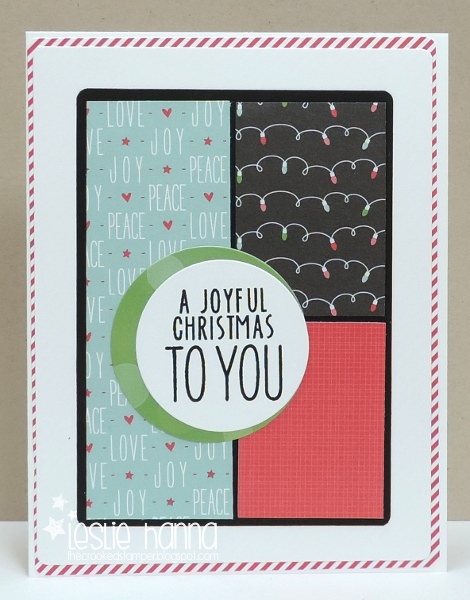 It's such a great sketch: 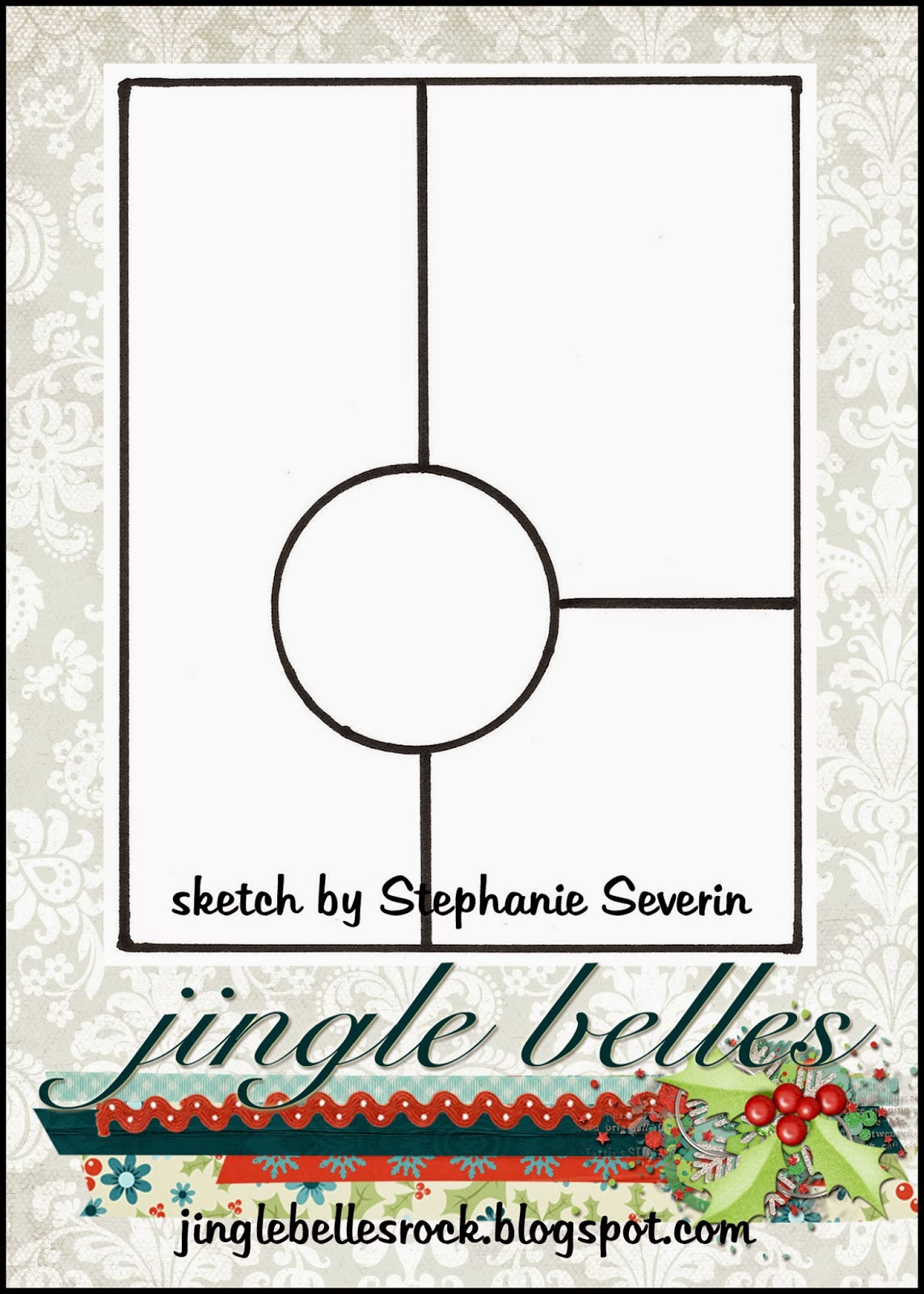 So great, in fact, I took a few liberties. I made the main panel a little smaller, thereby allowing me to use one of the bazillion pieces of black card stock remnants on my desk from making my SOS card this week. #BONUS

Also, that sideways circle thing? That's because I cut the green circle a little off, and needed to hide the flat edge. Oh, wait, I meant to do that!

Thanks, Belles, for another great challenge! I might need to use up some more holiday paper pieces, so I may make another one. Could happen. 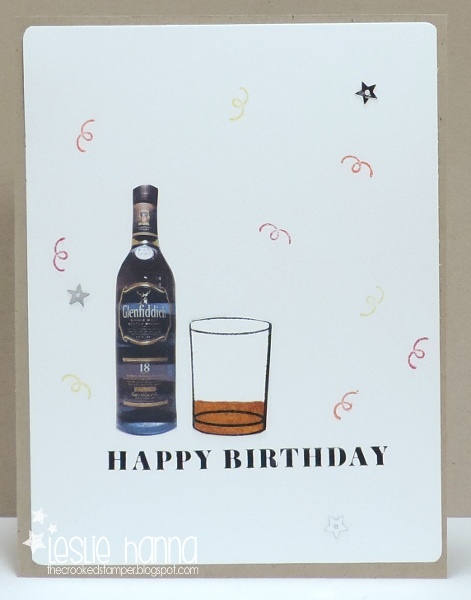 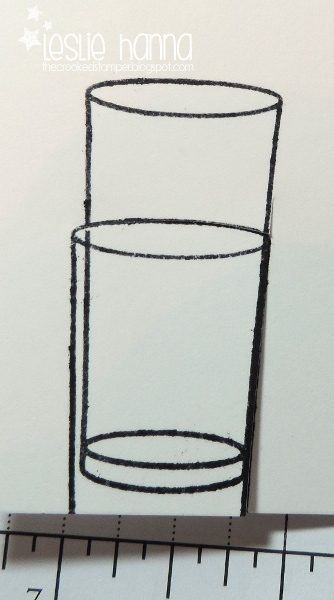 THANK YOU to all who played my third sketch challenge! I continue to be humbled by your support. xoxo

Here are my top picks for April. The winner is Maura, with this card: 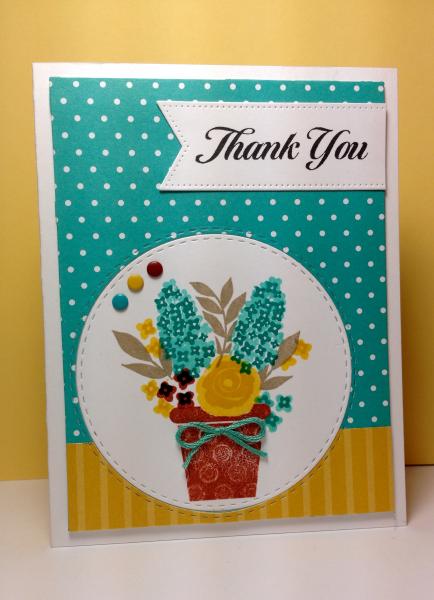 There's something about those colors that pulled me in.

And the two runners-up are Kathy: 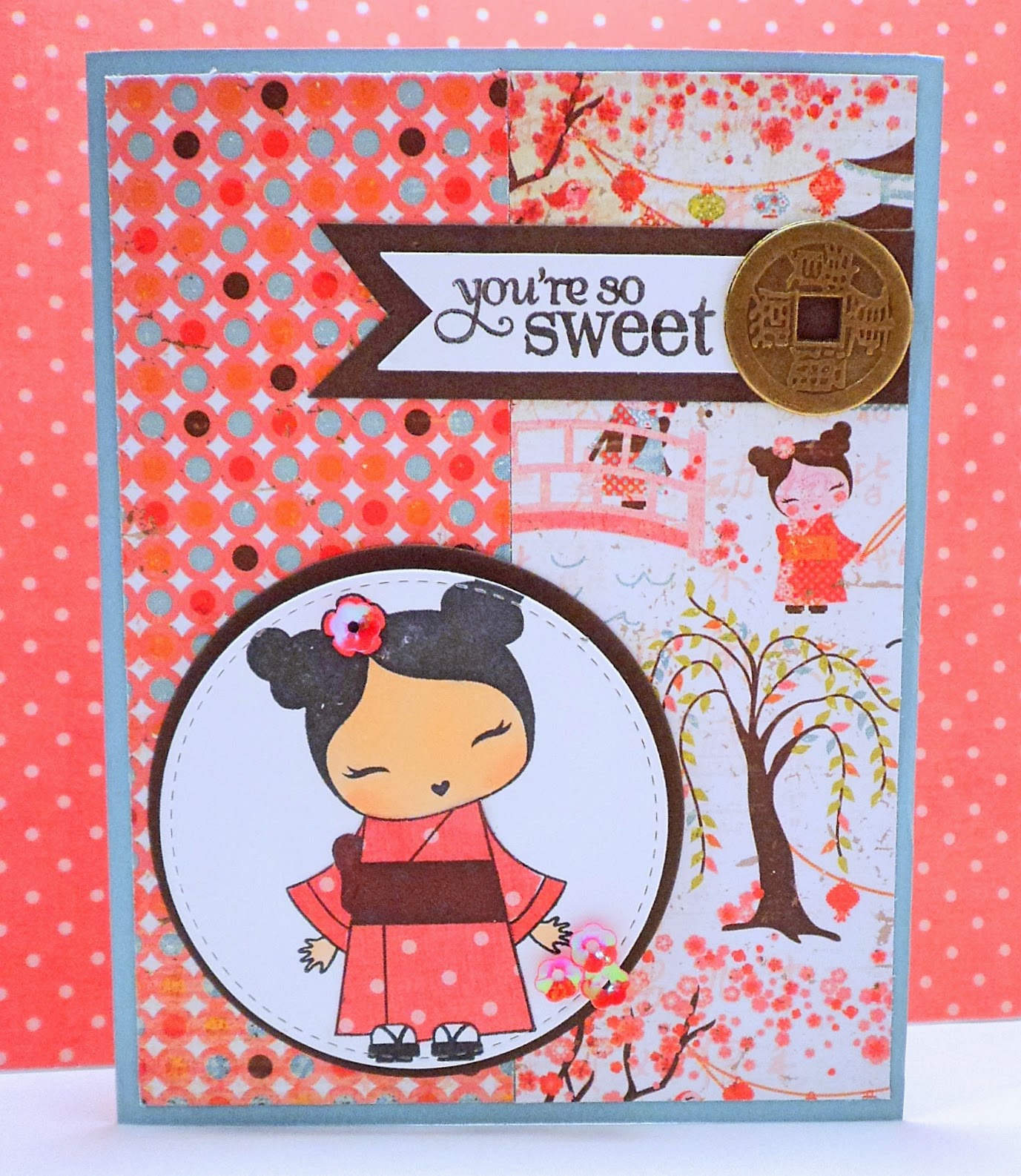 I liked the pretty combination of papers (even if they are gah pink), and the fact that she used a cool coin, which I may also have hoarded. 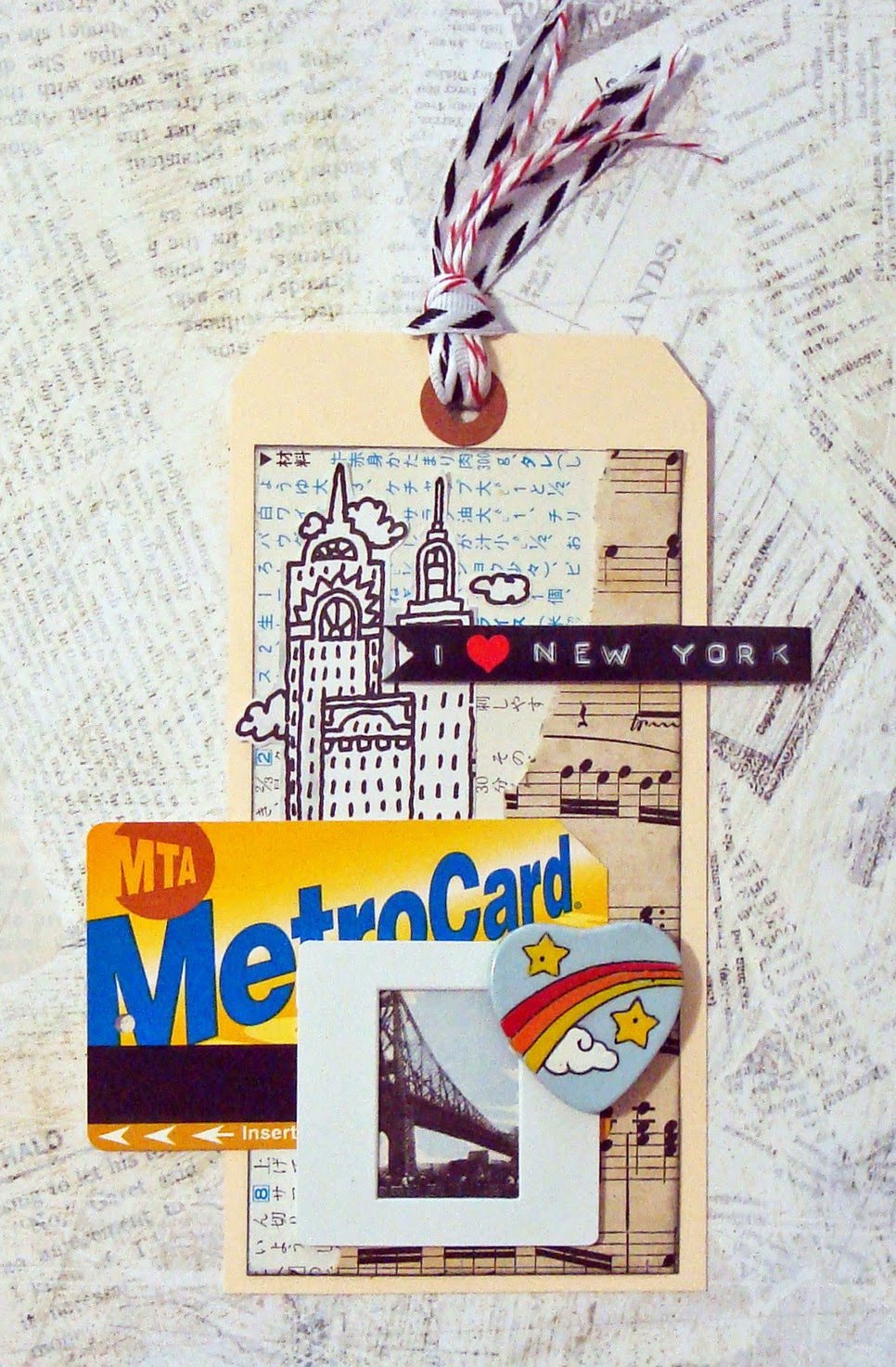 who has the insane ability to put 10 pounds of stuff on a card and make it all look like it's meant to be there. I bow down to her daily.

And Maura, please email me (link on the right) to select your ink colors!

Thanks, again, for your support! xo
Posted by Leslie Hanna at 7:00 AM 6 comments:

It's Tuesday, and time for a new challenge at Shopping Our Stash. This week's theme is Opposite Day, and we'd like you to break out of your comfort zone and do something that's opposite your normal style. Do you tend toward more of a CAS style? Why not add a frou-frou ribbon? Normally more of a pile-it-on type? Then try CAS.

In my world, I've found I'm more CAS these days, so I forced myself to play with some mixed media supplies in my collection. Here's my card, then I'll explain: 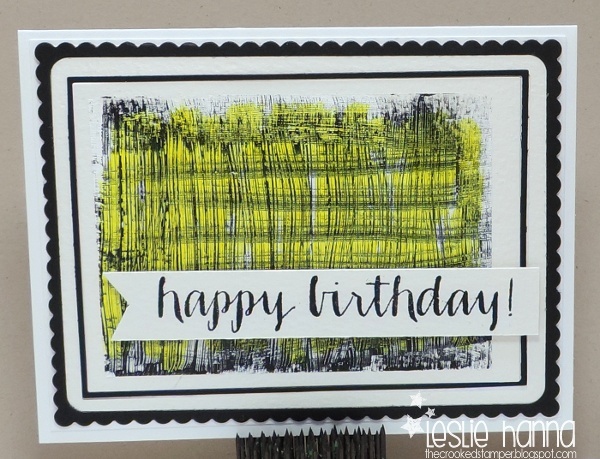 It still smells CAS, but I really did try. First I applied a layer of white Gesso to some SU water color card stock (I have no idea why I chose water color ... it was on top), then I scratched a pattern into the Gesso with my Tim Holtz scratcher thingie: 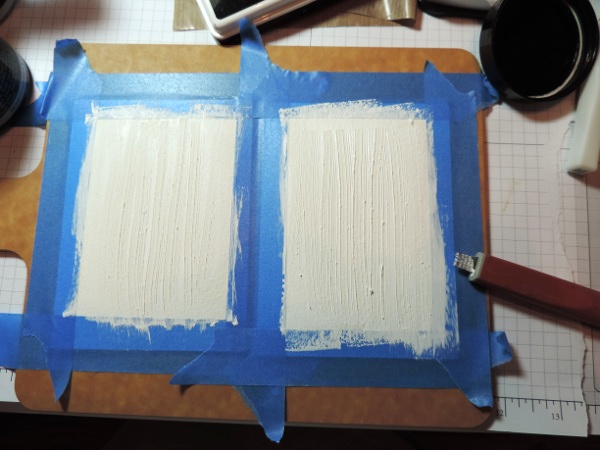 And yes, I made two, since I mess up a lot, and it makes sense to cover myself in these perilous times.

Once it dried, I broke open my black Gesso, painted it on in the opposite direction, then scratched it with the scratcher thingie, too: 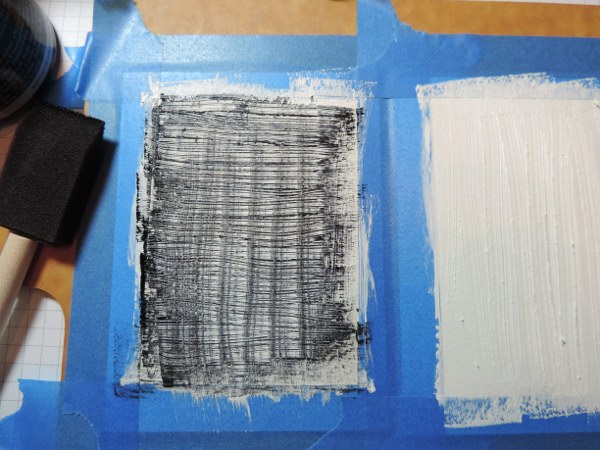 Then I waited for things to dry. I might have napped.

The next day I decided the black & white needed a shot of color, so I added some Hero Arts Neon Ink with my dauber bottle.

Next up I decided it still looked amazingly CAS, so I needed to add layers. I broke out my maybe-used-once Simon Says Stamp Frames set and got to cutting. Many layers of frames ensued. I used to layer everything, but now, not so much.

I added a busy-ish sentiment that I used my MISTI to stamp multiple times to get a clean image.

Okay, it still squeaks out some CAS, but I really did try, and I played with some mixed medaia stuff that's usually ignored in my stash, so I call it a success.

Why do I now feel the need to go back and add some black paint drops to the card front? STOP. Just STOP!

So, want to stretch your wings a little? Come on over and play our Opposite Day challenge!

Funny thing when you organize ... it actually creates work. I mean, I had this box of ignored and unloved stamps because they were all tiny and out-of-the-way and I just never looked at them much. Once I put them all into larger and similar-sized envelopes, I got to touch and feel them, and remember them fondly.

As part of the next step: to put them away with their other more-loved brethren and sistren, I kept out a few to use. I KNOW, right?!?!

Here's one sentiment set that got used: 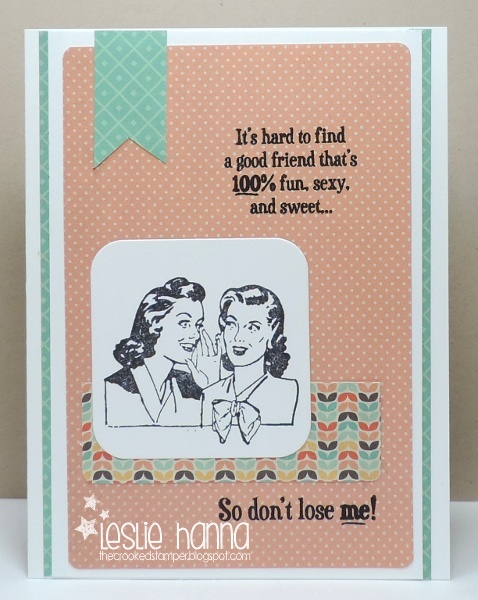 heh heh I had to pair the sentiment with my Stampers Anonymous ladies ... just had to. The papers were all pieces from my Fancy Pants True Friends 6x6 paper pack.

Here's another stamp that got used before it was filed: 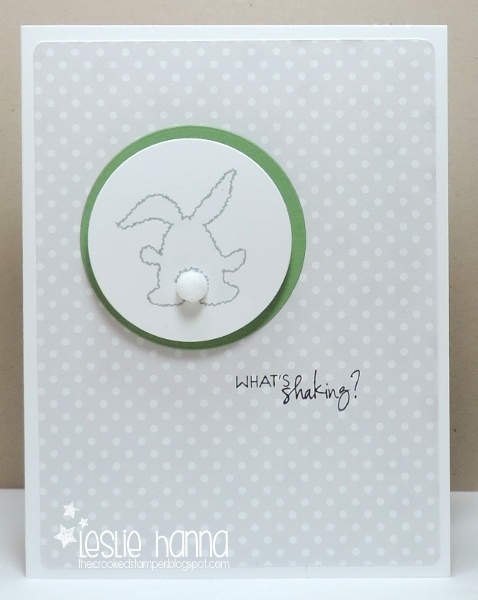 It's an adorable bunny butt from Verve, and it screamed for a wobble, so who was I to argue? For the contrasting circle, I used a piece of green card stock that was sitting on my desk, selected a pale grey background piece of paper, stamped the bunny in Memento London Fog, and colored it with a Copic. I also opened and used a bunny tail fluff thing. Go, me. The thing really does wobble. :)

Now those two sets have been filed, and I'll hopefully see and use them more now. A girl can dream.

It's Tuesday, and time for a new challenge at Shopping Our Stash. This week's theme is Texture Me, and we'd like  you to use your oldest embossing supply: folder, powder, or go another step back in time and use a texture plate, or even a brass stencil!


I think the last time we did this challenge I also used a Fiskars texture plate. Those things are ancient, and during my recent "put it away where you have a ghost's chance of finding it again" policy with my craft room, I even have the funky tool that came with the plates. This was way before embossing folders.

I have a print-out of Cuttlebug instructions for using the plumber's rubber gaskets I use with these plates, but I no longer have a Cuttlebug, so I faked it with my Big Shot. I used (from bottom to top) the Big Shot base, cutting plate, Fiskars texture plate, card stock, and thin rubber gasket. It embossed just fine, so I was happy.

For the rest of my card, I decided to play a few challenges. I combined the current ColourQ challenge: 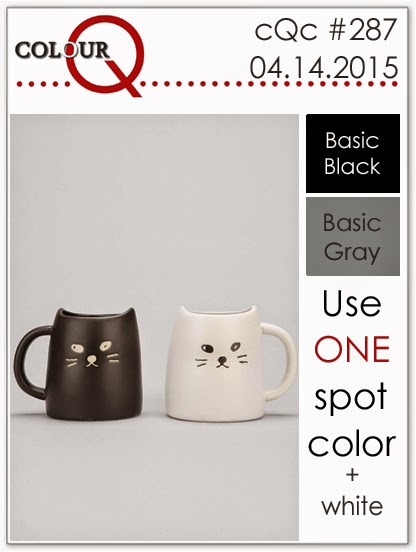 and the current The Male Room challenge: 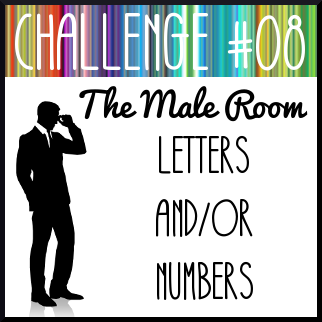 I pulled out my Riley guy, since I almost never use him, and my trusty Dymo labeler for the custom sentiment. I've found that the labels come un-stuck after a while, so these are popped up (hopped up) with pieces of foam tape.

The numbers are my splash of color, and they were cut from a piece of red card stock laying next to my trimmer.

Here's a closer look at that texture plate impression: 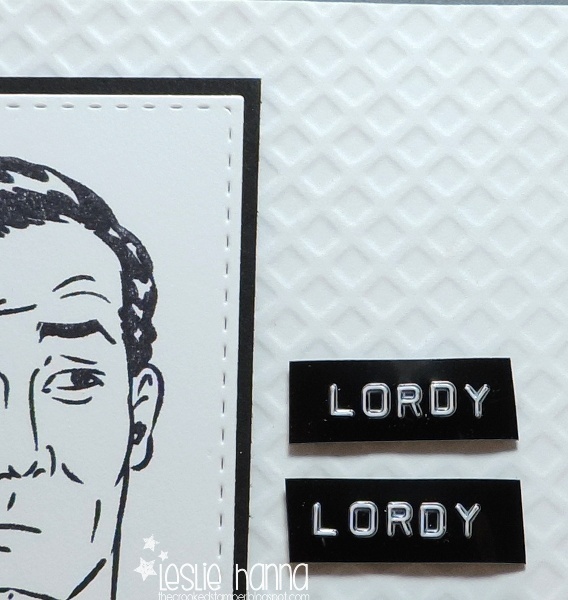 So, got old, unloved, embossing products in your stash? I think you should play along with us this week over at SOS!