It's Tuesday, and time for another Shopping Our Stash challenge. This week, since we were so bold as to schedule a challenge for the last day of the year, we ask you to use the last of something. Yep, you have to use up something in your stash.

I rummaged in my miscellaneous drawer and found this container of metal photo anchors: 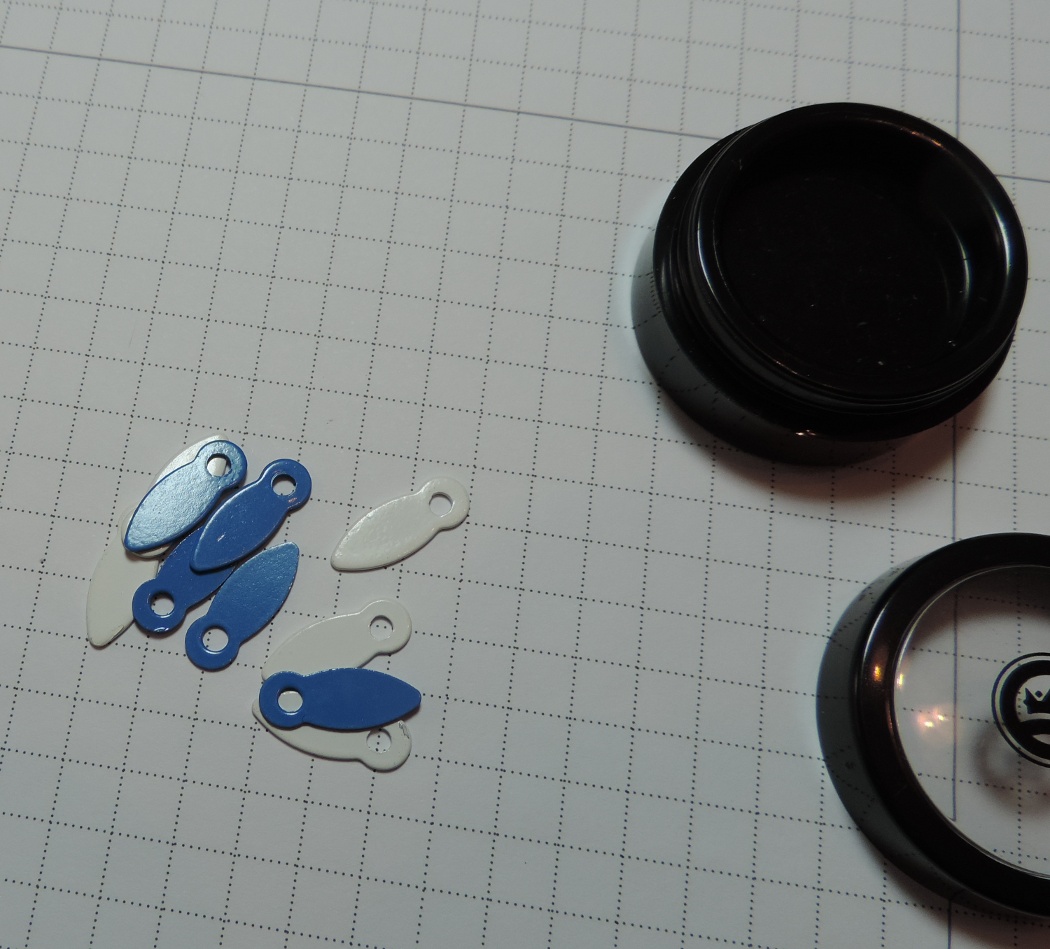 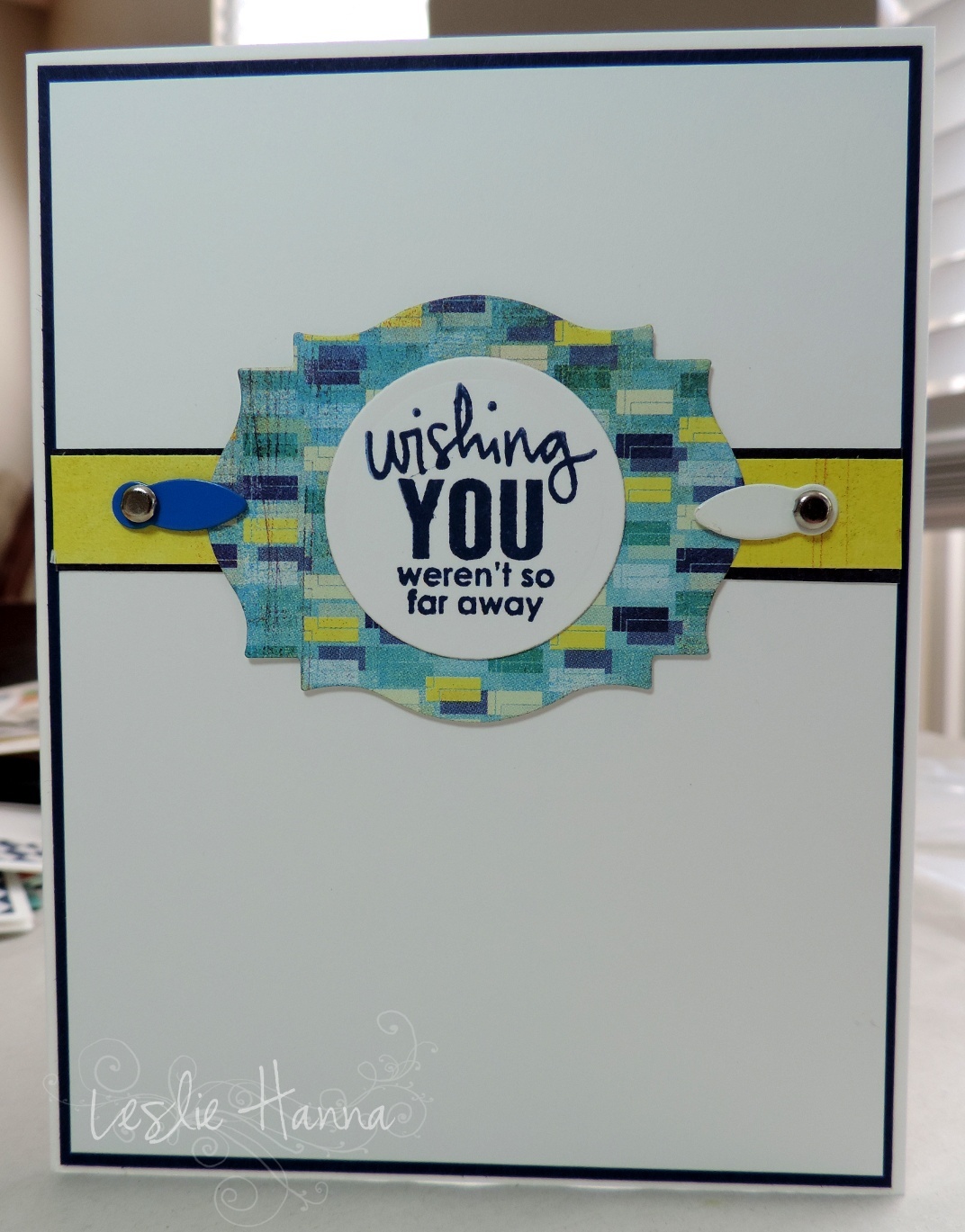 I actually made four of those. I pulled out my almost-gone pack of Basic Grey Lime Rickey 6x6 papers and cut four shapes using a Labels Nine die, and then I cut one more out of another paper to make this one: 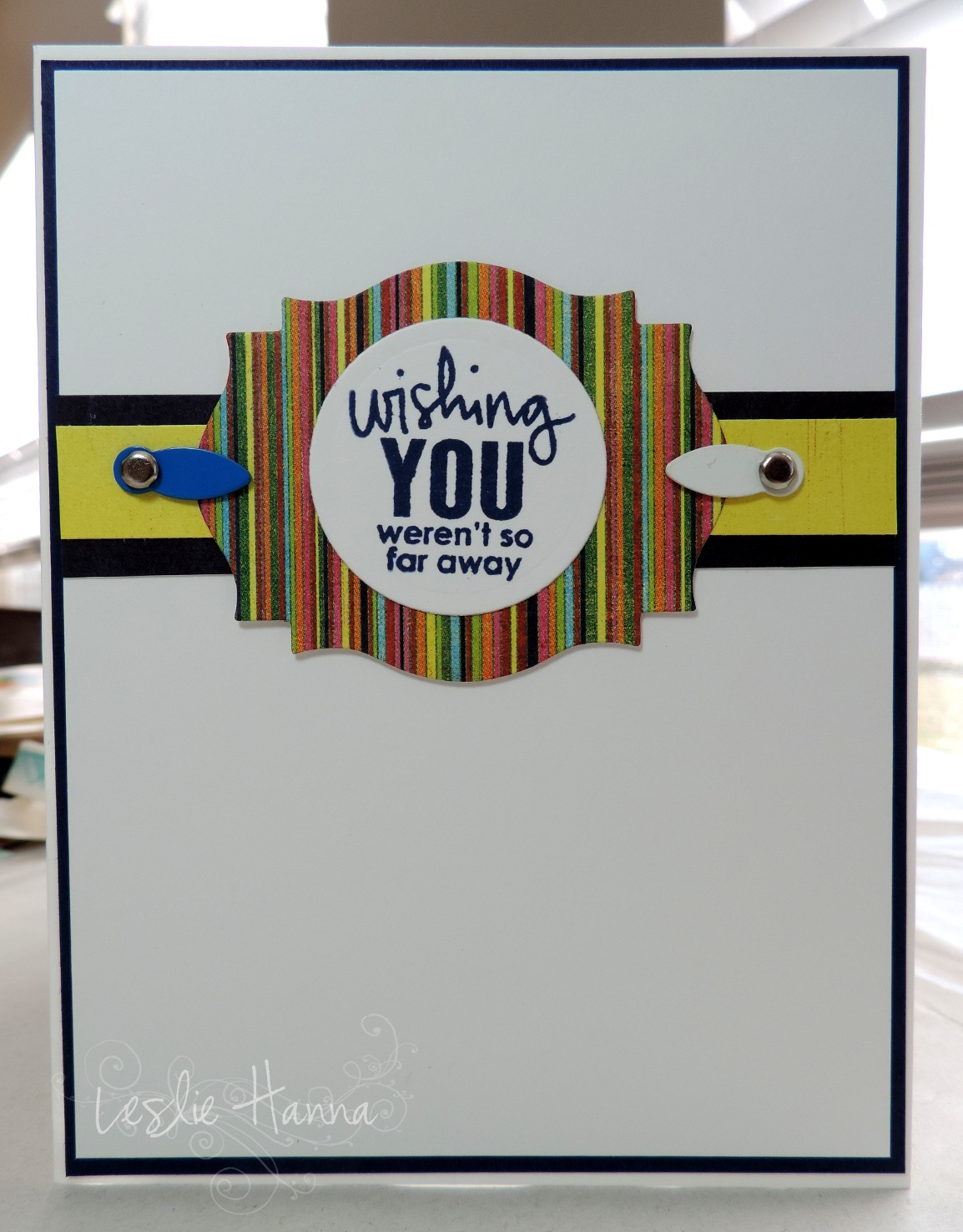 The strips of paper are also from the Lime Rickey pack. I love that Basic Grey usually includes a few solid sheets that match the designs in the pack.

The circles were cut from white, and I stamped the sentiment from the Simon Says Stamp Square Sayings set. After I put in the brads, I layered the white panels onto some SU Night of Navy, then onto white card bases.

I now have five more cards for my OWH box, and all the photo corners are gone. WIN!  :)

Now it's your turn! Go through your stash and find something you can use up. If you need ideas, please stop by the Shopping Our Stash blog to see what the other DT gals have used. Then make your project and link us up over at SOS so we can see what you've made!

(You are welcome for that ear worm.)  I don't know what came over me, but the other day I decided to scroll through my cache of digital images. I used to play the Hambo challenge every week, and I have a ton of their digital images. I pretty much stopped using digital since it means you have to color, and I am not a big fan of coloring. Then there's the whole "get to the printer, put in card stock, fight off the cat who's trying to help" part that smells of work.

So what did I do? I selected an image, sized it so six - SIX - fit on one page, trudged into the other room where my printer lives, put in some card stock and printed the thing. Then I put it on my craft desk from whence it taunted me until I used it yesterday.

I did it. I die-cut the images and started to color them. It took me ALL. DAY. WHAT WAS I THINKING?! Apparently, I wasn't.

Here is the first card: 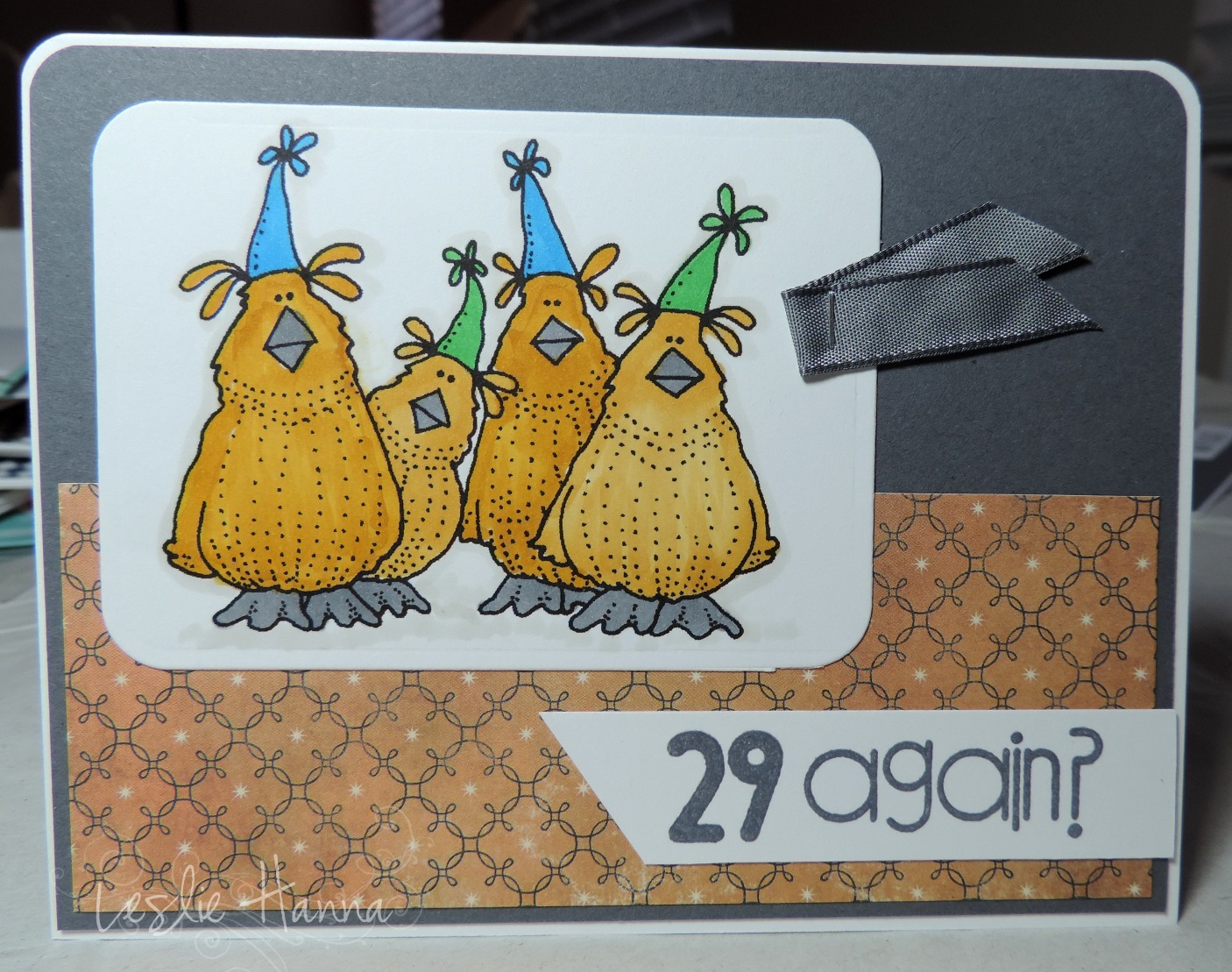 I do love these birds, even though I can't color. If I'd been thinking clearly, I'd have printed them again on patterned paper and cut them out. Sigh. For the first image I used YR23 and YR24 to color the birds, and I thought they were too dark. I switched to YR23 and Y23 for the rest of them.

This card got a piece of ribbon stapled to it since ... well, this is a long story.  Let's just say I did a poor job of removing some washi tape and I tore the card stock. Remember: there are no mistakes in stamping; only opportunities for embellishment.

The patterned paper was from The Heaplet, or maybe from unpacking a box, I don't even remember. But the pieces of paper have been on my desk for a week or two, and they were driving me nuts, so I used them on these cards. I didn't even bother to trim them to the same size, which you'll see momentarily.

Here's one with the lighter colors of yellow for the birds: 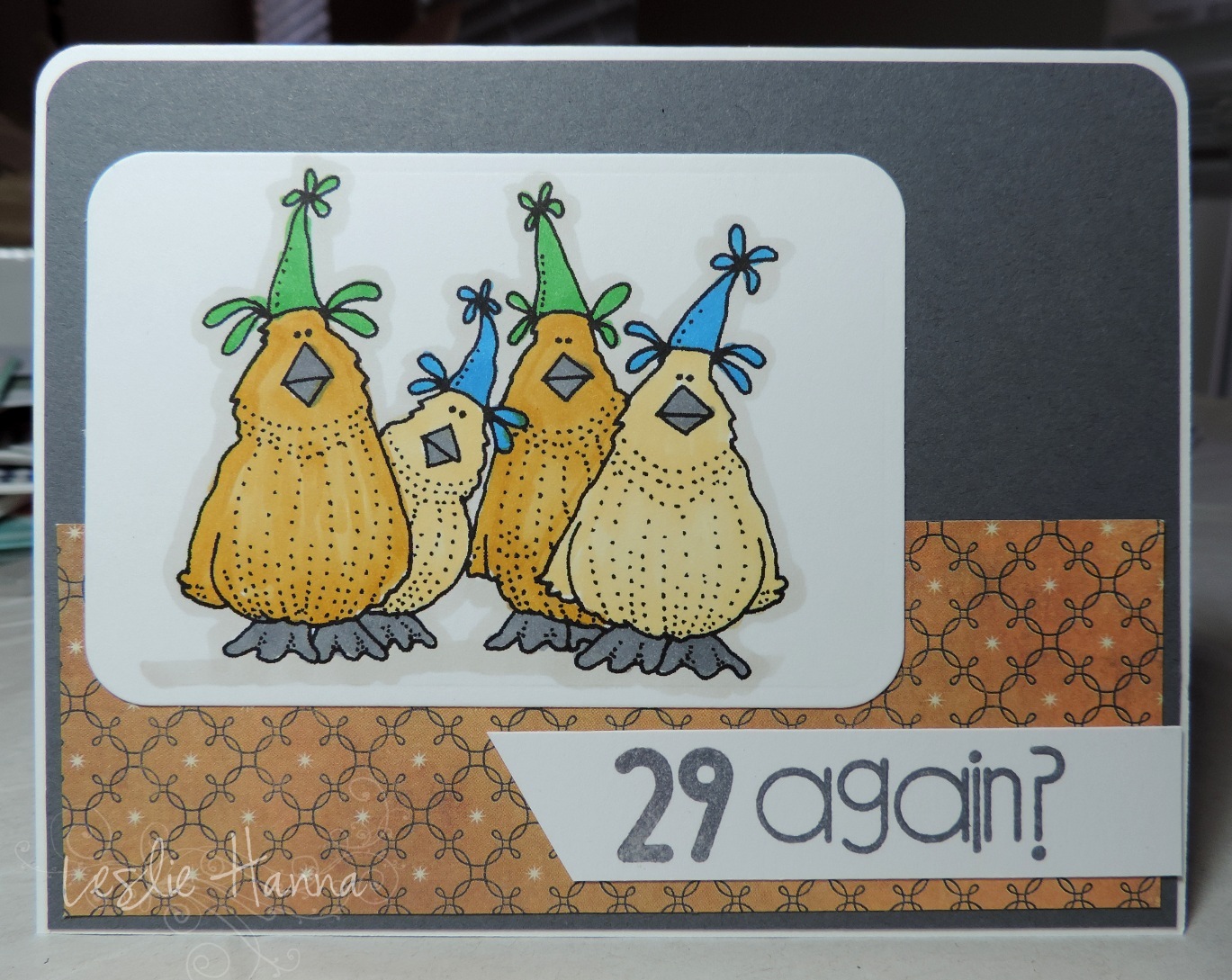 It's a subtle difference, but I do like the lighter version better.

You'll also notice I colored the hats differently here. In the first image the lower floofy bits are colored yellow, as I declared them to be feathers sticking out from under the party hats. In the second one I declared the floofy things to be part of the hats. I'm still not sure which way I like them better.

The sentiment is (sentiments are) embossed, mostly because I could:

I might be in love with the Memento Luxe inks. Just sayin'.

I used a different sentiment on one of the cards, since I needed one to include in a box I'm shipping out: 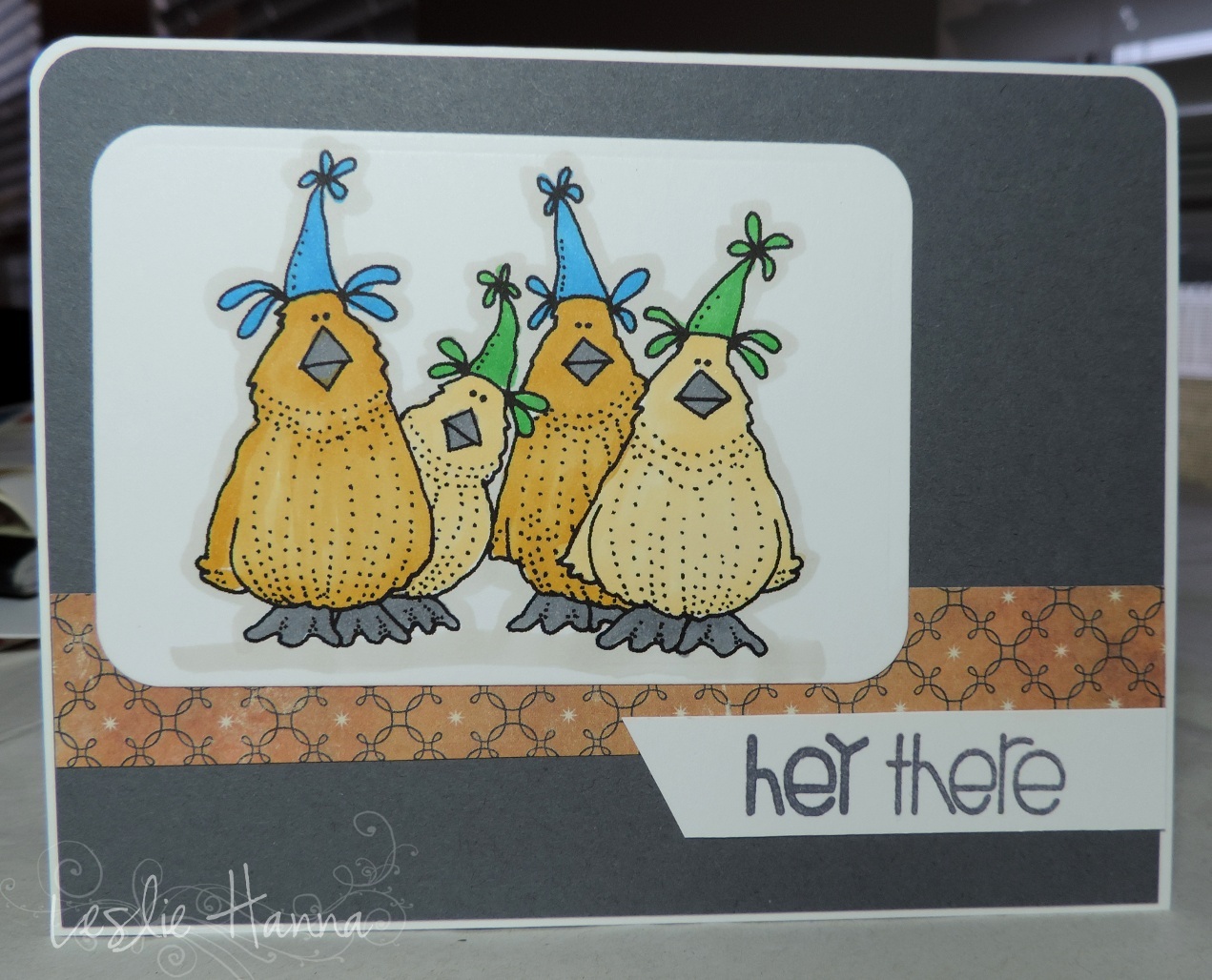 This card also has a different bit of that patterned paper, just so you know I didn't make up that part.

I actually have a few more images printed, this time from Mo Manning. I love her stuff, but I still need to color them. Maybe next week. 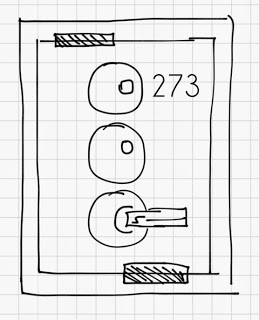 but I used squares instead of circles. I wanted to use some rounded-corner square dies I have, so I did. I layered some Hero Arts Pool papers and made this: 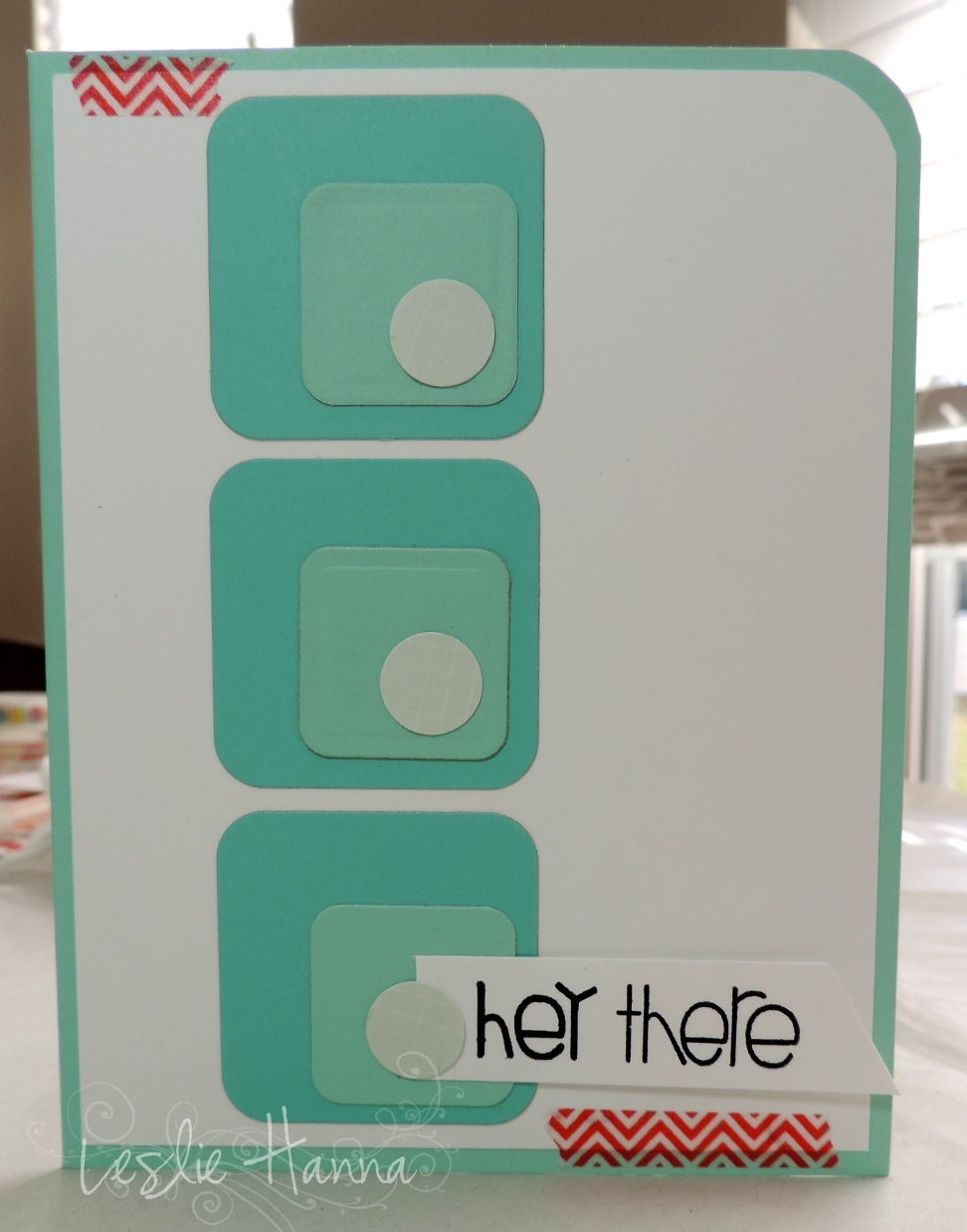 The squares were larger than I thought they'd be (no, I didn't measure first ... why do you ask?), so I had to move them over slightly to the left for the sentiment to fit. I also had to cut the washi tape in half to fit. Such are the trials and tribulations we stampers endure, especially those of us who stamp without a plan.

The circles were cut from some Hero Arts Pool Designer papers, and the white layer was attached to a note card from a Mixed Notecards Pool pack.

My last act was to chomp the top right corner with the 1/2" Chomper.

I think I'll go CASE something else next. Thanks for stopping by!