As I typed that title just now, I had a flash-back to early Thanksgiving dinners where we kids got to fight over who would split the wishbone. That was also a time when there were family members who liked the dark meat of the bird. Now that I am (supposedly) all grown up, if I cook on Thanksgiving, it's just a turkey breast, usually boneless. Even at gatherings with friends, where there might actually be even part of a bone-in bird, I can't remember anyone doing the wishbone thing.

Sadly, I just looked up the wishbone Thanksgiving tradition and the first hit was a sponsored ad for Wishbone salad dressing. Therein may lie all of the answers.

So, as I perused the challenges today, I saw Shari Carroll has a new color coordinates post up over at Simon Says Stamp: 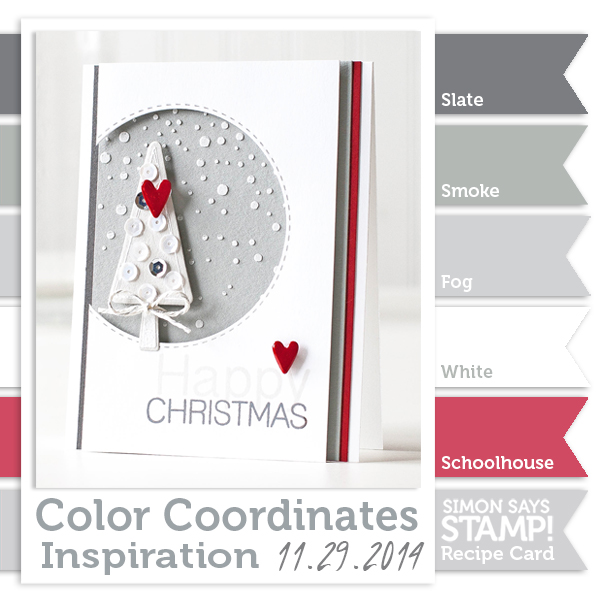 and I got an idea.

I was just whining about how I don't like to follow the crowd and do red + black + white as a classic look, but I did the other day, anyway. It still bugs me.

So I made a card based on Shari's colors, but I mixed it up a little, too. :) Here's my first card: 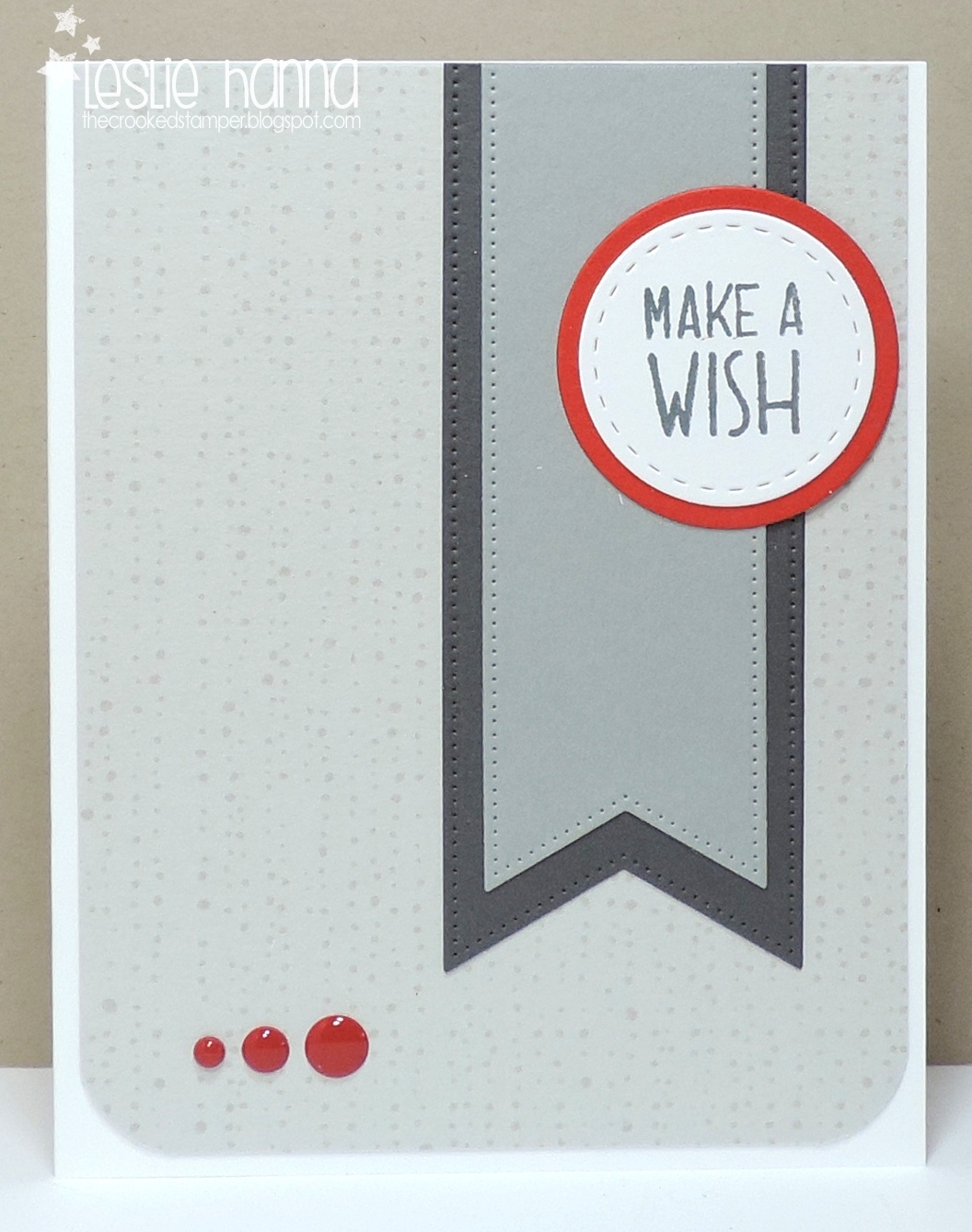 I followed a now-expired but still lovely MFT sketch: 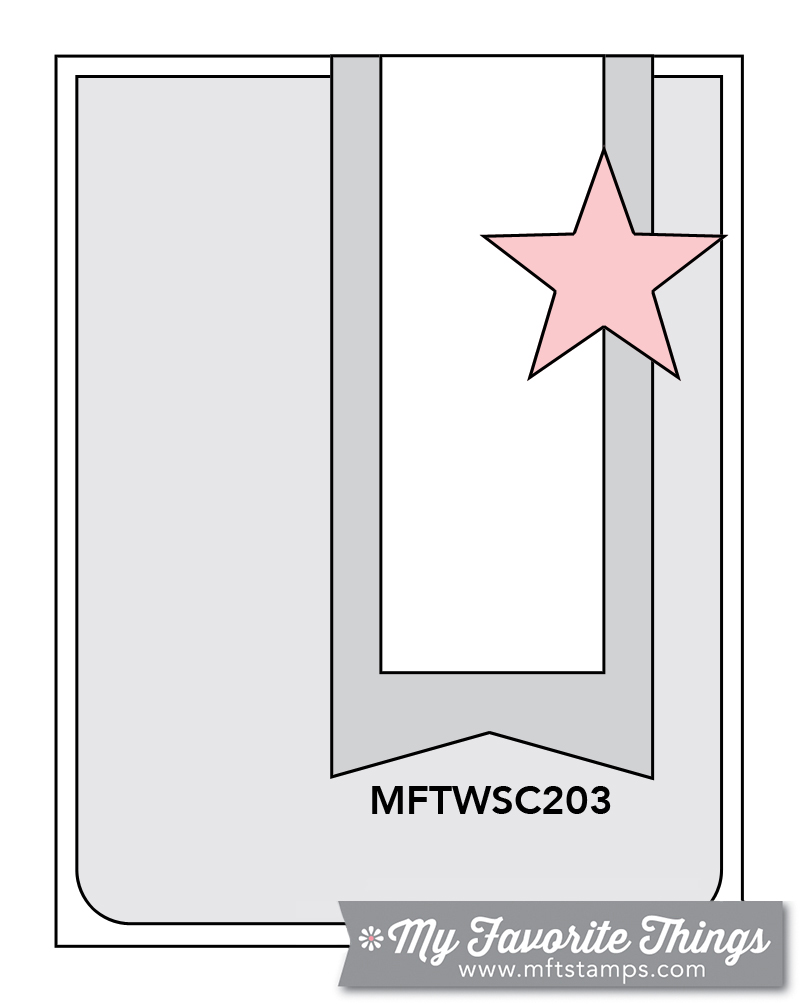 Since Shari's color coordinates were the greys plus a splash of color, I made my card all grey with just a small circle of red peeking out. I thought the card was boring, so I added some enamel dots on the bottom left, too. All better.

I also played the current Addicted to CAS challenge to use dots: 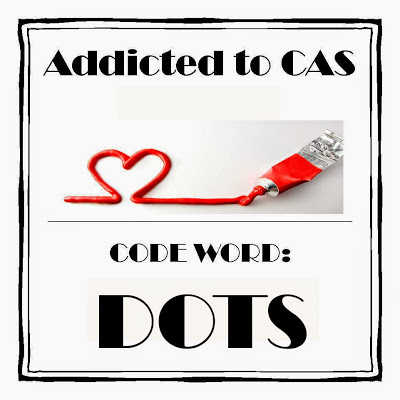 For this, I stamped a Hero Arts background onto the SSS Fog card stock using SSS Fog ink. It's subtle, but it's there: 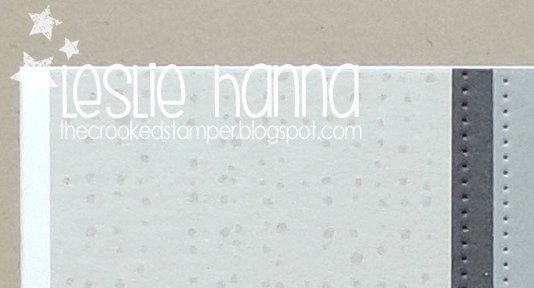 I suppose I could make a case that the enamel dots are also dots, as are the circles (very big dots) and the dotted-edge banners. I think I'm covered.

Never one to leave well-enough alone, as I cut things out I did each step three times, because I had three ideas. While Shari's splash of color was red this week, last week it was blues: 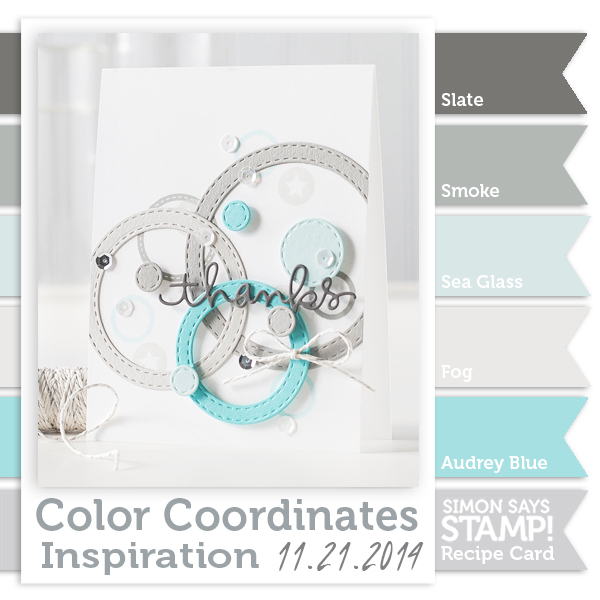 and since I'm in a blue rut these days, I made the same card as my first one, but replaced the red circle with a blue one: 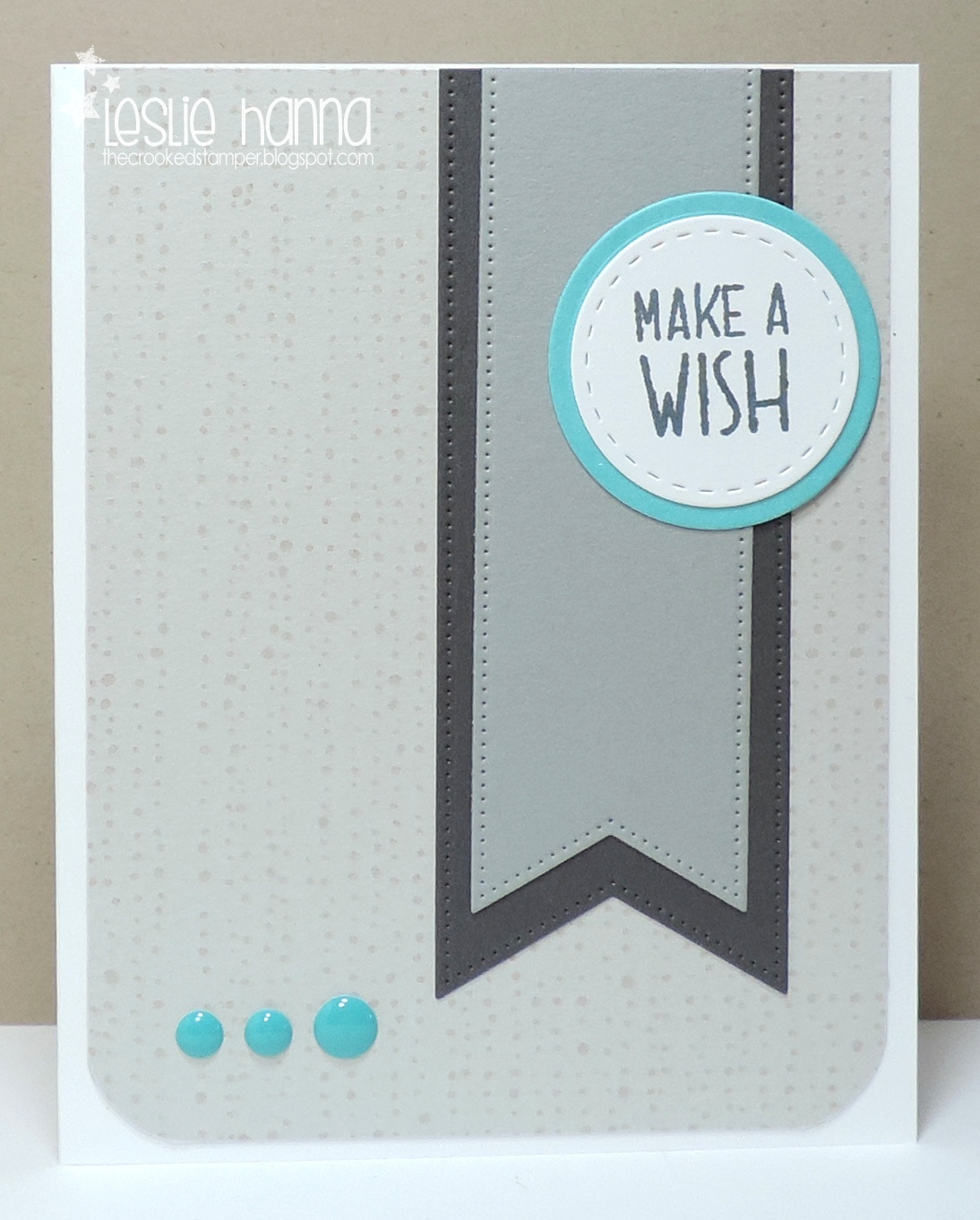 Again, I thought it was boring, so I added enamel dots.

Then my third idea combined the first two: 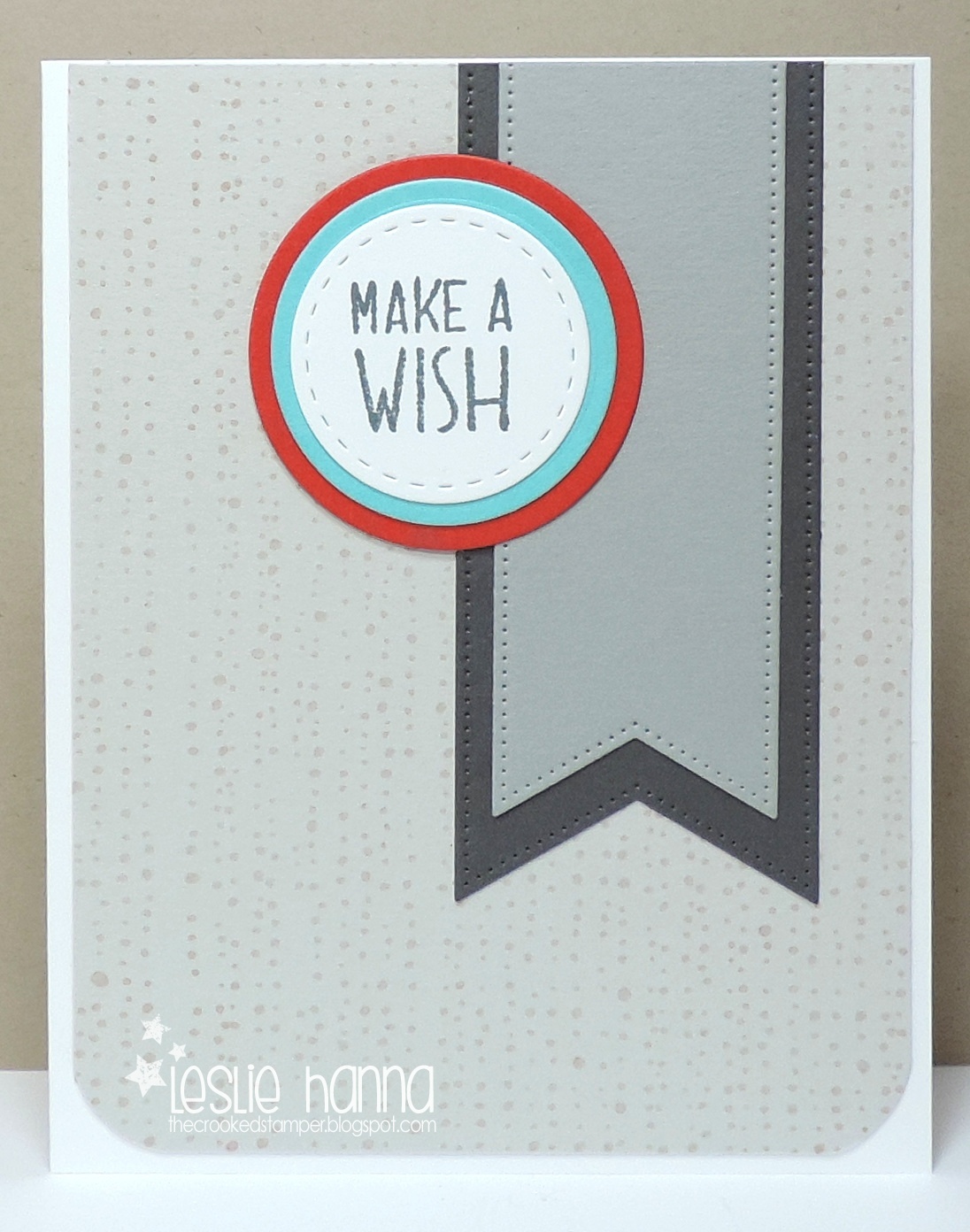 Since I stamp without a net, adding the red circle to this one made the piece too large to fit on the right side of the banner, so I moved it to the left side. This also eliminated my feeling of "it needs something", so no enamel dots here.

Except for all that die-cutting, these three cards came together pretty quickly. That makes me happy. :)

A few weeks ago I included The Alley Way Stamps challenge in my printed list: 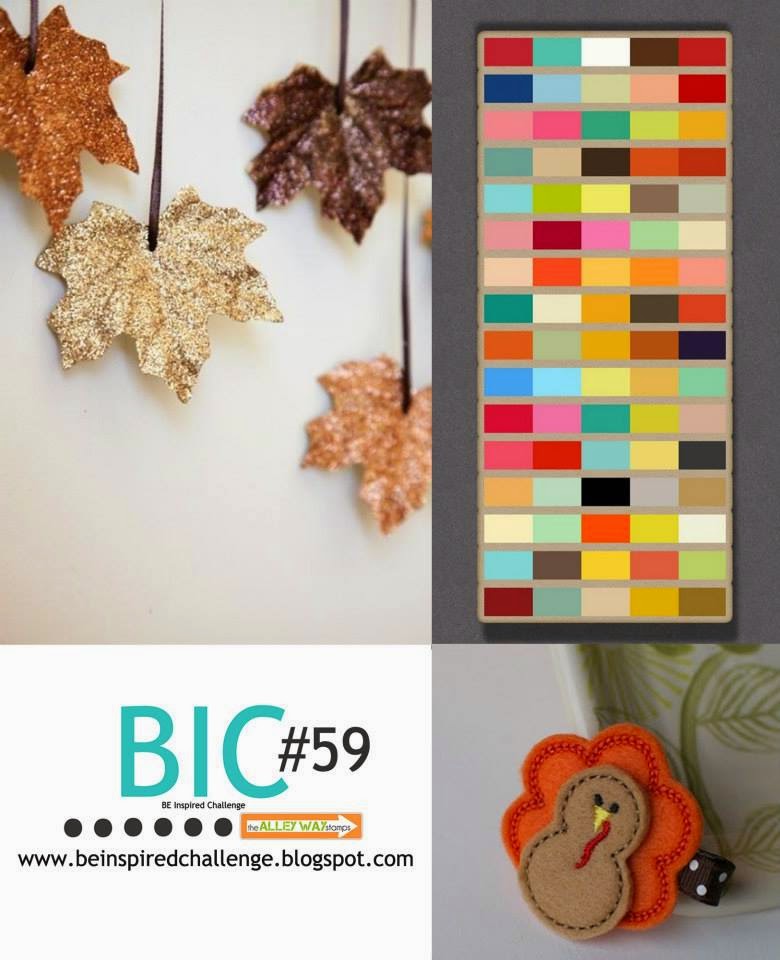 Thankfully for me, it's a multi-week challenge, so I've included it in my print-out every week this month. We're up to week 3. See? Sigh.

I decided to use the color blocks as my inspiration, and I pulled out my Birds of a Feather set I HAD to have, and I used the image that drove me to need the set to make this: 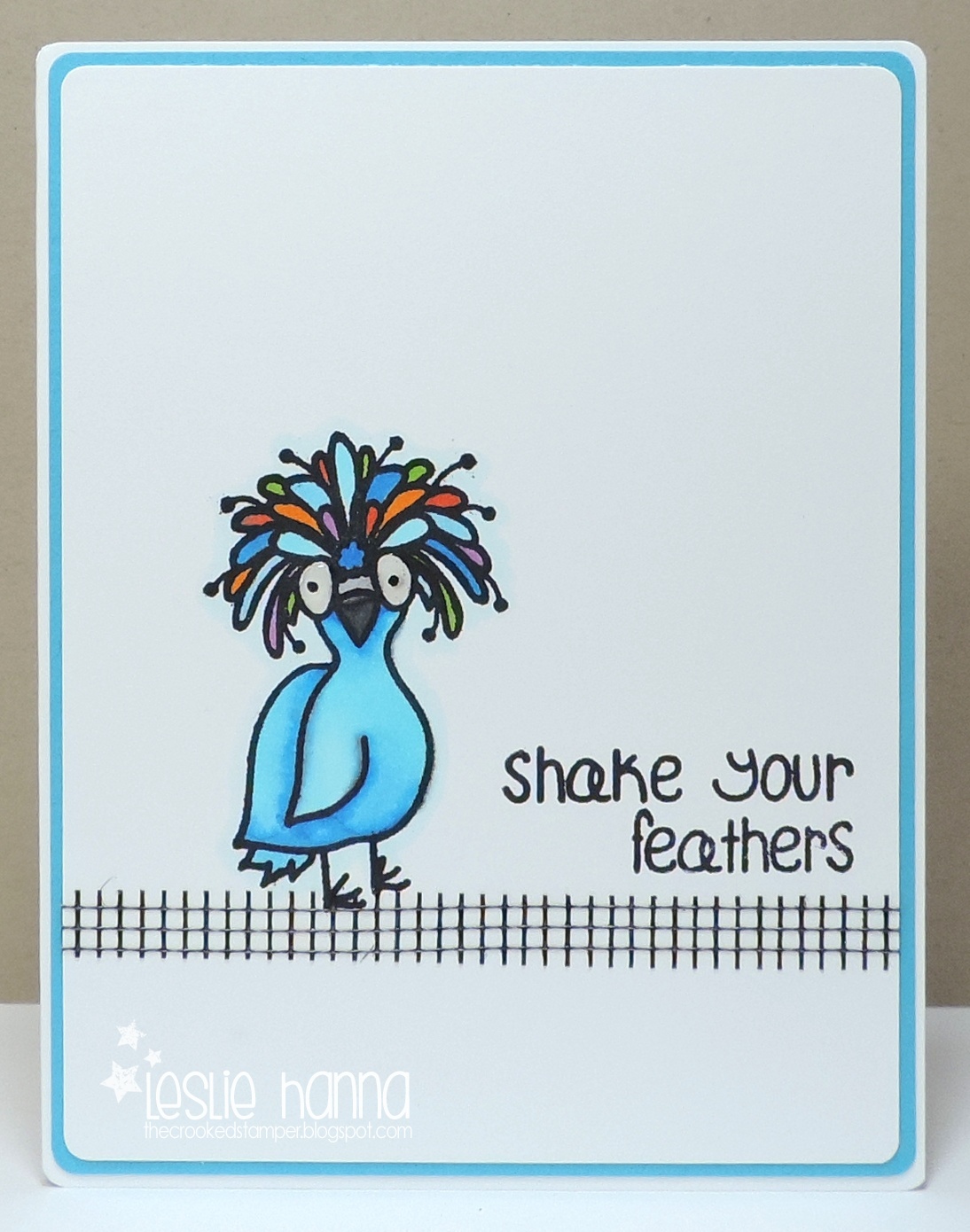 I've used a different bird from the set in the past with this same modified sentiment. Her head full of feathers didn't seem to go with the "shake your tail feathers" sentiment, so I cut out the word "tail". Actually, it was already cut out from the last time I used it. I didn't get a lot of sleep last night, so please forgive my short-circuiting brain.

That handsome floor is a piece of self-adhesive mesh that was still stuck to my trimmer. It started to get in the way of the whole trimming thing since it's sticky, so I had to rip it off and stick it to something else. If it falls, it will be a cat toy.

I chose to use blues to color the bird, and I pulled out the Copics I'd use. I had B01, B02 and B04 in my paw, but then I stepped outside my comfort zone. I replaced the B04 and took out the B06 instead. Truly a bold move for me! The Online Card Classes: Copic Markers for Card Makers class taught us to stop being afraid, and to GO BOLD, and I'm always happy when I do.

Brash up-sell: If you haven't taken the Copics class (or any of their other classes) yet, they're having a sale this weekend. GO! GO! With the Copics class, the pre-class video was worth the whole price of admission.

Now back to our regular blathering.

After I colored the bird's body, I selected several other colors and colored in the feathers. There's even a purple in there, but no (gah) pink: 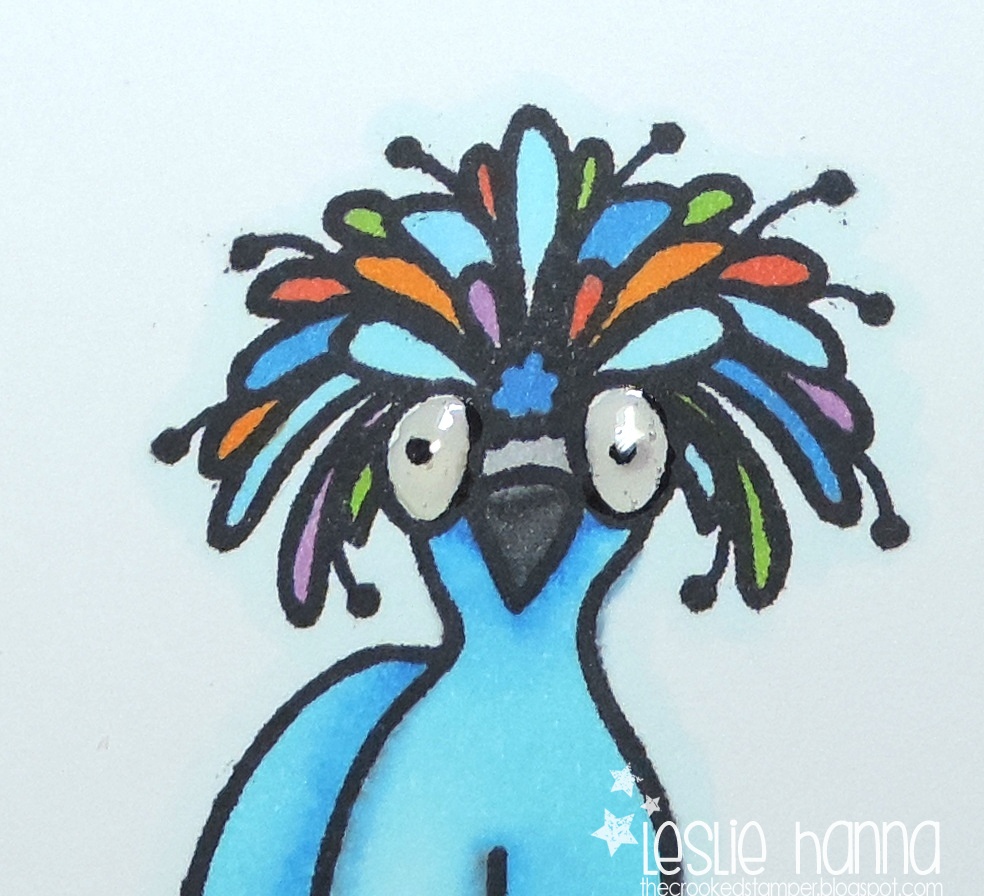 After I outlined the whole image in B0000, I added a layer of Simon Says Stamp Audrey Blue card stock. After the panel was mounted to the base, I covered the eyes with Glossy Accents.

This was fun! I really like remembering I have stamps sets and showing them some love. This whole rediscovery thing never gets old.

Stuff I used: a piece of self-adhesive mesh still stuck to my trimmer, and the following: