Apparently I am not too old to learn new tricks. Just this past week I finally figured out another secret of taming the beast that is Blogger. It took me a few months to get my uploaded photos to align without big gaps between them. Now, AT LAST, I have learned how to upload a photo so it can be viewed by the naked eye without having to enlarge it. Ta-da: 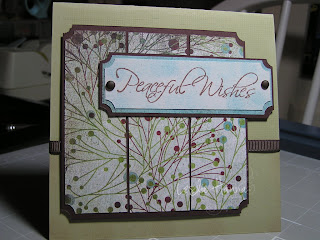 It was so easy I was floored! I have been so focussed on the Left/Right/Center option I never noticed that I had the size defaulted to Small. Well duuuuh. Once I checked Medium, voila!

First off, I have to say FIGGY PUDDING ROCKS! Since I am afraid to haunt the scrapbook stores in fear of falling victim to the ever-present "you must buy it all" tendency, I learn about new, cool stuff mostly through enabling threads on SCS. So when I saw people using the Figgy Pudding paper by Basic Grey, I had to go look it up. LOVE IT!

To save myself from myself, I ordered it online from Frantic Stamper. Believe it or not, I actually tend to order less online than I do walking into Recollections. [A moment of silence, as Recollections soon will be no more...;-(] My papers arrived today and I broke into them!

My workshops for this month are behind me, so I have a clean surface for a few days, and I set in to make a few Holiday cards for someone at work. They are supposed to be delivered tomorrow, so I kinda HAD to work on them tonight. Forget that I've had 2 week's notice - I have been busy, ya know?!

So ANYway, that first card above uses ... Figgy Pudding paper from the big pack. I wanted to do something asymetrical since it is opposite of how I normally work. I must have moved and re-layered the sentiment a dozen times before I decided on that layout.

This next card also uses ... Figgy Pudding papers, but these are from the 6x6 pack. I love that these are the same patterns but on a smaller scale, not just 6x6 pieces of the larger papers. 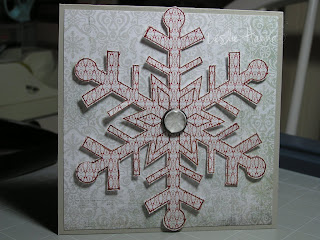 After I took the photo and uploaded it to the 'puter, I decided the card was lacking some oomph, so I went back and added a sentiment and a piece of ribbon. 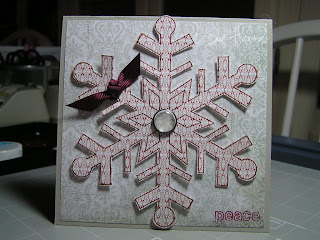 So I am pretty happy with how these turned out! I hope they pass muster at work, cuz this is all I have in me for tonight.

I may have to get more of that Figgy Pudding paper ... I really like it!