Today is my day to guest over at Libby's blog for her annual Tour de Craft, celebrating her obsession with all things Tour de France.

I must admit, I used to bike, for fun and recreation. I may be a bit on the competitive side in general, but not when it comes to bicycles. In fact, I'm about as lazy as it gets. We used to drive two hours to the Eastern Shore of Maryland so we could ride 30-45 miles of  F L A T terrain. Of course, we also ended the rides with a late lunch of crab cakes and beer, right on the water. I must admit that the two- hour drive home was sometimes a challenge, and it was a good thing we paired up so we could keep each other awake.

But my point is: I don't do hills. So this whole "let's bike up some mean mountains" mentality is just more than my brain can handle.

Also, I realized the card I had designed in my head was a large part of the very cool video Libby posts each year to educate those of us who are largely TdF-ignorant, and it's totally worth the watch. I assure it was pure accident that my card is so similar. Also, that's me at about 2:18 in the video. 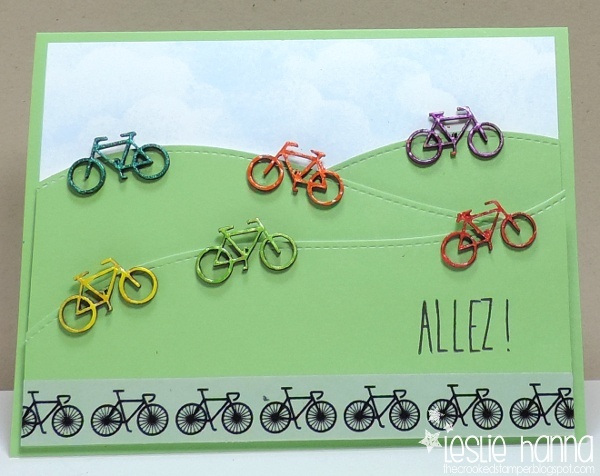 There is something else going on here. Earlier this month Libby said she was unhappy with the dullness of Copic-colored wood veneer bikes, and someone suggested Stickles. I'm allergic to Stickles (sent all of mine to someone in Canada, even), but I suggested Liquid Pearls. Since Libby ignored me and used Stickles (quite successfully, I might add), I decided I needed to use Liquid Pearls myself. I selected bright colors, and first colored the bikes with Copics before covering them with Liquid Pearls. It was quite messy, but I kinda like how they turned out.

I cut the hills using Lawn Fawn's Stitched Hillside Borders and popped up the top two layers with craft foam. This let the bikes on the first two layers kind of hover over the card., Only the one on the back hill is totally flat. Yes, this will be sent in a bubble envelope, with additional foam to protect the bikes, for probably $5.00USD. Sigh.

I sponged the sky with Hero Arts Soft Sky and a Simon Says Stamp Make A Scene Masking Parts cloud. The ALLEZ! (I think I used that last year, too. I'm so original.) was made with the Lawn Fawn Milo's ABCs alphabet.

So, enough about my card. Please make sure to head over to Libby's blog all this month to check out not only her very cool and creative cards for le Tour, but also her collection of guest artists' creations.

Stuff I used: Scotch brand washi tape, and the following: