Saturday was a great day! Perfect weather again for the Farmers Market...all that Hazy, Hot & Humid was gone. After setting up my tables, one of the farmers mentioned she had a stow-away on her truck. Apparently one of her feral cats had her kittens in the truck a while back, and even though they (the cat family) had moved out of the truck, every once in a while a kitten got stowed in there while Mama went a-huntin'. So she had discovered a stow-away when she got to the market, and he was adorable! He seemed in good shape, but the farmer told us that feral cats are not known to be the best mothers, and even though Mama would probably keep him fed, she thought that was about all she'd do for him, and she was not sure of the life span, or life quality, of a feral cat. 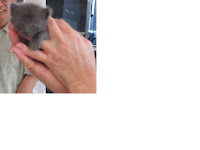 Enter the soft-hearted City Girls - one of them being me. The Blanket Lady donated a blanket and we kept the kitty in a wooden crate and gave him love by gently scratching or rubbing his back so he'd sleep. He is grey with blue eyes, and we figured him to be about 4 weeks old. He fit in the palm of my hand.

After too much handling by interested customers and with him doing a lot of whining, we got some milk and tried to have him lick it off our fingers - no go. Everyone ooh'd and aah'd at him, but no one wanted to take him home. He really was too young to adopt, as he would need to be bottle-fed for a few weeks. Some people were willing to do it, but could not because of the Day Job commitments.

Enter Jennifer, a market regular. She immediately fell in love with him, and offered to go to the Vet to pick up kitty formula and a bottle. The Vet was out, so she went to the local Pet Store and they GAVE her some bottles and formula. Then Jennifer asked us if she could take the little guy home and try to get him to eat. Since she is a regular, we were happy she wanted to help out, especially since he would be cared for in a quieter place.

Fast forward to 2:00, the end of the Market. In comes Jennifer with the kitty in his crate, and he was curled up and sound asleep. She'd taken him to the Vet, who checked him out and he was a very healthy little guy! No fleas - he looked fine! They figured he was 3-4 weeks old, and the reason he was so unhappy is he did not know how to relieve himself - who knew!? Apparently this is something the Mama cats do for the little ones until they can do it for themselves. So Jennifer got a lesson in how to do this (really!), and then she took him home to meet her two current cats. One of them is not too happy, but the younger one wants to help take care of the new guy. SOLD! She came back to tell us she wanted to keep him. And, if for some reason she cannot, then one of the gals at the Vet's office will take him.

His name is now Krum, since that is the name that was painted on the side of the crate he was in. How cute is that?

We are all soooooo happy this had a good ending! We are sure if the farmer had taken him home, Mama cat would have found him and fed him for a few more weeks, but we are all also so aware of over-breeding and all that, so getting him adopted into a City Life home was (we felt) the best option. I can tell you that cat will be loved to pieces! And we'll get weekly updates on him! Can't wait!

I have since done some reading on feral kitten adoption, and all of them say the kittens are much better off being adopted into loving homes. It helps keep down the feral cat population, and they will have much better lives. This makes me feel much better about our collective decision.

Oh, and as for the market itself, today was a very good day for all of us. Not only did we have the kitty to entertain us for the first hour or so, but since it was so nice out, everyone was out walking, most with dogs or baby strollers, or both, and the market was hoppin'! I sold a few more 'One of a Kind' cards, and the woman who ordered the Monogram Note Cards loved them! Like I've said before, it is so nice when other people like your work. It just makes my day!
Posted by Leslie Hanna at 2:46 PM