Creation abounds (and some Stash Diving, too!)

I found myself in a creative mood the past few days, so I endeavored to continue my quest to use up stuff that's been laying around way too long. I am happy to report I have been somewhat successful, too. ;-) 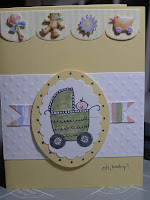 I consider this first card a Stash Dive qualifier because it includes a piece of Mike's ribbon I purchased in one of the last SCS ribbon-enabling crazes. Most of my Mike's ribbon is purchased because I 'see' the SU colors in it, but when I get it home I go brain-dead. So the fact that I used any of it qualifies it for this challenge.

As an added bonus, I broke out my old had-to-have Fiskar's embossing plates and ran one through the Cuttlebug (another must-have) to create a panel for behind the baby buggy (image by GinaK). The border was given to me by a fellow crafter, and since I am baby-card-challenged, I forced myself to use it instead of putting it in The Stash. 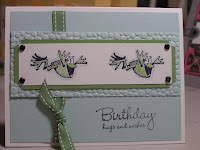 This one is a stretch for the Stash Dive, especially since it uses so much new stuff, like 2 months young new! I got this stamp a while ago because of a card I saw on SCS, so I had stamped him in an attempt to use him, but I just looked at the stamped images...and looked at them some more ... but nothing came to me. So today I rescued him from the pile of started-but-not-completed items and used him (them)! So even though everything else on the card is new, the frogs were a rescue, so it counts.
Also, I was pretty proud of myself for putting Wild Wasabi with Soft Sky. I really should credit the scrap pile for that combo, though, as they were laying next to each other in the heap. 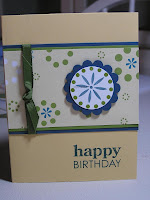 This one uses something I 'discovered' while I sorted and filed my about-to-implode scrap pile this morning, so it counts as a Stash Dive entry. Even though that scrap pile gives me so many good combos and ideas, it really needed to go, as my paper cutter was asking to reclaim its spot on the table.
The So Saffron and Old Olive card stock and the piece of patterned paper were a left-over from a long ago workshop, and just called to me to be used as a set instead of split up and put away. I added some Blue Bayou (I think that's the color ... it was a scrap...) to the layers, and also punched another scrap with the Scallop punch and stuck on a Big Pieces image. Tied on a ribbon - another one done! The sentiment is from the Three Sayings Simply Sent Kit.
So much for the Stash Diving, and on to more creative endeavors with 'fresh' card stock. 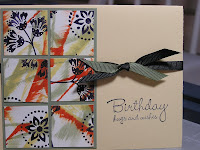 For these next three cards I tried out the Serendipity technique that was used for one of the SCS Fan Club Challenges a few weeks ago. I did my own variation of Serendipity in that I chose not to emboss anything. I just used direct-to-paper with the So Saffron, Mellow Moss and Really Rust SU classic ink pads, then stamped some images from the SU True Friend set in black. (The set is from the Holiday Mini.) I then cut the card stock into 1 1/2 inch squares and started using them.
These cards are all inspired, nay - CASEd, from this card on SCS, but I did change one or two things. The first card above has the squares layered on Mellow Moss and put on a So Saffron card base. That's black grosgrain ribbon with a piece of moss tied into the knot. 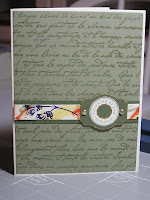 This one uses a left-over strip of the stamped paper. I used the retired French Script background and layered the Serendipity strip on Always Artichoke. I punched the Designer Label also in Artichoke, and layered one of the Circle of Friendship sentiments on top of it. I attached it with some gold brads since I edged the punched piece with the gold ziggy pen. The whole thing is layered on a Very Vanilla card base. 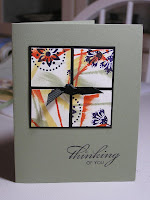 This last one could actualy be a Stash Dive entry, because today I 'discovered' (again!) some left-over Serendipity squares next to my stamp mat and I could not bear to throw them out. I layered these on black a la the original card referenced above, but since I am The Crooked Stamper, I naturally had some uneven squares. Enter the Opportunity for Embellishment, and a black knotted ribbon found its way to the center of the piece to hide the grevious error. The sentiment is from the Three Thoughts Simply Sent Kit. (Can you tell what I have laying about on my stamp table?)

Some of this creating was going on today since I was home supervising the guys installing ceiling fans and fixing my phone line. Let me tell ya, it was a day of comparing toys. Yes, toys. They pulled out a 4-foot-long drill bit, but yet they were amazed at my 1 3/8 inch circle punch. One of the guys thought we were cutting these shapes. Really! He has obviously never seen any of my work ....

Right now I have a 2-foot by 2-foot hole in my Living Room ceiling, and wires (not hot yet) hanging out of that and several other holes here and there. I have chosen to ignore the comment one guy made about a bushy-tailed critter that scurried past him while he was fishing the phone line through the ceiling... 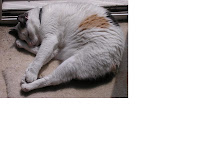 The cat is utterly exhausted from the effort to stay awake and supervise along with me today. I caught her at several points of near-coma as she tried to sneak in a few short cat naps. Little does she know the guys will be back for Act II tomorrow. I honestly do not think she will ever recover. 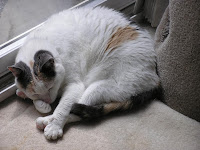 As for me, I look forward to another non-work day tomorrow. By the end of the day I shall have fannage and more light, to boot! It will be nice to be able to circulate some air when my Dining Room is filled with 8 ladies emitting much stamping energy. ;-)
Posted by Leslie Hanna at 7:25 PM