Some of my longer-term readers may remember my SYFY feature. SYFY is Save Yourself From Yourself. It's my way of recovering from a boo-boo and not losing all my hard work.

Sometimes I'll make a background I don't like, and it goes into the UFO box. It may not be pretty, but I could always die-cut something from it later.

Sometimes I try a technique that just doesn't work the first few times, and those pieces get tossed. Not worth it. Some pieces that get saved are piled up next to my work space. The pile is getting out of control ... might be time to purge.

This time, though, I was making backgrounds ala this Faux Textured Metal Paper video by  Jennifer McGuire. I was bad and didn't pay attention, and managed to rip two sides of the background. RUINED! GAH! But nooooo, my SYFY kicked in and I immediately went into salvage mode. Who said the piece needed to be A2 sized? No one, that's who!

Here's my card, then the blathering shall continue:

Since I knew I could only use the center of the piece, I chose an embossing folder that focused more on the center than an all-over pattern. Then I trimmed it down past the boo-boos and ended up with a piece about 3x4.

I dug out a piece of mystery orange paper and created a layer. I was following the current Nacho Average Challenge sketch: 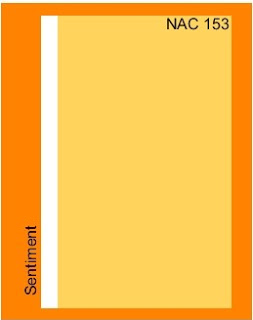 which I turned 90 degrees. I added a piece of skinny gold washi tape to the bottom of the orange piece for that sketch element, and added a Paper Smooches die-cut for the sentiment.

So that boo-boo was saved, and went to live on in a different configuration. It also shows that you can use just part of the background if you want to. So many possibilities.

Enough blathering. Thanks for stopping by!