SOS #214: Make A Spectacle of Yourself

Happy Tuesday! It's time for a new challenge at Shopping Our Stash. This week's theme is Make A Spectacle of Yourself, and we'd like you to use papers/stamps/dies that have eye wear on them. If you don't have any, the alternative challenge is to use the Spotlight Technique (can be found here on Splitcoast).

Because I totally stink at the Spotlighting technique, I thought I'd try that first. This is what happened: 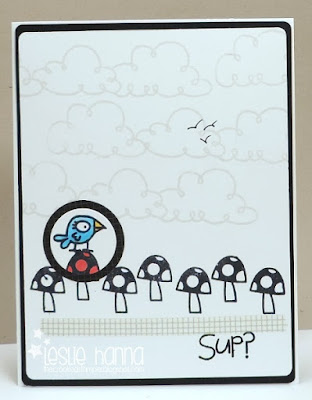 I'm pretty sure you're supposed to use something floral, but I'm ornery and contrary, so I chose a Paper Smooches set that I almost never use, and ... I used it. I stamped the mushroom row in black, and added the clouds with Simon Says Stamp Fog ink. I stamped the mushroom again on a remnant of white, and added the bird, then cut them out with a circle die. I also cut a slightly larger circle from a remnant of black patterned paper that was lying next to my paper trimmer.

I colored the bird with bright colors (he's the spotlight, after all), added a strip of washi tape to ground the 'shrooms, added a sentiment, and some obligatory birds in the sky.

Then I made a second card, this time with spectacles: 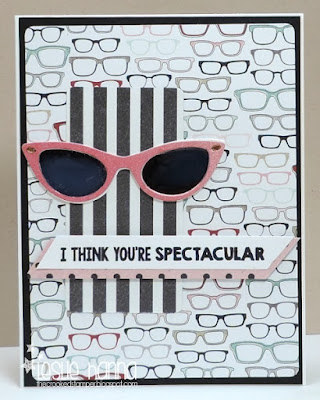 All I knew when I started this card was I wanted to use the big glasses and that sentiment. Then I spied the spectacle-themed papers in my MME Flair 6x6 pad, and the play began. I fussed with bits of remnants until I decided the black stripes made an awesome contrast to the background.

The glasses were originally green, but when I tried to "fix" one of the corners, I drew all over the green paper, so I had to cut another one, and I was out of green. Sigh.

Here is what I was trying to "fix": 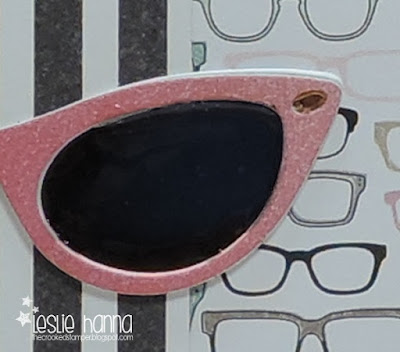 You're looking at a pixelated shot of the pink light red paper. I added black lenses and put the little black bits into the corners, but I missed. I tried coloring the corner (three layers down) with a black marker, and I failed. So now the glasses are no longer green. But I did very carefully take some Copper Liquid Pearls and a toothpick, and applied the Liquid Pearls into the tiny crevices in the corners of the glasses. I also covered the lenses with Glossy Accents.

So that's it -- my spectacle project. In hindsight, I should have used the square glasses die-cut instead of this one, but oh well.

I hope you'll play along and make a spectacle of yourself over at SOS this week!