A year or two ago, Poppystamps released the Small Blooming Poinsettia dies. I liked it because it was small. I wanted it baaaaaadly. It was sold out, since I guess everyone else wanted it, too. I finally got it, maybe even after the holiday, and had not used it (to my recollection). That changed this weekend.

I thought it would be fun to die-cut the small poinsettia out of one of my Gelli plate prints, so I chose one made with (gah) pink and green, and I cut extra leaves from the mostly-green parts.

Here's one of the two cards I made: 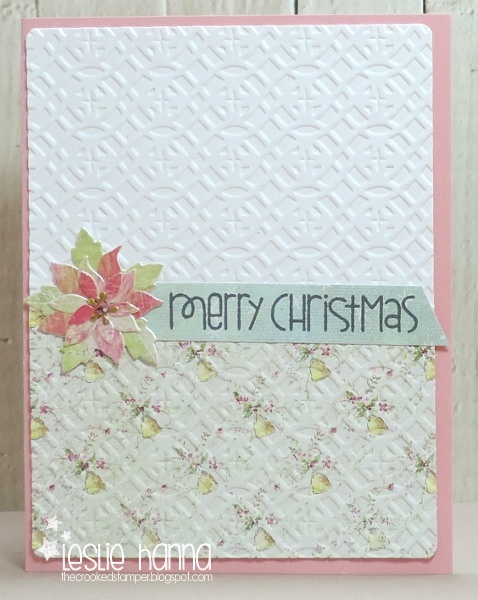 I've been in search of an easy card to make multiples of ... this is not it. However, it started out as just a piece of patterned Christmas paper at the bottom of a white panel. I wanted to emboss the top half, but the idea of partial embossing was too much for my brain at that time, so I went wild and embossed the whole thing, including the patterned paper.

I stamped the sentiment on a piece of green from the same paper pack, assembled the poinsettia, and stuck them to the card front.  I colored the tiny center of the flower with my gold Wink of Luna brush pen, then stuck it on, and added a (gah) pink A Muse gem.

Here's the detail of the poinsettia: 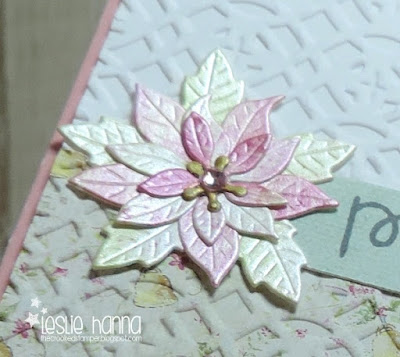 The paints I used on the Gelli panel are a shimmer paints, so the flower is quite shiny.

The second card is the same; only the flower is a bit different, as it was cut from another part of the Gelli print. Here they are, side by each: 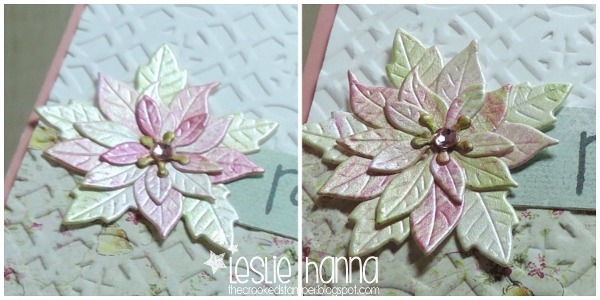 I love the variation in color. (It looks purple here, but trust me, it's pink.)

Lest you think I am embracing pink, you'd be wrong. I see this as an exercise to purge my world of the color. It is not growing on me, and will not be replaced once it's all gone. It might take 20 years, but it will eventually all be just a bad memory. I look forward to that day.

Some of the stuff I used: Gelli print panel, A Muse twinkle gems, Memory Box Yuletide 6x6 papers, and the following:

Email ThisBlogThis!Share to TwitterShare to FacebookShare to Pinterest
Labels: Christmas