The second of two cards I made at a recent crafty play date (yeah, two cards in one day - whoot), was an attempted CASE of Jennifer McGuire's recent Vellum Cards post. 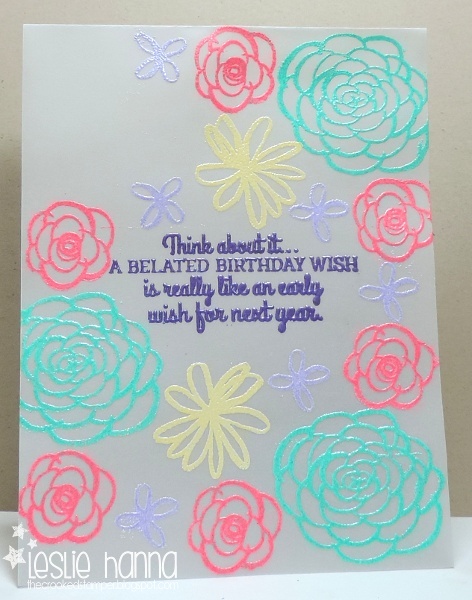 This is the second of two versions. The first is in the trash, since I didn't plan well. I wanted to make it a one-layer card, so I knew I couldn't do the die-cut part that Jennifer did. Nope, I'd need to stamp the sentiment. The first attempt left the sentiment for last, and it didn't fit, so I started over, this time stamping the sentiment first, then fitting the flowers in around it. Better.

It was all about the colors of embossing powder for me. They are so happy!

Do you see the problem here, though? Where would one write inside the card that (1) would write on vellum or (2) not show through the front? #FAIL

So it started out as a one-layer card, even if it's unusable. Details.

I added a linen paper liner and tied it with gold cord, letting the bow part hang over the bare spot on the upper left of the card. It was a plan all along. :) Maybe. 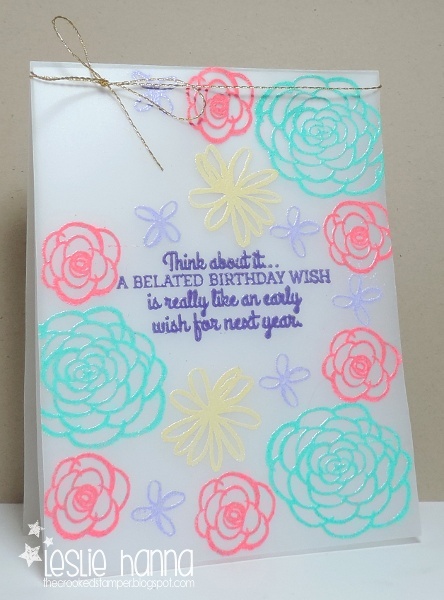 Even if it was a failed one-layer card, I'm still happy I tried it. And I might do it again, and make it more than one-layer again. A girl can only deal with so much pressure at one time, you know.