A Flurry of Activity

It is Saturday, and I am in my usual flurry of creation. First I set some must-do activities for myself... move some IRA money around, fill in the deposit slip for some checks, do some insurance paperwork ... you know - stuff. Once that was all done, my reward was to play! 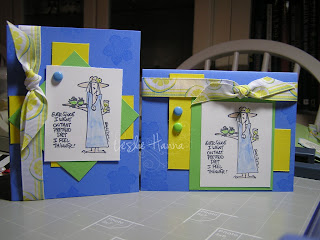 I am proud to say I used a piece of ribbon that has been sitting on my table for far too long! When I first took it out I thought it was green (I love green), but alas, it is a bright yellow and blue so it just looked green. Bah, I said, and tossed it aside. Until now!

These cards are also a bonus, because not only do I use one of my new stamps, but all the cards stock except the card bases are scraps. Double-yay! And the brads are from the same pack I used for my dog cards; they are just about half gone. Now all I need to do is figure out a way to use up the purple ones. Another day, another day. 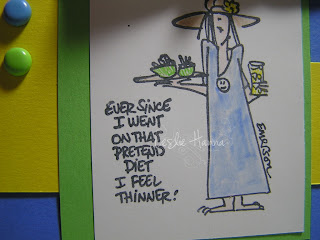 Here's a close-up of the sentiment. Love her! Then I tried a few different things with my Whine Journal cover. I replaced the paper flower with a punched jobbie; I printed the sentiment on the computer. I like that I can pick a font and change the look of a sentiment any way I want. I am such a control freak.

I am not sure if that ribbon will work if I also use Jumbo Eyelets as a closure for the book. I'll keep playing with it. 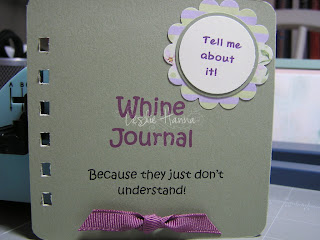 For this version I changed the printed message under the the title since I thought it sounded more whiney. The original Wine (without an 'h') Journal says "Because life's too short to drink bad wine." which is how the original Whine (with an h) saying came about. This new one just seems more appropriate for a good whine.

I also spent some time playing with the binding aspect of the book. Turns out my friend no longer has her RubiCoil, so I am trying to get better with the tools I do have. I have not bound any more, and I will not until I think I have a saleable version or two.

Then, on a break from the action, I did some blog reading and I found this item on Heather's blog: Is this a mumu? First, I had to laugh because I have not heard that word since I was a little kid! We had a neighbor that wore mumus all the time, and one year for Halloween my Dad wore one when he took the usual passel of kids around house-to-house. What a hoot! Anyway, I was impressed with Heather's variation of Lauren Meader's Onesie that I also did in an earlier post, so I had to go off and try it and then make it my own. 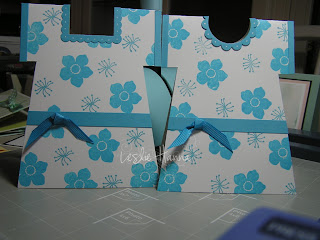 Here's my first pass, and it is sooo not "me". It's got flowers, and it's turquoise! I used two flowers from Stampin' Up!'s Fabulous Flower set, inking the larger one in Tempting Turquoise and the smaller one in Taken with Teal. The belt is a strip of Turquoise card stock and I just tied a small knot in some turquoise ribbon to make it look like it was a tied belt.

The one on the left was my attempt to make a square neckline. Unfortunately SU does not have a scalloped square punch, so I used a Marvy one. But the one on the right is all SU and therefore may find its way to a class one of these months. You just never know. 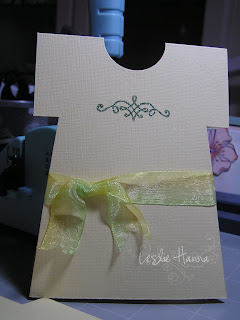 Next I tried it with Barely Banana textured card stock. Love it! I also used up - USED UP - that piece of ribbon from my stash. Yay! Baby steps.

It still needed something, so I had A Moment and thought to use the flourish from the retired Noteworthy set in my Glue Pad that I almost never use. I did that because I wanted to use the green SU Fine Cosmo glitter to tie in the green in the ribbon. I really like how it turned out! 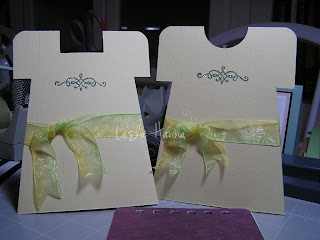 These are the two yellow cards side-by-each. I decided to round the corners of the shoulders to make them more feminine. 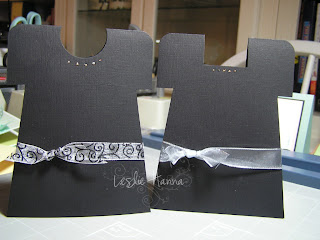 And this is my attempt at "a little black dress". Not so sure I like the ribbon belts, but they were really boring with nothing. I used Stickles to make "gems" near the neckline. Eh ... I'll see if they sell. I will have to make a template for a piece of white for the inside. Later. 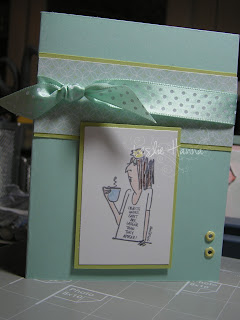 Moving on, here is another one of my new stamps. I am also trying to use my Papertrey shipment of paper and ribbon so I have less to put away next week. There's gotta be a plan in there somewhere ...

I am getting better, I think, with pairing the two greens...they at least offend me less and less. I got lucky looking for brads to use in the bottom corner. I thought I had some white flower brads I could use up when I discovered a pack of retired SU floral brads that had a color that looked like it matched the Papertrey Moss. They were Barely Banana, but I think they look great! And I only mangled two pieces of card stock before I got them aligned. They are not quite straight (surprise!), but you will also notice I only used two, not three. I decided to stop while I was ahead! 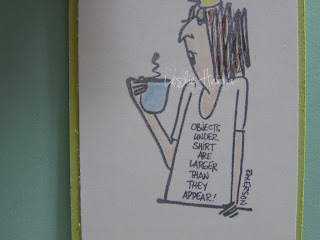 And here is a closeup of her shirt, which is the whole point of the card. I laughed out loud when I saw it and I had to buy it!

That's all for tonight. I think I need a break and will go to bed and read for awhile. Tomorrow is another day!