Yep, those three phrases pretty much sum up my Thursday. 'Twas quite a day! I think I will address the topics in reverse order from the title of the post, too.

Drunken Pot Roast, you say? A total spur-of-the moment thing, as are most of my Kitchen adventures...there is just so much "planning ahead" I can tolerate. Last weekend I decided I needed to make a pot roast this week, so I bought a hunk o'beef (sorry to any non-carnivores out there), some carrots, a few taters, an onion - you know, the fixin's for a Crock Pot stew. I generally do not eat much red meat - like once a month - so I must be low on iron. Hmmm. Anyway, Thursday morning I decided it was finally time to slice and dice, and I got everything cut and in the crock pot, all ready to go. I added my water, then I remembered I usually add some Burgundy for flavor, and is it ever m-m-good that way! But alas, no Burgundy was to be found. No red wine, for that matter, since I do not drink red wine. I had some white on hand, but the bottle was not open and that sounded like work. Right next to the white wine is an open half-gallon of Tequila. (That is a story in itself, but for another day.) As The Mind Turns ... Tequila ... Pot Roast? ... aw, what the heck! In it went!!! I have to tell you, that was one yummy Pot Roast!

Okay, on to stampin' stuff. As I revealed the other day, I am the proud owner of eleven new stamps, ten of them irreverent. Since I actually made all the red cards I had planned to make, I celebrated by breaking out the new stuff. So here we go! 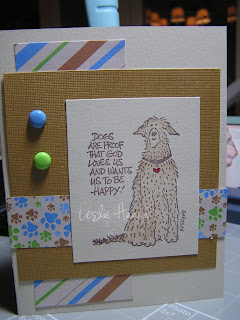 First up - something for dog lovers. One of the other vendors at my summer Farmers Market wanted to know why I had so many cat cards and not so many dog cards. I told him it was because cats are so much easier to make fun of! He told me he'd buy any - ANY - dog card I made, and that sure sounded like a challenge to me! True to his word, he would check back every week to see if I had any new dog cards, and he did buy them!

So when I see a stamp like this one, it goes into the shopping cart. This is a bonus card for me as, except for the card base, all the materials are from my stash! The papers are from a Dog Kit I had to have (to go with the Cat Kit I also had to have), and the brads are part of a lonely collection that just needed to be used. Isn't he sweet? 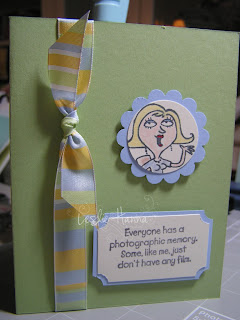 Next up are the irreverent sayings. All of these cards follow the same layout because, well, basically I am lazy, and after a day at work the ole brain slows down to a dribble, and, well, it worked. I like how it makes the sentiment the focal point of the card, and that's the whole idea, anyway!

The lady is Sassy Suzie from Stampin' Up!. I love her, but stamping the whole image with her sitting on a chair means soooo much coloring. I saw someone on SCS had done something like this - where she just inked and punched out the top part of the image. I wanted a little larger circle to get all her hair, but that is the one size punch I am missing in my Marvy collection, of course. So I tried the 1 3/8", and it is passable. And Suzie is much easier to color this way!

The ribbon is from one of the SU Ribbon Originals I had to have but never use. Use 'em up, use 'em up! Yes! 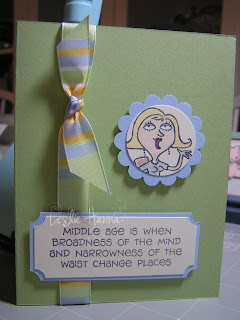 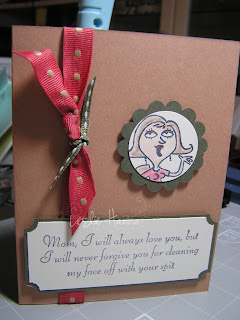 That card base is really Creamy Caramel...just blame the photographer. 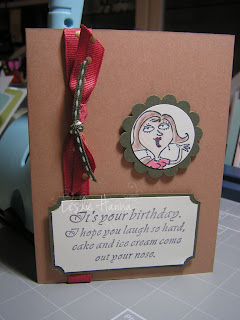 Ditto.
(See that blue handle behind the card? That is my Bind-It-All. I am now officially double-parked in the tools category with the Bind-It-All on top of my paper cutter.)
This is the last irreverent saying for today. The remaining six stamps have images with the words, so my next project will be to make mock-ups using them.

Before the next photos, a short story is in order. Last summer I decided to see if I could make wine journals. All the wine stores sell them, and I know people who keep detailed records of what wine they had, where, with whom, and what they thought about it (the wine, not the with whom). A friend of mine had just purchased a RubiCoil and she said I could use it any time I wanted, so I had the binding part all figured out. I worked on the book idea for a while and finally made up a Wine Journal mock-up or two. Then I never made any. I even sent away for some special Laura Ashley grape vellum to use as page separators! I still have all that, somewhere, too. If I stumble across one of the original mock-ups, I'll post it for posterity.
During this development process, my friend with the RubiCoil was having a hectic summer, and I got a nightly call that allowed her to let off some steam, and the stories were pretty amazing. One day I told her she should write this stuff down in a journal, because it would make a good book! The next thing I knew, I had re-printed my Wine Journal as a Whine Journal. Each page had a Rant Du Jour title instead of the Country of Origin and With Whom entries. Sooo, this year's version of that journal follows: 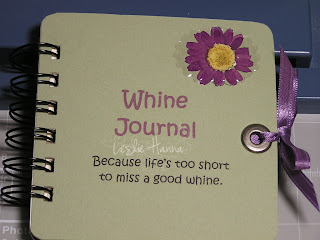 Okay, I know, it still needs work, a LOT of work. In fact, if I could, I'd rip off that flower, but it is hermetically sealed under an oval, not round, epoxy thingy. And it is a real, dried, flower (from the stash) so it would fall apart anyway. It's a mock-up, so whatever. I really need to get some big round epoxy thingies.
This is made from two coasters (from my stash, of course), covered, punched with a Bind-It-All, sporting a too-big coil (but the first one I used was too small)...like I said - needs work.

The eyelets and ribbon, also from the stash, were a last-second thought, but I think they add a little something to the effort. By the way, the larger hole punch on the Crop-O-Dile is not large enough to take the SU Jumbo Eyelets. Paper is forgiving - chipboard, not so much. I had to punch a few extensions to the original hole to get the buggers in, but that was all covered up nicely when I set the eyelets. 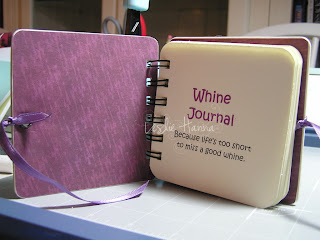 This is the inside. A miscellaneous piece of purple paper covers the inside of both coasters, and I printed the same cover title on the first linen paper page. And yes, I punched all those page corners to round them. I think it looks better that way, but it is a lot of mindless work.

Perhaps this has potential if I dress it up a little, maybe put in some pretty paper dividers or something ... I dunno. I thought being so small it might be a good, inexpensive gag gift for someone to buy along with a card. I'll probably play some more with this idea. What do you think - am I crazy. Wait - don't answer that. Do you think this project has merit? Inquiring minds want to know!
Posted by Leslie Hanna at 6:55 PM