Don't worry...I am okay, just wounded and slightly disabled. Yesterday afternoon I was finally fed up with the sticky gunk on my scissors, so I decided to clean them. Strange, I know, but that cleaning thing hits me once in a while, and I just go with it. So anyway, I have a humungous bottle of Un Du from one of my Florida trips, and it lives on my Kitchen counter, always at the ready when I am. I grabbed a paper towel, dumped some Un Du on it, and began to rub the gunk off the scissor blades. I was just about done when the perfectionist in me (she's in there, somewhere) decided to rub a little harder at a pesky spot right near the edge of the blade - that would be the sharp part. [CAUTION: GROSS-OUT ALERT.] Apparently I use my index finger to rub, as I soon discovered I'd rubbed a little too close to the edge and I had sliced open the pad of my finger. I immediately switched to the clean side of the paper towel so I could apply pressure to the wound. That bugger would not stop bleeding! It took me a while to get a bandage on it because between the time I released pressure from the paper towel to when I could slap on the bandage (we are talking a split second, here...I am a Mom, after all), I had to go back to the paper towel. I seriously thought "stitches". I finally got a pressure bandage on, but I still cannot touch it - ouch! (Whimper...whimper ...)
As for the title of this post, that goes back a loooong way, to my college days. My roommate and I would be walking somewhere, deep in conversation, when she'd break out into headline-news speaking mode. One time we were walking past the building where she had a lot of classes, and she had been talking about an upcoming exam, when she suddenly said something like, "College Sophomore Found Dead Outside McGuffey Hall, After Jumping Off The Roof, Apparently Despondent About An Upcoming Exam." Much of my first two years of college were experienced through news headlines.
I spent most of yesterday in stamping mode as I decided it was time got get my butt in gear and make cards to sell this summer. Making mock-ups is fine, but I need something finished, packaged, inventoried, and in the box if I think I am going to be ready the first weekend of May. I have soooo much to do. In fact, I realized that I had not even completed my card photo inventory from 2007, much less started on the one for this year. Yikes! Yes, I keep a card inventory - I photograph each and every card I make before I put it in the bin for sale (or mail it, when that happens.) That way if I find a particular card is very popular, I know what I did and I can make some more. Therefore, much of last evening was spent finding photos in the 'puter and printing off the remainder of my 2007 cards and watching Beetlejuice for the umpteenth time on TV Land. Love that movie!
Change of topic. On the way home from the grocery store this morning, I was driving by the farm near where I live and I heard Joni Mitchell's "Big Yellow Taxi", the one that has the line "...pave paradise and put up a parking lot...". So instead of posting a card today, I thought I'd post a little piece of history that will soon disappear from the face of the earth: the local farm. I'll post my ramblings next to some of the photos I took a few years ago when I heard it had been sold.
This is (was) one of the remaining farms in the county that had not been sold for development, and it was a blessed natural green space in the midst of all the building that never ceases in the area. It had been in the same family for over 100 years, and there were four homes on the property that included 187 acres of land. When the owner passed away several years ago, I guess the land was inheritance-taxed at its current development value, not as farm land, and the remaining family could not pay it, so the farm was sold. Personally, I considered taking up a collection, but I think we were talking millions, so it would not have worked, anyway. ;-( 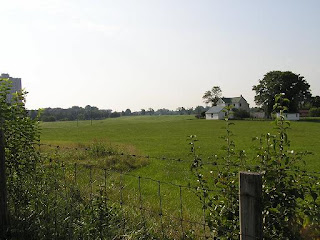 One summer day in 2006 I took my camera and walked the perimeter of the farm, hoping to capture for posterity images of what was soon to disappear. This is a shot from the edge of the property nearest to where I live, looking across (down) the length of the property. That house was not the main one, but it was the most visible. Today, all those out-buildings are gone, and the house was recently classified as Historic by our wonderful Historic Society, so it will be saved from demolition. It will be moved, but saved. Personally I thought it should stay where it is and be refurbished as a Community Center of some kind, but that's just me, and what do I know. 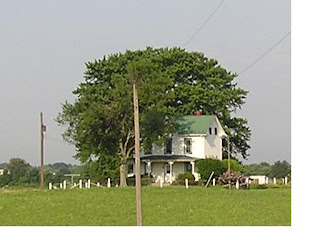 See? Wouldn't this make a nice community space? A friend of mine got married in CT last May and the reception was in an old, restored Victorian-era home that was supported by the community for the community. It would have been nice here, too. (Please ignore that pesky utility pole right in the middle of my shot.) 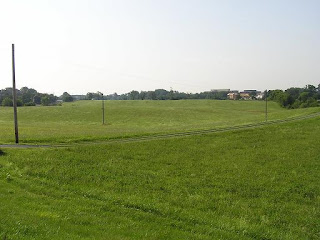 Here is a shot across the middle of the property, near the driveway to the main house that will be preserved, but more on that later. 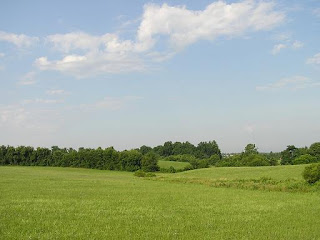 And some beautiful rolling hills, with a creek and everything ... 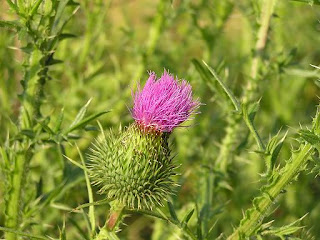 And sometimes I get distracted by the little things. I do this a lot. I'll be taking a picture of some big scenery thing and suddenly drop to my knees and take a picture of a flower, or the pattern in some brick, or a bug...like I said - easily distracted. But we need to see these things, so I am sharing. 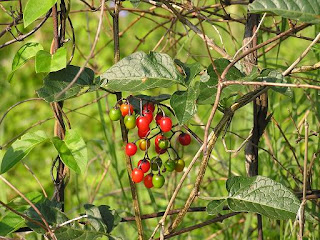 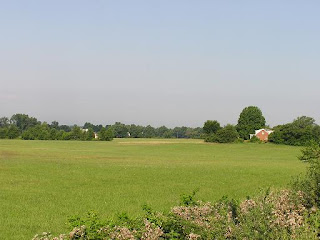 Towards the other end of the property are two houses, and this is one of them. Sadly this house is no longer standing. It is just a big empty. 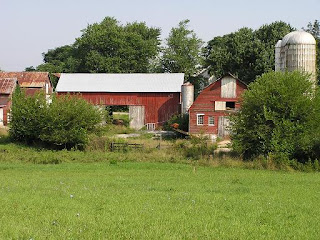 Smack dab in the middle of the property is the main house and barns, all of which have been classified as "Historic", so they will be preserved. That other house I mentioned above will be moved to the area of the property being preserved, but as to why it is being moved I am still perplexed. It is probably in the way of some massive high-density housing or something. Or a parking lot. 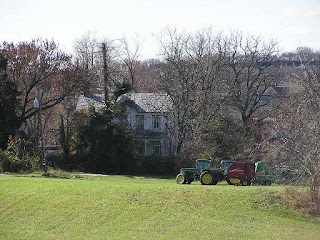 This is the actual historic farm house next to the barns.


What I did not know when I took those photos in July of 2006 was that the farm was still being worked. Look what I saw in November of that year - a harvest! Sadly, I call this next series of photos "The Last Harvest." 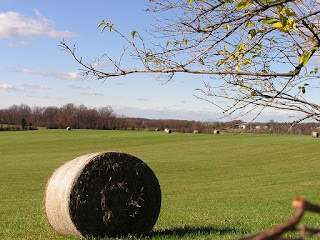 This shot was my attempt to get some 'perspective' into my picture. But it does show the big expanse of green, and a nicely-harvested field. 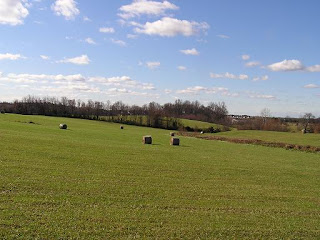 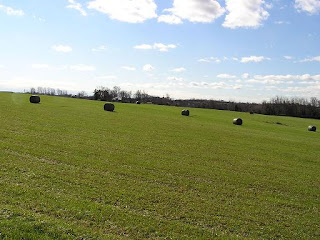 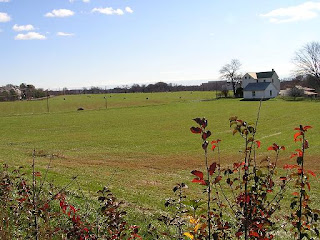 And here is a shot from the near side of the property, pretty much where I stood to take the first one I posted. 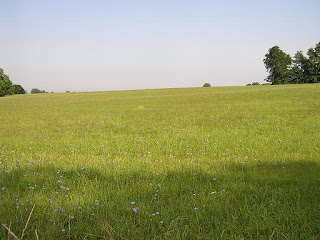 This is a shot of the far side of the farm, pre-harvest, so far over the hill that you cannot see the rest of the property. I use this photo when I make cards and I need a picture of a field. The one I have used it for so far is a cheesy clip-art picture of a man (or woman) stuck in the middle of the field with the sentiment "For a man outstanding in his field." Corny, I know.
I plan to keep these photos for when that first bulldozer hits the farm, just so I can remember how things used to be. And if you have lost a farm to development where you are, feel free to come on back here and reminisce with me.
Now please excuse me while I go work on my taxes. Hopefully my head will not explode and I can stamp something later. I may even mount one of my new sets and make some Anniversary or Wedding cards. We'll see.
Posted by Leslie Hanna at 8:42 AM