As The Scrap Heaplet Dwindles

How about that Olympic Opening Ceremony, eh? I think KD Lang stole the show, seriously. Or maybe the fiddle segment. No, I think KD took it. Man, she was something else.

I've been stampin' some more today, still working on the Scrap Heaplet. I'm really trying to disappear it like I did last Winter, and with March & April shows this year, I need to get crackin' on making cards to sell. First, I made some more CRS cards, since I SOLD 4 OF THEM ALREADY! I KNOW! It's been a banner etsy sales week, and I couldn't be happier. Here are the ones I made today: 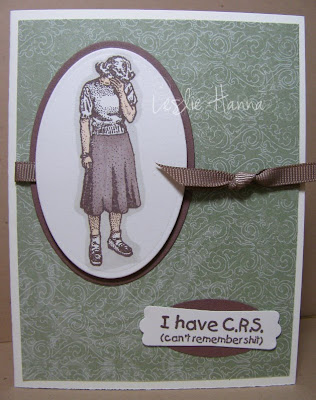 I made four of these from a scrap of SU DSP. And it's just about time for a SYFY tip. Check out my ribbon placement malfunction: 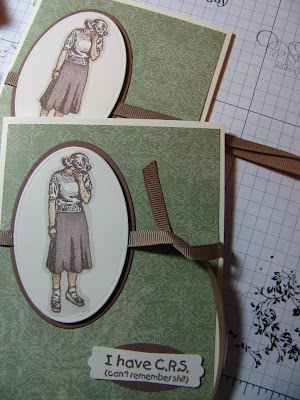 That ribbon was too short on one side to tie. Carp. Then a light bulb went off - just turn the card upside down so the short end is on the other side. That let me tie it without having to contort myself, and it was juuuuust right. Okay, maybe that was just a regular run-of-the-mill screw-up and not a full-fledged SYFY, but it's all I've got, people.

I also made a CRS card with this scrap: 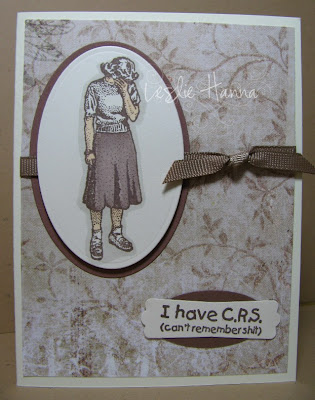 ... and I rather like it! There is a very subtle green in the background that is nearly impossible to see with my current photographer's skills.

Moving on, I had another "should I or shouldn't I" moment, wherein I debated with myself whether to toss some small strips of paper or try to re-purpose them. Seriously, I do not need to keep small strips of paper, but I was cleaning* (I KNOW) next to my paper cutter and I ended up with a stack of narrow strips of card stock, and I loved the colors together. The following steps actually occurred over a 4-week period.

First, I merely gathered the strips of card stock and admired them: 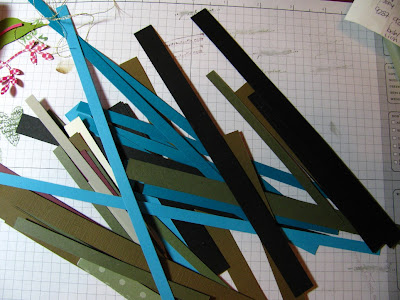 Eventually, I stuck them to a piece of printer paper: 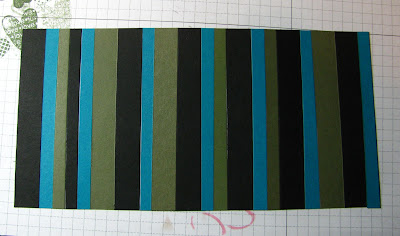 I love the random sizes! After I'd stuck them all down, just for grins I folded the paper in about thirds, and I figured I could get three 'layers' out of it. 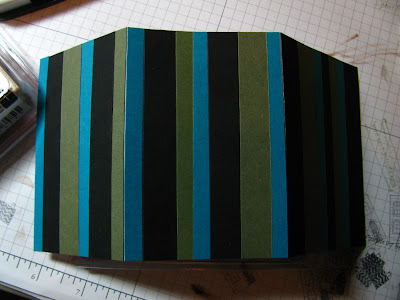 Then I set it aside in the unfinished projects area of the Captain's Table and forgot about it for a while. Until today. TODAY, I was determined to actually use the darned thing. Here is what came out: 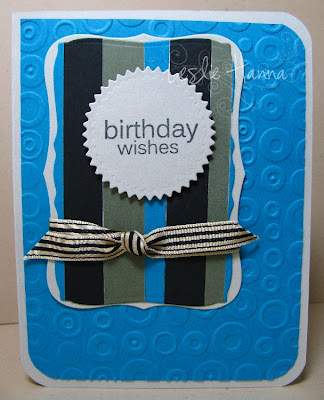 Did you notice I am once again using even more of the Scrap Heaplet by using the Sahara Sand and Turquoise pre-cut-but-never-used card stock? Yes, I am very proud.

The process: First, I chose a die that would yield the most stripe. Then I put the cut piece on top of the turquoise and I hated intensly disliked it. It needed contrast. I decided not only did it need contrast, it needed to be toned down, too. What to do, what to do.

I went with another piece of Sahara Sand for an under-layer and chose a die that just barely showed out from under the striped piece. I knew I wanted to put a sentiment in a pinking circle, so I opened, mounted and used one of my new-to-me PTI sets. And to further break some rules, I stamped it on scraps of Sahara Sand instead of Vanilla or White. I can get really crazy sometimes.

Ribbon. I wanted ribbon, and I wanted it to be horizontal. I went through my Box Of Every Color Of Neutral Ribbon But The One I Need, thinking I wanted something twill-y or maybe grosgrain, when I spied this piece of slippery stripey ribbon, and I liked. I really liked.

Then, the turquoise layer. Too too. I couldn't decide if it was too big, or too plain, so the first thing I did was emboss it with a Cuttlebug folder, then I stuck the striped panel to it off-center with the plan to trim down the turquoise piece. I still wasn't sure, so before I trimmed it, I rounded three of the corners. Yep, only three. Why? Because I'd already stuck down the striped piece and the corner chomper didn't fit. And here you thought I'd gone all artsy-fartsy on you. Not a chance.

Sticking with the three-rounded-corners on the blue layer, I rounded the same three corners on the card base. DONE! And I like it just the way it is.

As with most of my forced projects, I futz and futz until I either stop or just throw it away. I made three of these, so I must think it has merit on some level. The BEST part is that piece of striped paper is gone, gone, GONE!

In other news, I actually left the house today to run some errands. I hit the PO and mailed the 4 (FOUR!) etsy orders I had. I went to PetSmart to inquire about the cat grass I ordered two weeks ago... seems it never got communicated, so I re-ordered it and bought everything they had on the shelf while I was there. Kitty needs her cat grass. I went to Chloe's to check on sales, and I've sold 5 cards in as many weeks. Not bad, not bad. I also re-stocked the basket with a few newer models. Lastly I went to Whole Foods and picked up a few items that resemble food. And I got home by 10:30 am. The End.

I plan to continue work on the Scrap Heaplet, because heaven knows I don't want it to become a full-fledged Scrap Heap. I think I'm making pretty good progress, too. One of these days I may even make some Easter cards for my March show.

For those of you local to me, check out my show schedule. I'm also posting some of the cards I show here to my etsy store. (Link is also in my side bar.)

That's it for now. I plan to stamp some more in between watching the Olympics. Have a good rest of the weekend, and thanks for stopping by!

*Cleaning. Cleaning cuts into stamping time, so I clean when things get desperate. Desperate = dishwasher is full of clean dishes so the sink is full of dirty dishes, so I have to empty the dishwasher to fill it up again. Desperate = I am out of clean underwear, so I need to do a load of wash so I can go to work the next day. (I've tried just buying more, but I have no room to put them away, so I have to do a wash.) And in craft-land, Desperate = there are so many scraps next to the paper cutter, I have to angle the paper under the blade from a mostly-vertical direction, and it won't lay flat to cut. I'm sure some of you know of which I speak.
Posted by Leslie Hanna at 3:15 PM