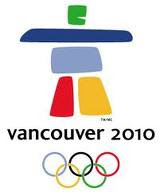 It's been an Olympic Week for me - staying up too late watching whatever the powers-that-be feel free to feed us on delayed tape. I.love.the.Olympic.Games.

This means I needed to turn ON my TV, which is in the Living Room, and since I've set up the Captain's Quarters and working in there, let's just say my craft has been sorely neglected this week. So I've decided to do a Random Friday, filled with weird things about my life in the past few days.

1. Last week, one of my peeps asked to ride into work with me on Thursday & Friday of this week. She planned to pick up the Metro by my office and head into DC from there. This was a super idea, not because I could be nice or anything, but because I could yap on the way in and kindof forget the stoopidity on the roads.

I did warn her, though, to remind me not to forget her, cuz as most of you commuters know, the bod goes into auto-pilot some mornings. So Wednesday night, I get an email entitled: "Please don't forget me!" I, of course, HAD forgotten, so I ran to the Kitchen and taped this to my front door: 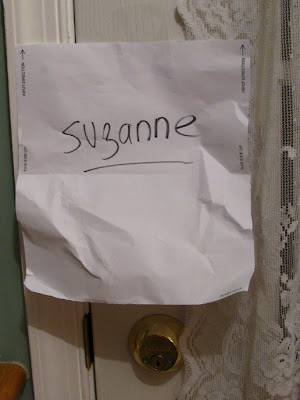 And it worked! Both days! So Suzanne - it was a blast, and if you ever want to spend time with me instead of your hubby, you just let me know. :-) I can make a new sign.

2. Olympic FEVER is here! Several of my Tweeps are in Canada (one is in VANCOUVER!) and as soon as we all saw pics of the very cool Olympic mittens, we HAD TO HAVE THEM. Several shopping trips later, packages were mailed and lookie what arrived chez moi tonight: 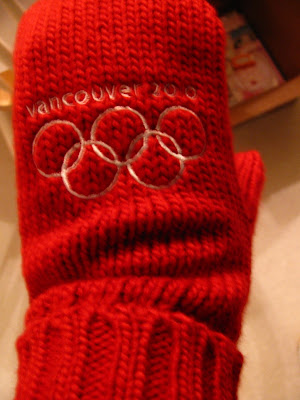 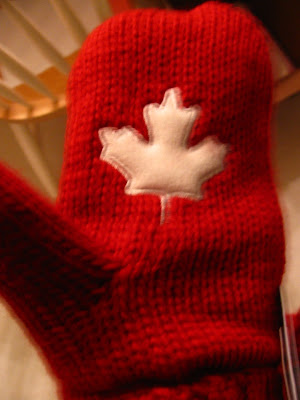 Aside from the fact that they are out of focus, aren't they adorable? And sooooo comfy. I feel so special now. :-)

3. I am not a chain letter person. I am always the one to break the chain, and look, I've lived! Now on Twitter, there is a much faster version of a chain letter called a ReTweet (RT for short). It's where you re-send something someone sent to you. A lot of companies use this as contest entries and they give away stuff, but you know me, I don't need anything! Lordy, where would I put it? I already don't use most of the s-crap I have!

Enter the Fiskateers, ambassadors for Fiskars. They had a RT thing for a chance to win cool Fiskars stuff (and who can't use Fiskars stuff?!), and you needed to RT their message AND mention your favorite crafty Tweep. We started Retweeting each other, and guess what - I WON! Seriously! My loot arrived this week - check it out! 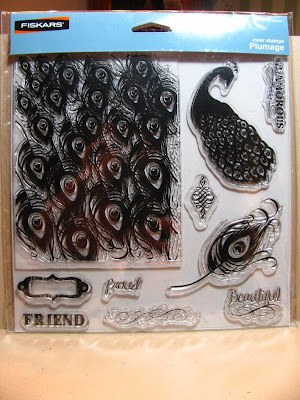 Is this not a VERY nice stamp set? Oh, yes. I know exactly what I'll be doing with this! Stay tuned for that.

Also included in the box was all this crafty goodness: 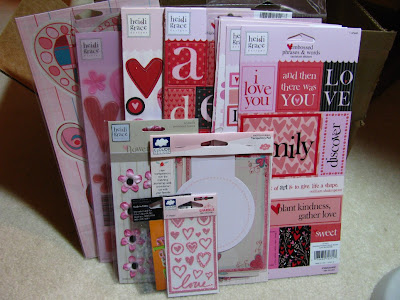 4. I was weak. I placed an order with Ellen Hutson and bought some Lockhart stamps, some bling, a bunch of Graphic 45 papers, and a mystery MS punch. I must have hit the wrong button to add to my cart. Hmph. I haven't decided if I'll try to exchange it or maybe even use it. I'll be sure to note the use of said goodies when they see ink. Some day.

5. I'm back to my annual decision of "should I go to Convention in SLC this year or not?" Aside from the expense, and the fact that I am not a Career Business Demo, it's the getting there that's a problem.

You see, I detest flying. It's not the actual being in a metal tube 5 miles up in the air that bothers me, it's the crowds and cell phones and rudeness that is everywhere. I have a very short fuse when it comes to all of these things, and it's just easier for all involved for me to stay home.

Or I could drive! I love a good road trip, but the last time I went to Utah it took us 3 days "balls-to-the-wall" as my traveling companion referred to it. And that was to Eastern Utah, and SLC is way West of that, so figure 4 days. Each way. Plus 5 days in SLC. I'm looking at three weeks here, people! Because if I'm taking that many days to drive, I'm stopping along the way!!!

Someone suggested this was crazy talk, and I needed to figure out how to survive a flight. Enter: the iPod! I got an iPod! YES, I DID! I've just started to play with it - buying songs online and loading my plethora of CDs. I figure by July I'll have enough music to last me the whole flight, and then some. I could do this!


Enough for you? Yeah, it's been a crazy week. I have my Stamp Camps this Sunday and Monday, and after that I hope to get inky again. Real inky.

Thanks for stopping by!
Posted by Leslie Hanna at 7:20 PM

Email ThisBlogThis!Share to TwitterShare to FacebookShare to Pinterest
Labels: Ramblings