Rumors of my death have been greatly exaggerated! I'm not dead, and I haven't been very stampy this week, either. Why? Well, it's certainly not for lack of supplies! Nope! I'm taking the online class by Tim Holtz called Creative Chemistry 101, wherein he's trying to teach us all how to use the Ranger products most of us already have. It's actually quite embarrassing. 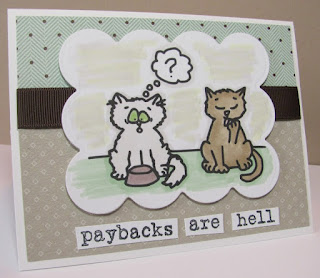 I thought these two were too cute! Now that I look at it, though, that sentiment was meant to be spoken by the poor kitteh who's had his dinner stolen. I'd like to think in the next frame he'd be glaring at his brother, thinking those three little words. So this card makes no sense, much like the rest of my week.

In other news, the annual DC cherry blossoms are at their peak, like, TODAY! Here are some photos of the Tidal Basin which is famous for its cherry trees. I particularly like #2 and #5. I drive by a few neighborhoods every day whose streets are lined with these trees, and they are gorgeous. It's also the 100th anniversary of the year the Japanese gifted DC with some cherry trees - 3000 trees, to be exact!

PS: The Honors Gallery is up at Splitcoast. If you played the VSN challenges a few weeks ago, or the mini VSN back in February, the hostesses have each selected a couple of their favorites from their galleries. Go check them out, here!  And thanks to everyone who played!
Posted by Leslie Hanna at 9:12 PM