Sometimes You Just Need To Walk Away

Just Walk Away is my motto as of late. I spent so much time this past weekend making pretty trash, that I decided I sometimes I just need to walk away from something and come back later. When I come back later to an OMG NOT AGAIN disaster, I generally see it with fresh eyes and a better, less frustrated attitude. 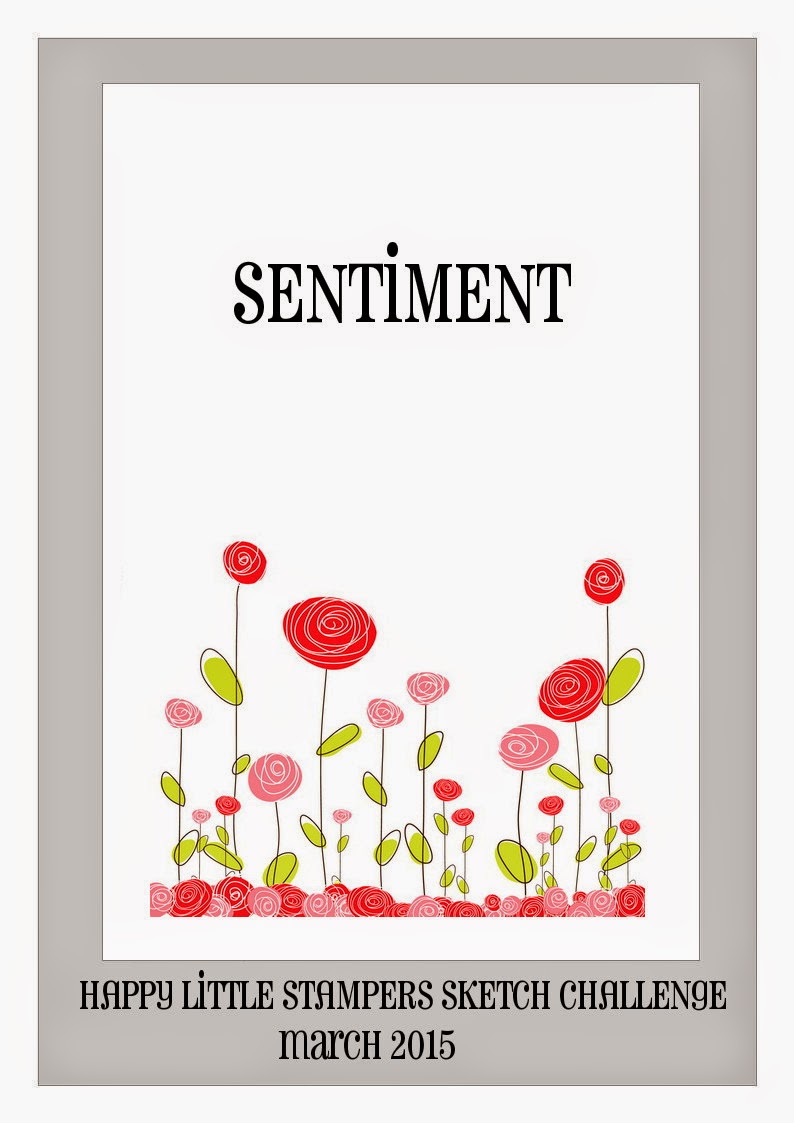 I saw an opportunity to use one of my neglected dies, and after several failed attempts of inlaid die cutting, I had to go take a nap. I went back to my table and tried with a different flower die, several times. I finally had to walk away. I might be stubborn.

Today when I entered the inner sanctum that is my craft room, yesterday's last UGH attempt was staring at me, and I saw a way to save it. ALL WAS NOT LOST!

Here's what I ended up with: 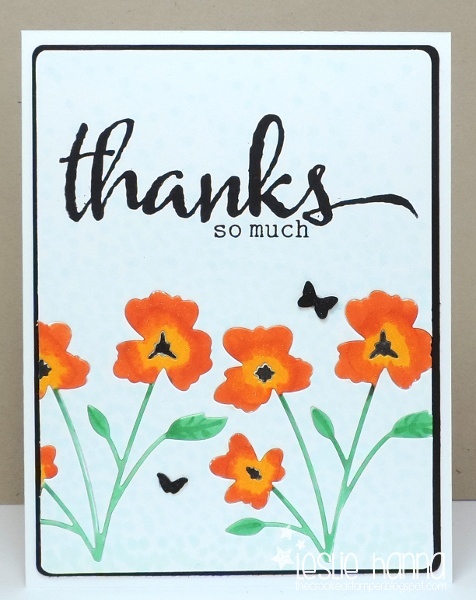 And no, the background isn't dirty. It's covered with dots of a Copic marker. The white was making me itch.

The flowers were cut from white card stock and colored with Copic markers. I then die-cut a white panel twice to make room for the colored flowers. I stuck a piece of printer paper behind the white panel, then placed the flowers and all the white filler bits in like a puzzle.

After hours (days, technically) of work, I was not going to ruin this card front by stamping poorly, or crooked, so I broke out my MISTI. I know others have made pretty darn good videos about how to do this, but I took photos, so I feel a burning need to share.

One of these days I'll get my tripod set up again and make a video. It's on my list of things to do now that I'm retired. It's only been a year and a half ... what's the rush?

So here's my step-by-step of stamping a sentiment using the MISTI.

Step 1: Place your card front in the corner:

Step 2: Position the temporary grid over your card stock: Step 3: Position your stamp, using the grid to hopefully get it straight: 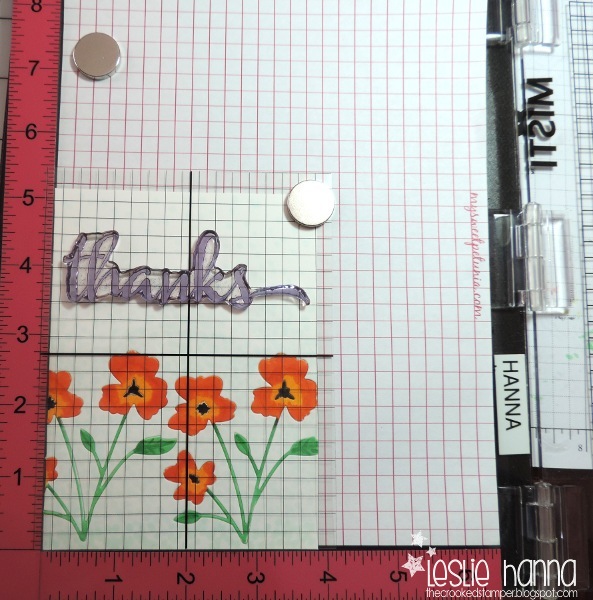 I think mine is still a little off, but you can get yours straight. Also, using this grid over your card front is a nice bonus in case you didn't clean your stamp 100% last time you used it. That may or may not happen in my world. Just sayin'.

Step 4: Close the lid to pick up the stamp: 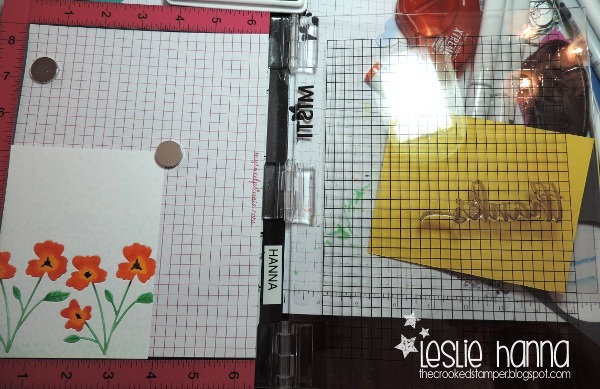 There it is on the right, with a piece of yellow card stock behind it so you can maybe see it. Please ignore the other s-crap also collected under the lid.

I inked it up and stamped it, and yep, it wasn't a good impression. NO PROBLEM, since I was using the MISTI! I just inked it up again and re-stamped. 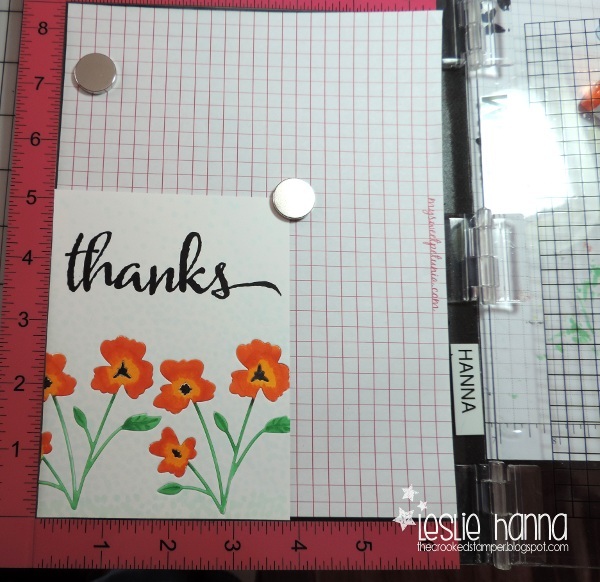 Not one to leave well enough alone, I had a hair-brained idea to add a so much under the thanks. I used an acrylic block for this instead of the MISTI. Don't ask me why.

One tip for getting the two words lined up with each other: use a ruler. I pushed a ruler under the two stamps until I liked their position, then just picked them up with a block:

Apparently I was still not done. I have some black die-cut butterflies out on my work space, and I felt compelled to add two. I used some Matte Multi-Medium to attach them.

Here's another tip (no pun intended): I find I squirt too much of the multi-medium on my work area for these tiny pieces, and I waste a lot of product. I bought a few small applicators (linked below) and thought about pouring the multi-medium into one of them. That sounded like work. I then realized you can pop out the pointy top part of the small multi-medium bottles and the cap from the applicator fits perfectly. Like this: 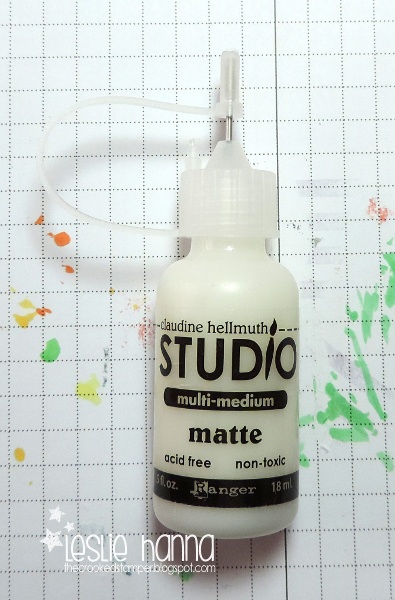 For my last act, I covered the flowers and butterflies with clear Wink of Stella. Why not?

Wow, that was a long post! Thanks for reading this far!

I think I need a nap now. Thanks for stopping by!