It's Tuesday and time for a new challenge at Shopping Our Stash. This week's title is Neon Rainbow, and we'd like you to use neon -OR- a rainbow -OR- use rainbow colors. So many options! :)

I must admit, though, that the poor team over at SOS is at the mercy of my ear worms. Yep, I had that song stuck in my head one day, and it got added to the challenge list. Say what? You've not heard of this song? Are you a BABY?!  Here you go:

Ah, the Box Tops. Love those guys! And yes, back in the day guys wore suits when they performed live. Seriously. Who said we weren't civilized back in the 60s?

Now where was I? Oh, right, my card. I took the challenge literally and made a neon rainbow: 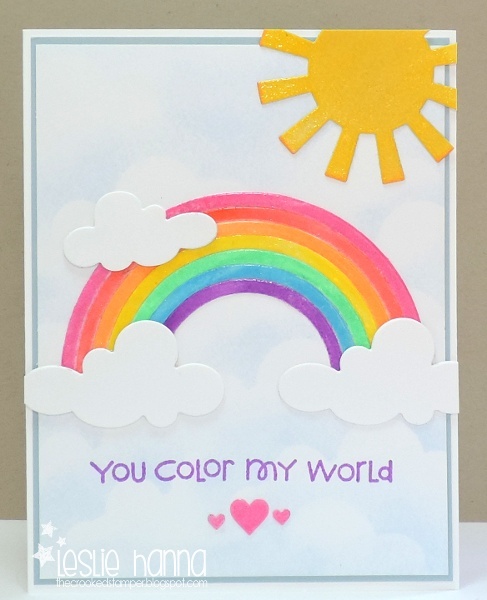 I have the whole collection of Tsukineko Radiant Neon pigment inks, so I used them. I have seven colors, and the rainbow die from MFT has seven arcs. It was meant to be.

I have yet to figure out a way to use this die and not end up pulling out my hair. It cuts the seven arcs, then you have to color them and put them back together. Each time I make a mess, and lose at least one of the arcs. This time was even worse, as I colored each one with pigment ink, then had to add clear embossing powder and set it aside while I did the others. Then I embossed them one at a time. Can you say tedious?

I put multi-medium behind each arc and stuck them down, starting with the outer arc and working my way in. Once I had them all stuck down, I went over them with my Versamarker and added another layer of clear embossing powder. The two larger clouds cover the ends of the rainbow so it wasn't just hanging there.

After I'd secured the rainbow, I sponged in some blue sky, then realized I'd schmeared some multi-medium in the upper right quadrant, and it wouldn't rub off, so it needed to be hidden. Enter: the sun! I cut it from a remnant of yellow card stock, but covered it with neon yellow pigment ink, and a little orange at the tips of the rays, and clear-embossed it so it would match the rainbow.

This was fast becoming a more-is-more card. To stop the madness, I focused on the sentiment, opting to stamp it in the neon purple pigment ink and clear emboss it, too. One can never have too much shiny.

Or maybe one can, because I then thought the sentiment needed to be anchored. I rubbed some pink neon pigment ink onto a remnant of white, clear embossed it, then die-cut some hearts and added them under the sentiment. THEN I was done.

With all that embossing, I only started one small fire, the results of which are cleverly hidden behind a small cloud. Crafting is HARD, people, HARD!

Wanna see some of the shiny? Here you go: 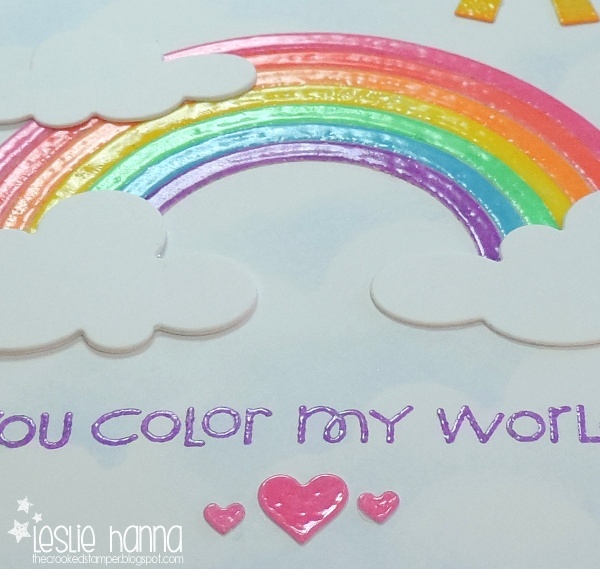 Oh, about those clouds. Why yes, they do look dimensional, because they ARE! I managed to cut one from a place on the card stock that had a spec on it, so I covered it up with another cloud. Then I managed to get purple ink on that cloud, so I had to add another one to cover it up. Then the other clouds looked sad, so I added layers to them, too. This, people, is how things quickly spiral out of control and a card takes on a life of its own.

So, that's my take on our Neon Rainbow theme. Why not stop over at Shopping Our Stash to see how the other gals have interpreted the challenge, and maybe you'll get some ideas and play along.

Stuff I used: Vat of clear embossing powder (seriously, I got a pint of the stuff a loooooong time ago from Viva Las Vegas Stamps), A Muse Studio cloud dies, and the following: