Back in the Groove

So when I got home from work this evening, I started stamping, of course! In a Good Demo moment had I ordered two of the Holiday Glitz kits so I could have my customers touch and feel them in early November. Naturally, I had to change up the suggested design, because I did not want to have to use staples. I thought I could create a really cute slit with the Slit Punch and just tuck the big flap into the little flap, but nooooo, our slit punches in the wrong direction for that. Next thing I knew I'd fired off an email to Demo Support asking them to consider making the slit punch the other way, and they asked for pictures. I'll do that later. 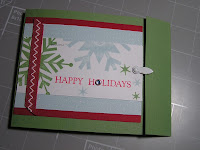 So instead of a cool slit-and-tuck, I opted for embossing some Hodgepodge Hardware with Winter White EP. It works fine until you pick up the card ... guess I did not get the brad tight enough. But they will get the idea, which is what this is all about, anyway.

I also put the card together sideways to get this look. And I stuck on the ribbon piece with some sticky strip. Not sure I'm lovin' the HPH, but it has promise. 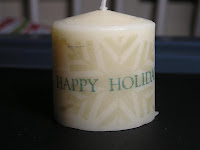 Since I am in Stamp Camp mode lately, I decided it was time to learn how to stamp on a candle. I carefully read the directions in the SCS tutorial and proceeded to not follow the directions. Well, I did mostly, but instead of the suggested outline stamp that can be colored, you can see I opted for a more solid stamp. Less work, what can I say? And this set was out, so it was a natural. 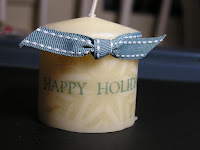 I did follow the rest of the directions, and it is so easy, I cannot believe it!
I took two photos, with and without the ribbon. This candle is really small, just to let me play without a huge expense. I think I may have to make some of these as gifts, or to sell at the few shows I am doing this Fall.
Off to clean some more. I need all my tables to hold the people who signed up for my Stamp Camp!
Posted by Leslie Hanna at 6:37 PM