We've had a bit of rain the past few days, and it turned into "severe weather" last night. Big wind, lots of driving rain. I'm sure there is a lake or maybe even an ocean somewhere well below normal levels based on the local flooding we're having today.

I happen to love sleeping during heavy rains. It makes me feel all cozy and warm and safe for some reason. Fortunately, Bobra isn't bothered by the thunder and lightning, and we just cuddle up and sleep. It's quite nice.

So imagine our collective dismay last night when an alarm went off. And it was LOUD! I don't have any alarms set, anywhere, so my brain thought: CO2 detector?!?! Smoke detector?!?! ACK! ACK!

Meanwhile, as the alarm sounded and made all sorts of crazy noise at 11:00 pm, I sat bolt upright in bed at the same time Bobra became airborne. He went from a cozy curled-up furball to an 11-pound furry airborne missile and he managed to get traction mid-air and somehow flee the room. Poor baby.

So what was it? STOOPID SEVERE WEATHER ALERT* on my cell phone! GAH! When did I sign up for those!? And dude, if it's 11:00 pm, and you're telling me there's a flood warning until 3:00 am and to avoid driving in standing water, you DO NOT NEED TO WAKE ME UP FOR THAT! Took me forever to calm down after I turned off the phone, and it took Bobra about 30 minutes to feel safe enough to re-enter the room.

But I could rest easy, finally, knowing that not only did I design Christmas cards this year, I made them, wrote them, addressed the envelopes, and sent them. I KNOW! *feels forehead*

Here is my card:

I wanted to jump on the snowflake bandwagon this year, but instead of buying new dies, I decided to use what I already had. My snowflake dies didn't work with this design, but I thought this Memory Box Seville Buckle die was a great stand-in! Yes, I know I didn't poke out all the little pieces, mostly because it sounded like work, but I also like to be different, and I think it looks fine.

I stamped the snowman from the Paper Smooches Swanky Snow Dudes set and fussy-cut them all, then I colored them with Copics. I die-cut some circles from some Basic Grey Christmas papers to put between the snow dudes and the silver.

I used Sookwang/Be Creative tape to stick the circles to the silver, and the silver to the card base. Those things aren't going anywhere, and now I need more tape.

Because I get bored easily, I also made a second card as backup, so I thought I'd show you that one, too: 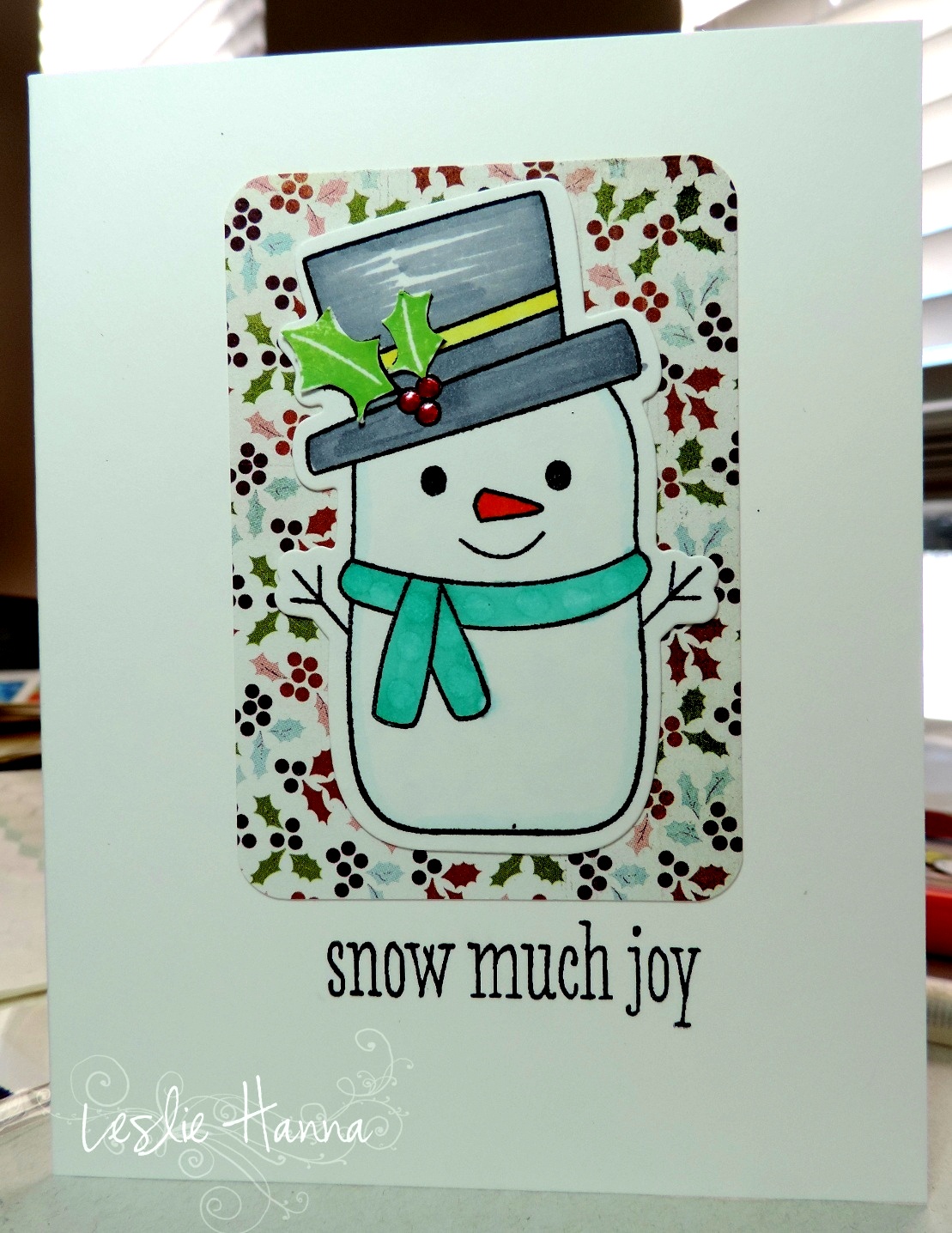 I wanted to use this stamp set and die because I was enabled to need it last year by the lovely and talented Shari Carroll when I took her Holiday Card Class at my then-local LSS. I've had them for a year, so it was time to use them.  I only made this one, but I did die-cut and stamp a bunch of the snowmen, so it might come back next year.

Okay, I'm off to get crafty again. Thanks for stopping by!

*Thank goodness I just found the Crackberry channel settings for those stoopid alerts. The only thing I can't disable is Presidential alerts. Say wha? Sigh.