I love long weekends, because after spending all day at the Saturday Farmers Market I still have 2 whole days left to catch up on life! I had A Plan this weekend to do several things, with stamping at the bottom of that list. Yes, the bottom. I am so behind on the rest of my life, I actually wanted to catch up a little bit.

First on my list was to go through my paperwork and start to file my FSA stuff for the first half of the year. Yes, I know it is September...I told you I was behind! Next on the list was to finish the online survey I am supposed to do for my Financial Planning service. They re-evaluate my finances for me every few years, but I have to give them the information. This requires me going through pay stubs, investment and IRA statements, bank statements, etc. I started this in...oh... April or May maybe? I am now getting not-so-subtle reminders that they cannot help me unless *I* do something first.

Next I am about 4 months behind in replacing my refrigerator water filter. Sears sends me nice cards reminding me of my model number and the replacement filter I need to purchase. Yeah, I know. But going to the Mall is just under Chinese Water Torture on my list of fun things to do, so I have not been yet. Last week I decided to order the durn thing online, and I have succeeded in moving the reminder card with the part number from room to room, and it now sits right next to the laptop on which I am keying all this balthering. Not ordered yet.

And the next Chunky Book project is due the 30th of this month. It is an alphabet theme, and I have the C, P and H pages. The H and P pages are designed and done, but the C page is not even fully designed yet, much less done. I really need to work on that... We've had all summer to work on it, but did I take the time to get ahead and not wait until the last minute? Nooooooo....

I DID finish designing all the cards for next weekend's workshops, though I have not uploaded them yet, nor have I cut the kits.

Then I needed to address all the veggies I bought at the Farmers Market on Saturday. And I wanted to make another batch of the yummy cheese crackers I made last week.

So, I started in on another phase of my Stash Dive self-challenge. I decided to use another whole piece of scrapbook paper from The Stash. I liked this piece of paper so much I apparently bought it several times, but I only planned to use one single 12x12 piece of it this weekend. That's all! 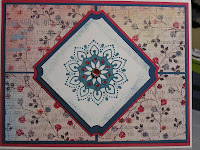 First up is another version of last week's SCS Sketch Challenge; I just used different paper and cardstock, but I did use the same image from the Stampin' Up! True Friend set. Isn't this paper yummy? Here I put it with Not Quite Navy, Ruby Red and Very Vanilla. Since I put a piece of SU bling in the center, I did not want to put brads on the corners of the center image, so I opted for the SU Ticket Corner punch instead. Naturally I had already stuck the layers together, so I had to un-stick them, punch them, then restick them. Yes, they are crooked, but they were straight before all that unsticking. Really! 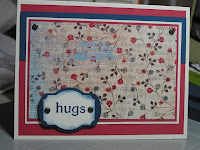 Next up, the same paper and card stock, but the layout is for Captain Crafter's Challenge #23. The sentiment is from a box of general sentiments I bought last year but amost never use. Perfect for this self-challenge!

Oh, and I made four more of these, partly to use up the paper, and also because I think they might sell. ;-) 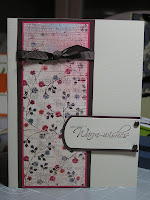 For this design I decided I was sick to death of Not Quite Navy and Ruby Red, so I switched to Chocolate Chip for the bottom layer. I also switched to Natural Ivory instead of Very Vanilla.

I used the SU Key Tag punch with a piece of 1" wide card stock, stuck the end of the card stock into the punch opening and just punched one end of it. Then I layered it on Chocolate Chip and hand trimmed around the edges. The sentiment is from SU's Hugs & Wishes set. I made two cards of this design. 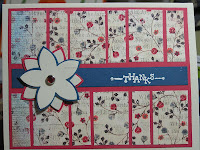 For this one I don't know WHAT I was thinking, but I started cutting. It began innocently with 1 1/2 inch squares, then when they did not fit the space right, I cut them into parts-is-parts. They still did not fit, so I put a blue strip in the middle.

I tried using the new SU Three for You punch, but I decided the paper had enough tiny flowers already, so I went with the bigger flower punch. I layered it on the Red and Blue (still sick of them, though) and added a piece of SU bling.

I stared at the blue strip for a while until I decided to use a small Thanks sentiment (Lockhart) with Vanilla Craft Ink and embossed it with Vanilla EP. Done! 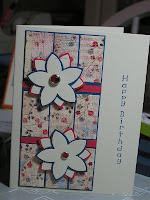 More of the pieces here, but layered on a piece of blue instead of red. I filled this space with red strips of card stock, and added more of the same flowers, and the Happy Birthday (Inky Antics) to finish it off. 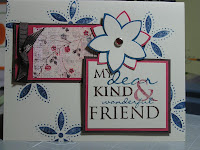 This last one was a real stretch, and I looked at the pieces for a long, long time. You can see the scrap of paper that was left is pretty small, but I had to use it ALL, so there I sat. And sat. And stared. I cannot tell you how many times I moved the parts around until I ended up with this layout. It's okay, but I am not crazy about it.

The sentiment is from SU's All Holidays set, and the flower stamped on the base card is from SU's In The Spotlight Hostess set. It also fits quite nicely in the flower punch (SU is really sneaky like that!), but it was a little too much, I think, and anyway the flowers were already cut and bradded together, and my chances of hitting it on center were slim and none, so I didn't. 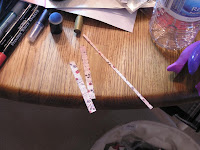 And now for the reveal! See those three little strips of paper? That is ALL that is left from the 12x12 sheet. Yippee!! Success!

Well, it did take me all day, but it's not like I sat at the table all day doing nothing else. I actually got some of the cooking out of the way. I made a double-batch of the Oat Cheese crackers (yummy!), a double-batch of Tomatillo Salsa (double yummy!), both of which used my food processor, so I was doing much washing between batches and recipes.

I also sliced and diced all my veggies and roasted them in the oven. I'll feed on that all week long.

FSA filing? Not done. Financial Planning data entry? Not done. Workshop kits? Not done. Online ordering the refrigerator filter? Not done. Chunky Book 'C' page? Still not designed. But I did use a whole 12x12 piece of paper, and it is gone from The Stash. Like I said the other day, though, at this rate it will be about 7 years until I make a significant dent. Ah, well, I am happy for the baby step I made today. ;-)
Posted by Leslie Hanna at 5:57 PM