More stash-diving, and a little domesticity...

Busy evening Saturday, busy day Sunday, and most productive! First - the domesticity...very unlike me, but it does come in spurts, so I go with it. First on my list was to take care of some of the veggies I purchased at the Market on Saturday. I made a vat of Ratatouille using a ton of veggies, including some peppers, and I am not talking green peppers. Well, they are green, but not sweet bell peppers. Farmer Mike and I have differing opinions of what constitutes 'a little heat' when it comes to peppers, and these are I think Poblanos. Anyway, into the pool they went.

While that was simmering, I started in on the pesto. Yes, I bought a ton of fresh basil so I had to use it, you see. The last time I caved and bought so much basil I ended up drying it. To make the pesto I need to use the Food processor. Now remember I have mentioned how teeny tiny this condo is. Once I go through the effort of retrieving the Food Processor from its storage spot, I must make the most of it being out and taking up counter space. It was still out from last week when I made the tomatillo salsa (also the result of purchases from the market), so I was fortunate. I whipped up a batch of pesto and selected a too-small container to put it in (I hate when that happens), which meant I needed to EAT some of it. So the pot came out to cook some pasta.

For dinner I had pasta, pesto, and some ratatouille. Yum!

This morning I picked up where I left off last night. I cooked down the extra tomatillo's I bought to thin out the salsa I made last week. Since it was made with Farmer Mike's poblano peppers and Farmer Gus's fresh garlic, it had a bit of a kick to it, and I thought it needed thinning. I processed them and added 'em to last week's salsa, put that back into the fridge and again washed the processor bowl.

Not to waste an opportunity to wash the processor bowl again, since it was out I decided to make a double-batch of oat crackers. I got the recipe from the Food Network, and added cheese to them to make them my own. They are yummy!

Once I was done washing what seemed like everything I own, I threw in a load of wash so I can go to work tomorrow, then did some belated snail-mail stuff. THEN, when that was all done, I celebrated by STAMPING! YAY! 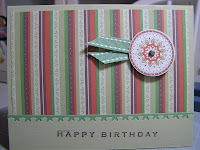 First up is the card I decided will be the birthday card I send to my customers for this and next month's birthdays. I had to open my Apple Cider DS paper from Stampin' Up!, and I love it! I do not know what took me so long. Oh, right, life got in the way...

The only stamping here is the sentiment from the SU It's Your Birthday set. I love the technique I found via this card in the SCS gallery about using the new SU corner rounder punch to make this cool border. I think I did mine upside down from hers, but I like it all the same! And the sentiment is crooked, of course.

With the birthday cards out of the way, I rummaged in my recent SU shipment of goods and found the So Many Sayings Hostess set I'd received and decided to finish mounting it. I had purchased the dominoes a few weeks back, and started the process, but got tired or something, who knows why I did not finish it, but today I DID! 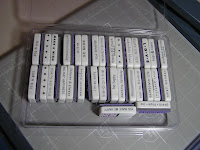 I had to move up to a larger storage box, which is why I think I stopped the mounting process before. Ah, it all comes back to me now. ;-)

I was still trying to save space, so I mounted one at the top of the domino, then the next one at the bottom of the next domino, so they could face each other in the box and 'nest', if you get my drift. I also double-mounted the rows of designs (X O X O... and hearts, for example) to save space and weight. These puppies are heavy!

Anyway, no, I have not used them yet, but they are mounted and ready for ink. Done! 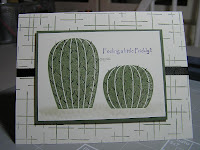 Next up, I have been selling a bunch of Get Well and Sympathy cards lately (not to the same people!), so I needed to replenish my inventory.

I got this Carved & Candlelit set with my last order's Hostess bennies. We all know I do not 'do' Halloween or Thanksgiving, at least in cards, so it would be perfectly natural to wonder why I chose this set. THIS is why! Not pumpkins - Cactus! Or is that Cacti? I saw this done on a card on SCS and I had to have the set to try it myself. I added the sentiment from Rosie's Roadshow and used the black marker to add the question mark and the spikes on the cactus. 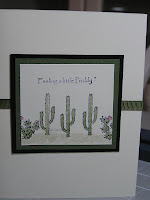 These cactus stamps were in my last Rosie's Roadshow order. I had this card in my head when I ordered them, so that justifies their purchase. At least it does in my head!

I stamped several of them, and they are even pretty straight! Whazzup with that? ;-) 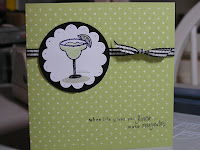 I also had this card in my head when I saw the stamps. Naturally I just 'picked them up' when I was in the LSS to pick up my order. I am weak.

The card is one of the new ones from A Muse, and it works really well with SU's Certainly Celery. At least that's what I used here. 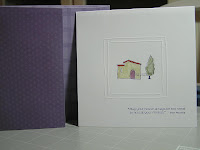 These next two qualify as Stash Dive entries, even though the stamps I used are new. As I was organizing a bit in the Craft Room, I discovered these sets of embossed note cards and envelopes from Lasting Impressions. 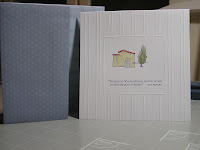 All the stamps are from Rosie's Roadshow. I have had a lot of people ask me for New Home cards lately, so I thought these might work for that category. If not, I like them anyway. ;-) And it uses up some of my stash! 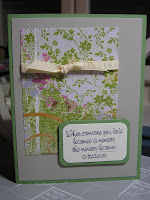 Sadly, people have also been looking for Sympathy cards, so I decided to add to that selection, too. This also qualifies as a Stash Dive entry since it uses a piece of paper from The Stash. It also uses a sentiment from Custer's Last Stamp that I bought months ago and have never used.

Enough creating for one night! I need to fold laundry and by then it will be time for bed. Gotta go to work to support my habit. ;-)
Posted by Leslie Hanna at 7:01 PM