In my continued quest to use up this stack o'card stock left from workshops past, I delved into the World of Purple. I actually had 3 cards in this one workshop that used purple - don't know what came over me that month ...

The mini-stack on the left actually became a magnet. Now you KNOW this is an old kit, because it has been a while since SU sold the magnet sheets. I am sure I have a cache of them hoarded somewhere ...ahem. The pieces are Whisper White, Mellow Moss and (I think) Perfect Plum. 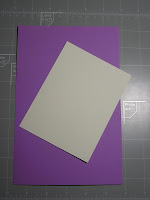 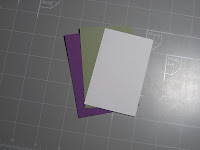 The stack o'stuff on the right is a simple base of Orchid Opulence and trimmed 1/4-sheet of Very Vanilla. This was really a blank slate, ya know? But then I had A Moment and hit on the idea to combine both stacks of card stock. I allowed myself to cut a piece of Very Vanilla to the size of the Whisper White piece (which I put back in the stack) and I came up with this: 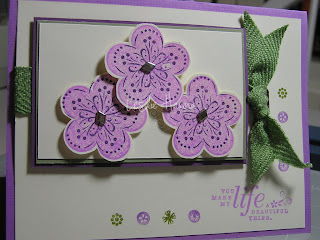 I thought it was boring until I added that piece of ribbon. In fact, I do not like naked vanilla card stock much, but I think anything stamped on it would make it too busy. So I am learning to love it.

I stamped the Canvas background in Orchid Opulence on the Orchid Opulence card base to give it a little oomph, but most of it is covered up by the Very Vanilla layer. On the right side (kinda hidden by the way I angled the card to cut the glare) I punched a slot with the Horizontal Slot punch and tied the ribbon through it so I would not cover up the nice (and you will notice straight) image I had stamped along the edge.

Now that I have broken out the Jersey ribbon, I have decided I really like the green! It is like a soft twill - thicker than grosgrain but very easy to use! Not too bulky at all! Hmmm ... methinks I see a possible workshop card for this month. ;-)

Off to create some more!