Caution: Stamping Can Be Hazardous To Your Health!

I once posted an alert that stamping can be fattening. That happened after a routine Doctor visit and the obligatory weigh-in. Ugh. Now I find out that it can also cause back problems. You see, my Day Job involves a lot of sitting, and this addicting hobby we call 'stamping' also involves a lot of sitting. Translation: I do a lot of looking down. I went to a specialist to talk about why my back hurts (nay, aches) to the point where my once-monthly massaaaages are now only two weeks apart, and sometimes I see her in-between those. There is something else going on here, I say; thus the Doctor visit.

His first question was What do you do all day? I sit at a computer.
And how do you spend your evenings? I sit at my craft table.
Do you exercise? And getting up to get more paper or different stamps, and pulling tape repeatedly out of the tape dispenser do not count. Uh, then No.
Do you read in bed? Uh, yeah, that's how I wind down so I can fall asleep.

I could see my reasons for living coming to a screeching halt...Further questioning revealed not only do I sit all day at work, the fact that by the end of the day I am slouched down in my chair is a really bad thing. I told him I do this because my upper back hurts, and that seems to relieve the ache. Unfortunately what it is doing is messing up my lower back. Here is what he told me to do:

1) At work, sit up straight, in a good chair, and do not slouch. If you ache, sit up straighter. I was really hoping he was going to tell me that sitting at a computer all day was killing me and I had to stop working. No such luck.

2) Stop stamping. AAAAAUGH! You might as well ask me to stop breathing! Seeing that I was not going to give in to his demands, he strongly suggested I at least look into a drafting table or something similar so I can work on an angle and not look down so much. I then asked him if Insurance will also cover the larger condo I'd need to HOLD this drafting table, to which he replied, "Yes, and the trip to Hawaii to help you relax, too!" I took that as a No.

3) It turns out reading in bed is only bad if you sit up and read (looking down.) Since I have a Tempur-Pedic pillow that supports my neck (and I have slept like a rock ever since I've had it - you should get one, too!), I lay flat on my back, with the cat sleeping on my chest, so I read flat on my back. The Doctor looked at me funny and asked if I hold the book over my head to read, and Yes, I do. The cat kinda makes that necessary, but at least I am not looking down, so I am okay. Until my arms get tired, that is, but I am usually nodding off by then, so it all works out just fine. I am officially allowed to keep reading at night. (yay!)

4) I get to go to four weeks of physical therapy to work on my lower back. We'll address my upper back later.

So today I spent the day stamping. I never listen, and I have my workshops next weekend, and no clue as to projects, so I had to do it, don't you see?! Fortunately I got all five projects designed, and I have until later this week before I need to start cleaning off the tables and cutting up card stock for the kits. Until then, I'll work my way through the heap(s) on my tables and keep making stuff for my Farmers Markets that are only a few short weeks away!

Here are a few of the cards I have on tap for next weekend. First up is a total case of a card by Kurtis Amundson a.k.a. Stampin Kub. I saw his card in this month's download of Sheet Load Of Cards and immediately knew I had to try it! 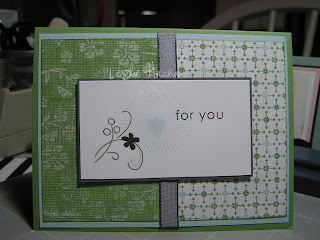 I did change it up a bit to make it my own. I used the same Afternoon Tea papers from Stampin' Up!, but I used Wild Wasabi and Basic Gray, where he used Artichoke and Black. I believe he used rub-ons from another company, but I wanted mine to be all SU, so I used some Sale-A-Bration rub-ons. Every time I earned a SAB set this season, I got the rub-ons. I have a LOT of rub-ons, and I like to share, so my customers will help me use them up. A lot of them got the rub-ons, too, so they will appreciate the opportunity to see one way to use them. The stamp is from SU's Bursting With Joy set, which I got because it goes with the Jersey Shore papers. Maybe some day I'll even use them together. Some day.

Most of the ladies who attend my classes have been stamping for somewhere around 15 years, so there is really not a whole lot I can make up that they have not seen before. But they are also good sports, and they've told me to bring it on, no matter what it is, and if they used to know the technique, they've probably forgotten they knew it, so it will be just fine to learn it again. Like I said - good sports! This makes it easier for me to plan projects, hoping to interest the newer stampers, but not bore the more-experienced ones.

So one of the recent Demo Challenges on SCS involved ... 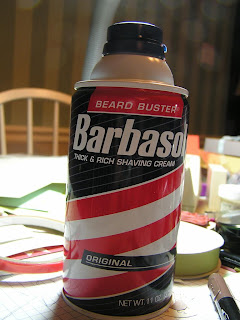 ... Yes, shaving cream. Do you know how difficult it is to find shaving cream? This was one of the things on my shopping list the other day when I successfully avoided the dreaded Dollar Spot, but there was none to be had. All they had was shaving gel, not shaving cream. Bah! I had to go to a big-chain grocery-type store, and they had two - just two - brands of shaving cream; the rest were all gels. But I did find it, so I decided to try the Shaving Cream Technique, and if it was not too much of a mess, I'd use it for next weekend's workshops. I started to play, and I have to say, I have no idea what took me so long! This was a lot of fun! And it smells good, too. 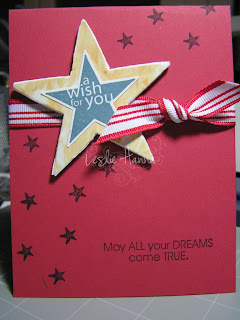 The chipboard star on this card is covered with a piece of Whisper White card stock that was colored using the above-mentioned Shaving Cream Technique using More Mustard and So Saffron reinkers. The stars and sentiment are from Stampin' Up!'s In The Stars set from the Occasions Mini catalog. At last, we can make non-feminine cards with something besides trucks, fish, tents or sporting equipment. 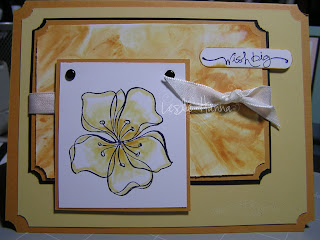 The cool thing about the Shaving Cream Technique is you get two colored pieces of card stock for your effort. This card is actually the reason I wanted to try it. I largely CASED this card on SCS, but even though I think I actually have the stamp used in the original, I needed to use a Stampin' Up! image for next weekend.
Please do not look too closely or you will see where I ripped the sentiment off the bottom right of the card. It made the card too bottom-heavy, so I re-stamped it and stuck it above, instead. 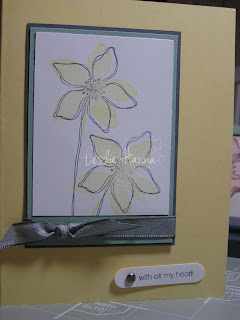 And last, but not least, is a card inspired by a house I pass going to work. It is an older colonial with pale yellow painted brick, a slate roof, white trim and green shutters. I saw Barely Banana, Basic Gray and Sage Shadow, and since I had just received my latest shipment of goodies from SU, I used the Wonderful You stamp set and Stems & Silhouettes wheel. It's been a while since we've done two-step stamping, and it's time. I used Versamark to wheel the background, but it is too light to photograph. Actually, it is too light to see with the naked eye! (Hmmm ... I wonder where that phrase came from - naked eye. As opposed to what? Wearing something?) I may give my customers the option of using Barely Banana, or maybe even a darker yellow so it shows up more. They love having options.
Oh, and I did take a break from stamping today - I bought a tent! Not only do I have Commercial Insurance, I have a tent!!! I had not yet acquired one after all these years of doing craft shows, largely because I have nowhere to store one. But the new EZ-Ups are shorter than the old ones. The tent is the same size, and weight - ugh, but it folds up much smaller. Smaller is better. I plan to store it in my car, of course, but it will take up much less space, and it will be centered in the vehicle so my back end does not drag. That would be awful ....
Posted by Leslie Hanna at 7:03 PM