The Great Moss Massacre of 2008

Welcome to the Chronicles of The Great Moss Massacre of 2008. First, allow me to show you what I believe to be the root cause of said massacre: 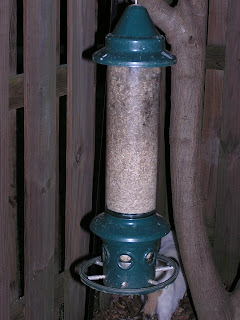 It is my pleasure to introduce: The Squirrel-proof Bird Feeder. Yes, folks, it works. I have seen squirrels hanging from the top of the feeder with their back feet in an attempt to reach the feeder openings, but the clever people who designed this baby made the body of the feeder just a bit longer than a squirrel's body, so they cannot reach the openings. HA!

The birds sit on the ring around the base of the feeder, and if they are not too heavy, they can feed out of the holes. If the birds are too heavy, or if say, a squirrel were to hang off the ring, the weight pulls down a metal bar that blocks the feeding holes. HA!

Note the cat behind the tree. This was moments prior to her escape. More on that later.

But those squirrels are not only mean, they are persistent. 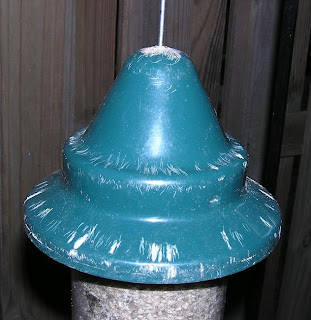 Here we have the top of the feeder. Allow me to point out that the white stuff is not bird poop. No, sir. Those are scratches made by mean, nasty squirrels! They literally try to chew their way into the thing. And they have tried more than one time, too. My last feeder was plastic, and when their weight pulled down the sleeve that blocked the feeding holes, they succeeded in chewing new holes. (I noticed them when I filled the feeder and the seed poured out the new holes.) Too bad for the squirrels this feeder has some metal parts. HA! 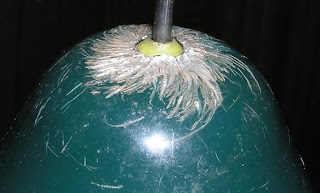 Here's an unbelievable close-up of the top of the feeder. I do believe that eventually they will manage to chew through the metal, but that does not mean they will get to the seed. HA! It just means they will wreck my feeder and I'll get to buy a new one. (drat!) Maybe next time I'll get the one with the motor that turns the ring at the bottom so they are flung across the yard. HA HA!!!

So now that we have established just why these squirrels are so pissed at me, let's examine what I woke up to this morning, shall we? 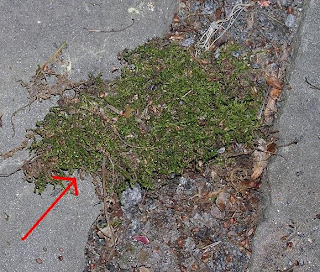 Exhibit A. Moss does not grow on the flagstone. Something (something) has yanked it out of the gravel and put it there. 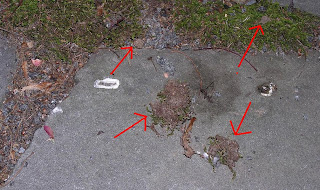 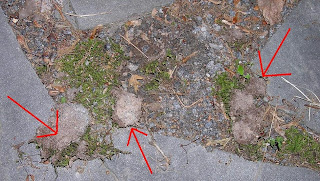 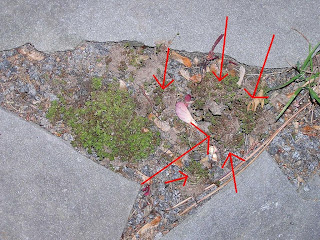 And Exhibit D. This one was just a mangled mess.

I carefully replaced all the parts-is-parts of moss and watered them to help alleviate their shock and pain. Then I brought out the secret weapon: 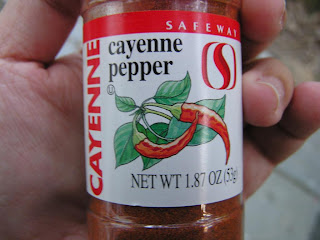 Cayenne Pepper. This was suggested by one of my two (maybe three) beloved readers. She said the squirrels hate to get cayenne on their little feet (so do I) and they will not be back. What do I have to lose? The moss will die at this rate anyway, so I seasoned them lightly with pepper.

I will report back if the massacre ceases and the moss is allowed to live without being dug up every other day.

On to the cat's escape. As I chronicled the Massacre, kitty managed to figure out a way to get out of the fence. I looked up and she was gone. GONE! Now that she has a chip, she no longer wears a collar, so I was just a wee bit worried. I opened the gate and began to scour the common area for a streak of white. I finally found her, all crouched down and ready to leap/pounce/run. She even had the nerve to hiss at me. Sheesh! As soon as I'd get close, she'd take off. Now normally when she escapes out the front door, she runs for the first blade of green grass and stops. She almost never really escapes and keeps going, so this was different for both of us. I followed her around the side of the building and back again. She finally went back into the open gate in our yard all by herself and headed straight for the screen door, still hissing. Even after she was inside she kept hissing. Even when I offered her wet food, she hissed. Personally, I think she was scared and really a little lost out there, and was just re-adjusting to being safe and warm and fed and loved. After a few bites of food she came out of the Kitchen and sat quitely, so she seems to be fine, now. Me, too.

Oh, and all of the above - the photos, the catching the cat, the feeding of said cat, and the slow-down of the ole heart beat occurred in the first 20 minutes of my arrival home. Sigh ...

As for stampin, I made these the other night while my StazOn was out, and I plan to color them between now and Saturday's Market. (Stamp by Stampendous.) 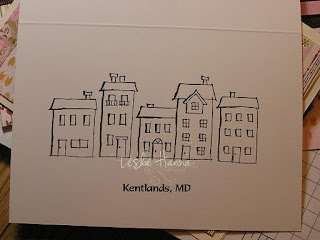 I sell these in packs of 5, and I stamped a pack of 20, so I'll end up with 4 packs of note cards to sell. The coloring will be a good, repetitive task to do after my massaaaaaage tomorrow evening. Or I could just take a hot bath instead. We'll see.