Tonight I begin with a card I received as opposed to a card I made myself. My Blogger and Twitter friend, Libby, sent me this card: 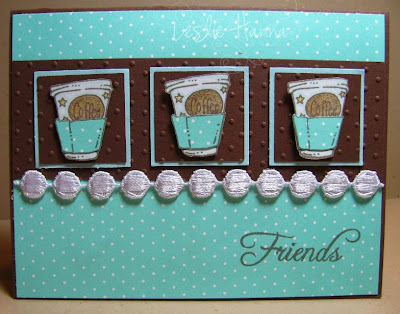 Isn't it super?! You know *I* didn't make it because all the pieces are straight. Sigh. This card was included with a stamp set I coveted, and now she expects me to actually make something with it. Ack, the pressure! :-)

But I did, miraculously, make a card myself this evening. It was inspired by the clothing worn by the woman ahead of me in line at the Post Office at lunch time. (That could be a record-breaking sentence as far as prepositional phrases go ...) She was wearing khaki slacks, a white T-shirt and a Crushed Curry sweater. Swap out "khaki" and replace it with "Kraft", and you have my color combo:

... which was just a starting point, as I failed to include any khaki in this card: 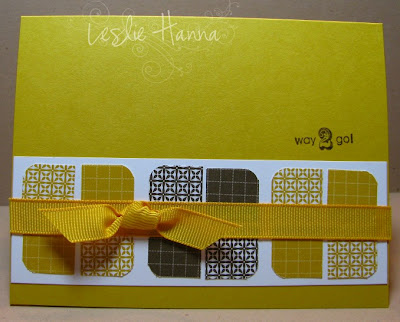 The idea for this design came from this card, and I wanted to CASE her idea, yet make it my own. I started with the In Color DSP and punched the 3/4" squares for the Curry. I thought it would disappear into the curry card base, so I added a layer of white. I also thought the Kraft would be B-O-R-I-N-G here, so I used Soft Suede instead.

Then I had a brain fart. I was looking at 12 tiny squares of paper that needed their corners rounded. I then realized the pieces were too tiny to fit into my corner rounder punch with any hope of the corners actually landing in the right spot to punch. Sigh. So in a Good Demo moment, I put some Dotto onto a strip of cardboard, one-at-a-time stuck each 3/4" square to it, inserted it into the corner rounder, and punched it. I did this 12 times. It was tedious. I only did one corner of each piece instead of two. I did not go back and read the original post about how she managed to round the corners until after I was done. (She used scalloped scissors, not a corner punch.) In the Twitterverse this is known as a #FAIL on my part of epic proportions. In my world it is just par for the course, though.

So I lined up the tiny squares as best I could and stuck them down. I hated intensely disliked it, plus it was, you know: crooked. In an effort to make this passable, I spied my scraps of Curry ribbon in my I-cannot-bear-to-throw-these-away-yet pile. I proceeded to stick one piece across the middle of the DSP squares and tied another piece into a knot.

The sentiment is from my newly-mounted Picture This set, which is a Hostess Set in the soon-to-expire Occasions Mini. Oh, look: I stamped it crooked. Oh, bother.

This card can be for any occasion - just swap out the sentiment! It's also a great way to use up scraps of paper! Not that *I* used scraps, but you totally could. I will not be using this as a workshop card, even though it ended up being 100% SU. Why? Because (1) we did the corner-rounding thing last month, and (2) I want The Ladies to come back, and this card might send a few of them over the edge. Nope, I still need two more cards for next weekend. Gah!

In other news, my Farmers Markets start tomorrow! YAY! Woo-hoo! And since it is May 1st - May Day, there is a parade in the neighborhood, and we have to get there really, really early, so I plan to go to bed really, really early tonight. Still left to do is dump out my "bag" from last Winter's holiday shows, triage the contents (things tend to collect in there so by December it feels like I am carrying bricks), and put back only what I need for this season. I also need to grab a few table cloths from my pile in the middle of the Living Room.

It is supposed to be GOR-JUS tomorrow, so I hope to get some decent pics to share with you. I might even sell something. Hey, it could happen!

Thanks for stopping by!
Posted by Leslie Hanna at 6:38 PM