Last night, during the Creative Avoidance phase of my Stamp Camp prep, I took out my Basic Grey Marrakesh Card Kit and got started. If you'll recall, I'm not big on card kits, mostly because I think when I use them I'm cheating on my stamps and card stock. It's easy to put together a card where everything is pre-cut and diagrammed for you; it's coming up with the idea that is most of the fun! But I had it in my stash, so instead of cutting card stock for my Stamp Camps, I made the Basic Grey cards.

Here's the first of three I finished: 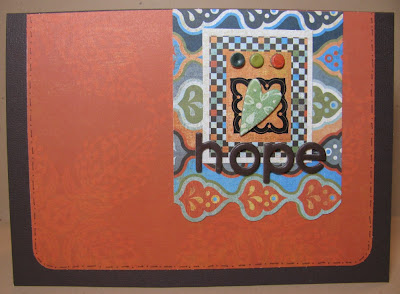 I followed the instructions and didn't change a thing on this one. 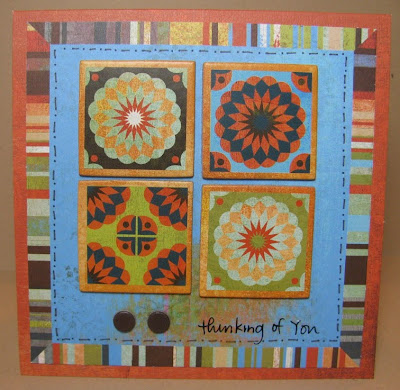 I went really crazy with this one and added the two brown chipboard circles to the left of the sentiment. They were the punch-outs from the 'o' and the 'p' from the first card, so, well, I used them on the second card. 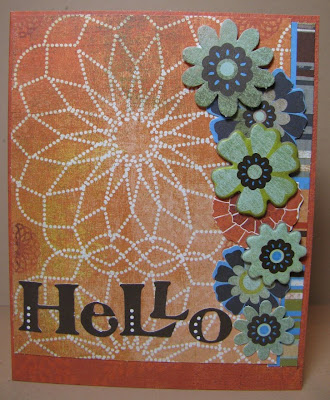 Oh, I broke ALL the rules with this one! The instructions said to put that striped piece of paper (on the right edge) on top of the paper flowers, but I went crazy and put the strip on the card first so the paper flowers are on top. See? Never let it be said that I don't have a wild streak. Seriously. I also chose not to center the patterned paper on the card base. I totally meant to do that.

There are 5 more cards I've started but set aside because I plan to change something on them ... I just don't know what yet.

Do you sense a lack of excitement with this kit? Mmm-hmmm. But it's 8 cards I'll have made for my markets that start in three weeks, so that's a good thing. Plus, now this kit is no longer part of my stash. Baby steps, people. Baby steps.

In other news, I have a pounding headache, which is either the result of too much wine last night, or the fact that our pollen count is running over 4000 again, or a combination of the two. Whatever. I know you feel sorry for me. Not having had a headache in over 8 years, I am particularly whiney about it tonight, so I'll take my leave and spare you.

Hopefully I'll have the rest of the Basic Grey Marrakesh cards done some time Tuesday, so I'll post them then.

Thanks for stopping by!
Posted by Leslie Hanna at 5:36 PM