Today has been weird. I only worked until noon, then I began my loooong weekend. Had the oven repaired "between 1 and 5", which turned out to be 4:00. Not bad. While I waited I opened the back door for kitty to sun herself. Just look at this: 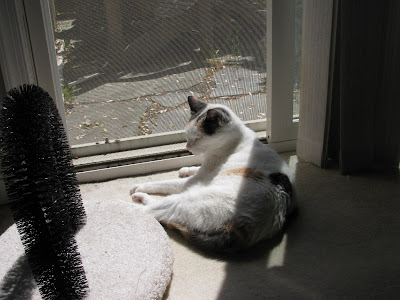 If this is not a perfect example of a lazy afternoon ... well, for her it was. Me? I was doing laundry and trying to keep Google Reader under 1000 unread posts. I just need to accept that 1000+ is the new 100. But still, I try.

I took kitty out back for a bit since I am filled with guilt about my upcoming road trip (more on that in a sec), so I indulged her. Gotta keep an eye on that one, though. She is, after all, a cat, and has escaped between the gaps in the fence in the past. While I had one eye on her, I spied this: 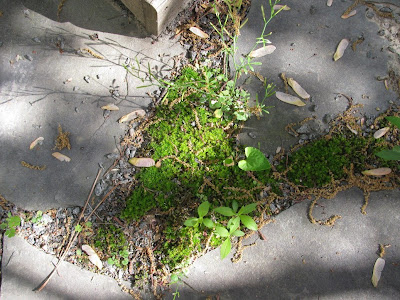 Moss! IT LIVES! (Hey, I pulled most of the weeds ... leave me alone.) Some of you may recall the Great Moss Massacre of 2008. If not, let me brief you. I had a flagstone patio put in several years ago, and I thought it would be cool to have moss growing between the stones. Enter BR #2 with bags of moss harvested from her own yard. We "planted" it and waited for it to grow. That's when the aforementioned massacre occurred. But the few pieces the birds didn't get keep coming back, and with all the rain we've had this Spring, the moss that's there is quite happy! I may try to plant some more this year. Maybe.

Moving on. I made two cards! YAY! Woo-hoo! (The crowd goes wild.) Ahem. It was one of my usual CASEs because the panic for my May classes is already setting in, plus my markets start May 1st, which is NEXT WEEKEND, and I am sooooo not ready. So when I saw this card, I knew what had to be done. Here is my version of her card: 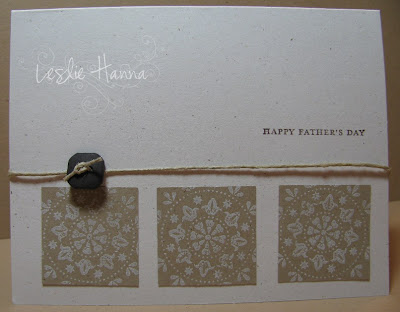 I stamped the medallion from SUs Wanted set thrice in white Craft ink on Kraft card stock and embossed it with clear EP. I used the 1 3/8" square punch to punch out the center. The card base is Naturals White, and look - I almost got them evenly spaced, too! I tied a piece of twine through an Earth Elements (or are they Neutrals?) button and stamped Happy Father's Day from Teeny Tiny Wishes in Choc Chip ink.

Then I made this version: 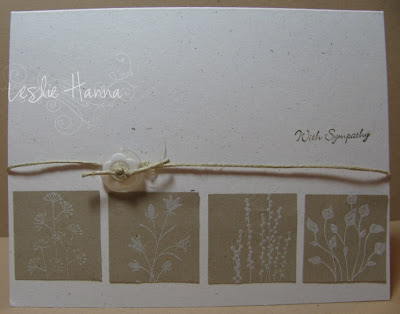 These images are from Pocket Silhouettes, and I used the 1 1/4" square punch for them. Yeah, they're a little crooked. Should I tell you I reattached those squares at least three times to get them that straight? True. That twine could use a little tightening, too. Oh, well. It's all about the idea, right?

So one of these might be a workshop project for May, which means I would only have two more to make up. Why the panic? Because I'm leaving for a short Road Trip tomorrow morning and I'll be far, far away from my crafty supplies. ACK! But I'll be doing fun stuff, and I shall report in, Internet connectivity permitting, with some pics of my adventures.

Meanwhile, don't break in and steal my stuff. I'm not worried, though. The cat sitter can take any of you with one hand tied behind her back. Seriously.

Thanks for stopping by!
Posted by Leslie Hanna at 8:34 PM