Man, where did the weekend go?! It's funny how time flies when you have things to do!

As I cleaned on Friday and Saturday in an attempt to find the tops of my tables and set up for my workshops, I decided to actually use the s-crap instead of just collecting it into a pile and moving it to a different surface for "temporary" storage (we all know how that goes ...). In the process I found a piece of this purple paper that I'd used a week or so ago, and it was the perfect size for two cards. 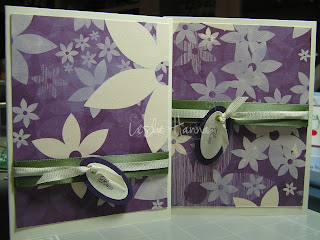 I also used (USED!) two (TWO!) of the new ribbons from my Outlet Field Trip. Amazing, but true! 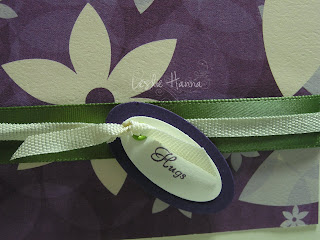 Here's a closeup of the tag and the two ribbons. Not too bad considering I threw both of these cards together in about 7 minutes. I was pretty proud of the fact that I thought to use a green ribbon on a purple card, but it needed something, and heaven knows I have a lot of green ribbon.

That piece of skinny twill is off one of the huge rolls I got that resembles a cable spool - the kind we used to make coffee tables out of in college - that will undoubtedly last me a lifetime, or two.

Then there was this one: 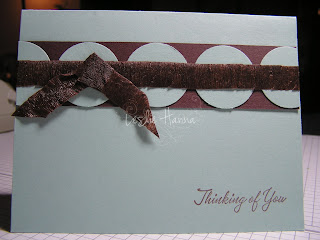 Heather had discovered a small spool of very cool ribbon in one of the bins, and it (the ribbon, not the bin) inspired me to make this, sans ribbon, since we only found one of the spools. In my memory of it (hey, it had been a whole 6 hours since I'd seen it, c'mon!) it was a very dark brown background with large mint or aqua circles on it. I thought I could re-create the look by putting circles on a strip of card stock the same width as the circles.

I used a piece of the Papertrey Aqua paper (that's one less piece I have to put away!) and a scrap of Chocolate Chip from which I managed to salvage a 5 1/2"-wide piece. After I made the row of circles, I sat there and looked at it as I usually do - stumped for what to do next. Since I was supposed to be cleaning, I could not leave it out to think about it, so I remembered a very weird roll of ribbon I'd picked up on our trek and I pulled it out. Turns out it was very narrow crepe paper, not ribbon at all. Oh, well, what the heck - I used it, and I think it looks fine! I slapped on a simple sentiment, and called it done. Boring, but done. 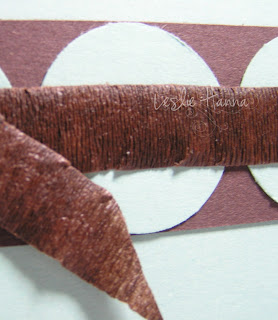 Here is a close-up of the crepe paper ribbon. You cannot really tie a bow with it (mine was just a half-tie), but it is definitely different. And I have a lot of it.....

Moving on to Saturday, the Yard Sale went well. I got the tent set up with a little help, then I helped several other people set up their tents - it was only fair! I think I discovered muscles I did not know I had, but it was good practice for when I need to set up my tent every Saturday starting in May. If only that bit of exercise counted for anything ...

It had dumped rain big-time Friday night, so we set up around the puddles in the parking lot. It threatened to rain most of the morning, but thankfully it held off and actually got sunny and hot by the afternoon. Results-wise, I took in about 2/3 of what I sold at last year's Yard Sale, and I only managed to move about one box of goods. However, I met four ladies along the way who expressed an interest in coming to my classes, so that was an unexpected bonus!

I also heard about a huge (huge) Scrapbook Yard Sale in two weeks in Virginia that I am trying to get into, though I fear with only two weeks to go, tables will no longer be available. Maybe I can register now for next year! :-)

After I got home, I was totally garaged and all I wanted to do was lay down and take a nap. But I still had tables to clean and kits to cut and prep and I think I had a sinus infection or a really good cold brewing and I felt feverish and ... and all I wanted to do was go to bed. But the prospect of getting up early to clean and set up was worse than having to finish, so I am happy to say I did get it all done last night and I slept very soundly and woke up feeling a little better, thank you very much.

Today's classes went well. I only heard, "Oh, I meant to do that" a few times, we salvaged all of the crises, and the shaving cream was a total hit. I love it when I can provide some entertainment at a stamping event. ;-)

But right now I wish I were a cat so I could do this: 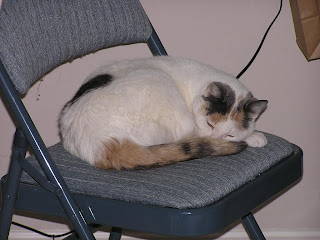 She usually assumes this position during the workshop, denying a stamper her seat at a station. At least this evening she waited until everyone was done before she took ownership of the chair. I promise you she will be there until bed time, at which time she will wake up to go to bed. Life's tough, isn't it?

Don't forget about my Blog Candy With A Catch! Check it out and play along! For those who have already responded, I will get your ribbon pieces out in the mail shortly.
Posted by Leslie Hanna at 5:55 PM