Part 36? I made that up. Pretty much everything I stamp is helping me to avoid something else I should be doing. It just goes without saying! I am surprised the cat has not run away from home, yet, though I do buy her food and treats, and keep her watered, and she has her sun beams, so I guess she can put up with me. It is probably a good thing I am single, though ...

Anyway, today I am supposed to be working on finding the Living Room floor, but, as I suspected, I got totally distracted by all the things I was touching. I have a policy to never put a stamp away before I use it at least once, which probably explains all the boxes and bags of things laying around here.

First up is my card inspired by the Berry-wearing market customer from yesterday. I took out my new Berry Sorbet card stock and the coordinating patterned paper from PapertreyInk and started to play. One thing I like about the PTI colors is the two pinks not only coordinate with each other, they also go with the other colors that have been released, which makes it very easy for people like me to know which green to use with that pink. 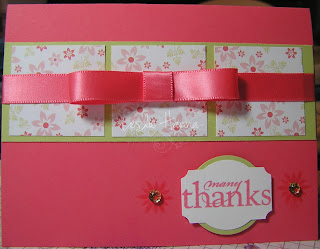 The first thing I did was cut a strip of the patterned paper and match it up with the green. That was boring, and such a Leslie thing to do, I felt I needed to alter it a bit, so I cut it into pieces to get the green to show around the patterned pieces. I went back and forth with the pink ribbons, trying to decide between the light and dark pinks. The light pink is a perfect match, of course (oh, how punny!) but I opted to use the darker pink for more contrast. I played around with the ribbon, trying for this look, and No, I have no idea how it is supposed to be done. I guess I'll read up on that before I try to show anyone else how to do it!

I pulled out my retired SU sentiment - one of the ones I will never, ever, sell - and stamped it in the Berry Sorbet ink. Oh, are you surprised I got the ink, too? I'm not. These are Palette inks, and I am starting to love them.

The coordinating flower stamp set is one I have not bought, so I used a small image from Baroque Motifs to stamp on either side of the sentiment. I also broke out my Dew Drops and tried to stick them down with green Stickles, to get the green to show through the clear dome. That sounds easy, but I struggled with it. The green dot of stickles sat nicely in the center of the flower, but as soon as I stuck on the dew drop it spread out to where you could almost not even see it. Maybe I need to let it dry a little bit before I stick on the embellishment. If anyone out there knows how to do this, please enlighten me!!!! 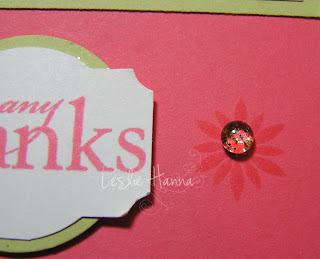 See - you can kindof see some of the green Stickles through the dew drop, but most of it squished out. ;-(


So then I moved on to this card: 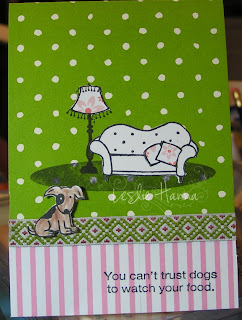 It was inspired by this post on SCS. I was very impressed with how she used so many images to create a scene, and I thought I'd give it a try. I also wanted to use the sentiment before I put it away. :-)

The dog started out on the couch, but it looked too busy in one spot, so I moved him. Now it looks like the furniture does not even belong there, but I was going for "the dog cannot be trusted", so if you are one of those people who never lets the dog on the furniture, he looks guilty on two counts. :-)

I am pretty proud of all the stash items I used here...A Muse card and striped pieces; neglected A Muse stamps; funky ribbon; and even scraps of the patterned paper from that first card, used for the lamp shade and pillows.

I must apologize for this next card. I have no idea where it came from, and it is not my intent to offend anyone. Okay, I do know where this card came from - from the stamp that I just had to buy because it called to me. It is one of the items from my recent Viva Las Vegas Stamps shopping spree, and I needed to use it before I could put it away. I may never use it again; it all depends on how many customers love it or leave me once they see it in the "A Little Out There" section of my boxes. 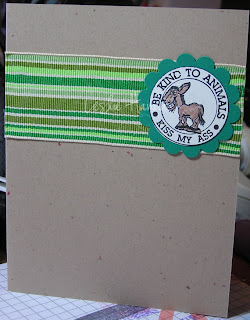 It also uses a piece of ribbon sent to me by a beloved reader who, for some reason, felt I did not have enough ribbon. I made three of these cards, which used all of this piece of ribbon. Can you say, "Gone."? One less thing to put away!


I now have a small stack of new cards for next week's market, and one load of laundry done. Not too bad. Let's see how long it takes me to actually put anything away today.