This weekend is not one I plan to re-live any time soon. Let's recap, shall we?

Saturday was a very long but rewarding day. Most of the day, the sky looked like this: 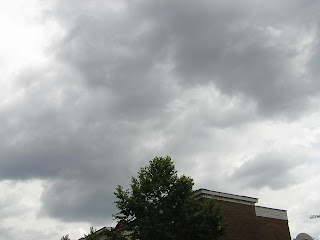 Then it would go back to a blue sky with fluffy white clouds and a blazing sun, then back to this again. The third time it looked like this greyness ... 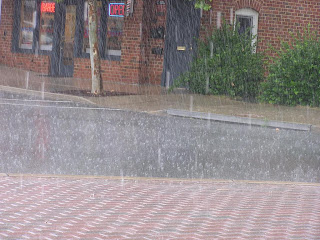 ... this happened. It was just a little rain. We were under a pavilion, so most of us were okay, but we did get rained on sideways. Then it stopped and the sun came out. Crazy, I tell you, just crazy! Unfortunately the humidity did not go away, so damp and hot, we packed up and left, and our Saturday market came to an end. All in all, it was a good day, though.

One aside for which I am giddy with glee... The corner at the pavilion is a three-way stop, and the word 'stop' is used here very loosely. The wacko drivers do provide us with limitless entertainment while playing Chicken in the intersection and arguing over who was less in the wrong, but we are just waiting for someone to actually die. We are sure it is only a matter of time.

So Saturday I spied a City policeman on a bicycle right outside the pavilion. Their squad cars have bike racks, and they often park their cars and bike through the neighborhood, chatting it up with residents. He was stopped and talking with someone, so I went up to him, waited my turn, and told him he could get a month's quota of traffic violations if he would only stand on this corner on a Saturday. So he did!!! And not 3 minutes later he pulled someone over. He pulled a LOT of people over and ticketed them for not stopping. He left for something else he had to do, but he came back and stopped even more people. Man, did we feel good about that!

Okay, back to business. Have you ever seen garlic plants? 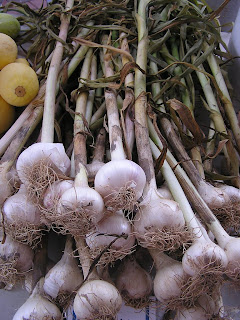 This is what garlic looks like when harvested. You probably only see the bulb parts in the stores. Sometimes you will see braids of garlic, where they braid all those tops. Those are very cool. 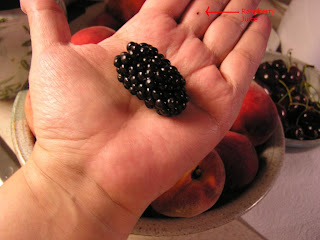 I also picked up some blackberries in addition to the cherries I got in my CSA. Check out this monster. I had a bunch of them in my basket.

And peaches, oh the peaches! Some of them got rained on, and the farmer was going to toss them since they were not going to last the night, so I took some home and made fruit smoothies for my dinner guests. They were yummy!

Speaking of dinner, I had to do this to have people over: 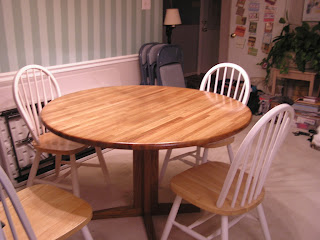 Look now, because I have not seen the naked top of this table in about 18 months, and it may not be seen again for another 18 months. I took the opportunity to oil the table (which is why it is so shiny), kindof to give it a drink after the long drought.

Dinner went well, and we sat around and ate too much, as we always do. I used paper plates and plastic cups, so cleanup was a breeze. ;-)

Sunday morning I packed up and went to my Sunday Farmers Market, and most of the day the skies looked like this: 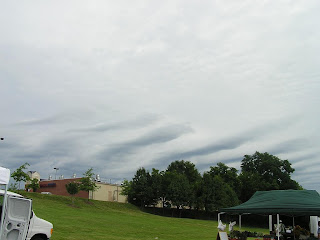 Look familiar? And it was stinkin' hot and humid, too. The market was slow, but my special order was picked up, and by the end of the day it turned out to be a pretty good day sales-wise. I cannot remember being so dripping hot, though.

Oh, and the BBQ guy was there! And he got a standing ovation when he showed up - it was pretty funny! Since we also had an Italian Ice vendor (OMG, it was good!) and I'd just finished a very large serving of Strawberry-Lemon Ice, I was too full and too hot to contemplate eating hot BBQ, but it sure smelled amazing. I will definitely save room for some next time.

When I got home Sunday, I showered to wash off the hot, then laid down on the couch to rest my eyes. Two hours later, I woke up and decided I'd seen enough of the table top, so within 10 minutes it was covered again, and I made this: 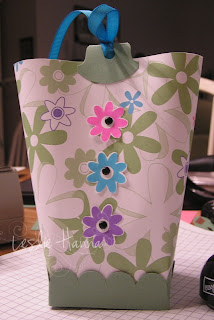 I first saw these on SCS, and I Favorited this one. The tutorial for these can be found on Diana Gibb's blog here. The directions are very easy to follow and they are really cute. I think I grabbed a too-busy piece of DS paper, but I think I may offer this up as one of my five projects for my July classes.

In real life, the Wild Wasabi card stock really does match the DS papers....just remember who took the picture.

As if this was not enough excitement for one weekend, I got my new SU Decor Elements order today. Woo-hoo! I got the Flourish Frame, the lower-case Alphabet and an extra E and C. I'd planned to put up the frame and then spell out 'Create' inside of it. Having today off, I decided to put the items up where I'd planned, but, well, let's just say apparently I cannot handle anything larger than my head.

I started with the frame. All went well until I realized there were actually three parts to it, and I wanted the middle part of the frame. After much wrestling with the bugger, I got it off the backing as instructed, and then I promptly forgot the rest of the instructions that said to be careful not to let the rub-on fold over onto itself. I was left with this sticky mess: 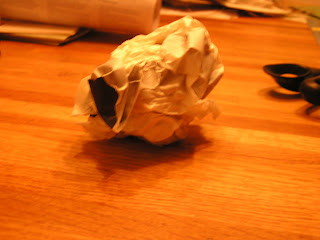 Okay, the wrinkled-up part was my frustration, but inside this wad of paper is a much-stuck-together former Flourish Frame. So sad.

Then I proceeded to Plan B, which was to just put up the word by itself. That came out pretty well, I think.

It is almost straight, too. I drew a pencil line with a ruler and a level, and the line was straight. Except for the cockeyed capital 'C', the rest of it came out okay.

One of the reasons I got the whole lower-case alphabet instead of just the individual letters I needed is I did the math, and even though it worked out to be a little more money, I got all those extra letters to use somewhere else, so I could do this: 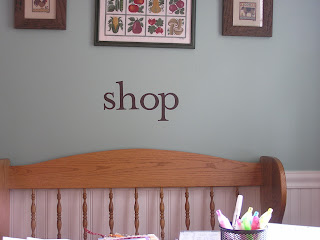 This is where my customers sit when they place their orders. A little gauche, I know, but it will drive home the point that these can be used almost anywhere.

THEN, I remembered I also got the white Baroque emblems, so I did this: 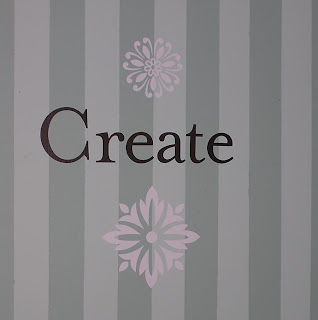 I originally wanted to use them on the Bathroom mirror, but they are larger than I thought they'd be (I totally ignored the measurements given in the brochure ...) so I opted for this larger wall instead.

The rest of today will be a lazy day. Maybe a little laundry, some feeding, and definitely some creating. Actually, my little Brother turns 50 in August, and I am planning his very special gift. Guess I should get started on that, too.