Crook. That's me. It is short for "Crooked" and way easier to type. What part of "lazy" have you not figured out yet? :-)

Today my plans were simple: Stamp, go to Baltimore, stamp, stamp, do some laundry, and stamp. I actually accomplished most of that, but since my camera battery is dying, I'll mostly talk about the "go to Baltimore" part. It was on the way TO Baltimore that my camera battery was abused when I accidentally turned it on as I tossed it into my purse. (This is one reason why I do not carry a purse...) It was on for an hour before I noticed when I grabbed it to take a photo. Grrrrr.

So why did I go to Baltimore, a city I generally go around? One of my Tweeple, @Patriciamonkey (HA! I spelled that 'minkey' and thought of Peter Sellers in the Pink Panther, but I digress), is in town to see family AND to participate in an art show at the American Visionary Art Museum, so I had to go meet her. I had never been to that museum before, and it is a little quirky. Interesting, but not like going to the Guggenheim or the MOMA.

I parked down the street, and this is the side of the building I approached, which turned out to be where the art show was happenin': 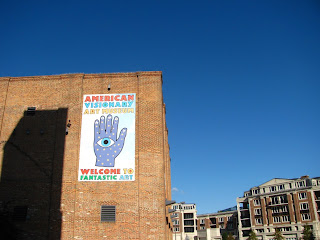 And yes, the sky was that blue today. This is right across from the harbor - those condos on the right are ON the water. Very pretty.

The actual museum is huge, but I never saw it. Here is what I missed: http://en.wikipedia.org/wiki/American_Visionary_Art_Museum.

I got my first glimpse of what was to come when I happened upon this creation near the door: 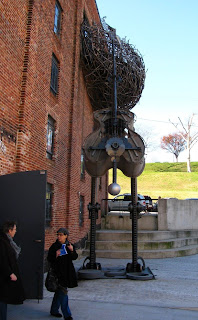 Those unsuspecting people I caught on digits (not film any more) give you a perspective for the size of the thing.

And this was a few feet away: 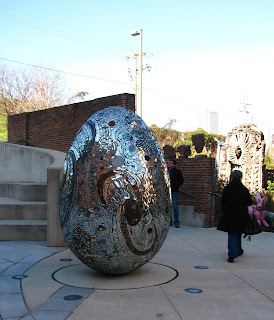 Here is a glimpse of Patti's work: 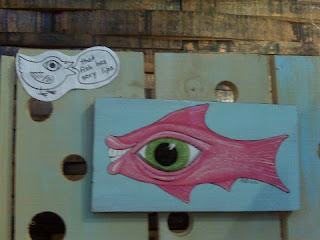 She had those little bird signs all over the place! Very cute!

Here is one of her ornaments: 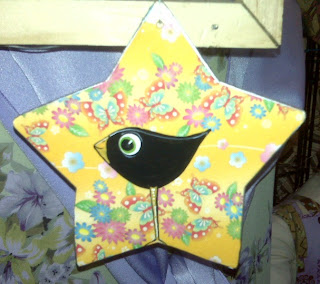 I came very close to buying several of them, and I do not even celebrate Christmas! They would have been gifts for others, but I resisted the urge. Instead, I bought stuff for MYSELF. I'll take some photos once I replace my camera's batteries. (These were taken with my phone.)

So check out her blog and her etsy shop. If she has anything left after today's show (and since sales were non-stop while I was there, I suspect she has very little left!) she will probably add it to her etsy store for Cyber Monday.

The best comment of the day... as I was walking around, trying to stay out of the way of all of Patti's customers, I found the booth two stops down was a jeweler that was also at my Farmers Market on occasion. She, too, was swamped, but I spoke with her DH, and he said the show was "trippy". Yep! That about sums it up! Some pretty nice stuff, excellent for gifts, especially for the person who has everything!

As I tore myself away and left the building, I saw more art. This is what I call the "spitting fountain". You've seen those fountains where the little kids are, um, er, peeing? Not here! This is a family show! These people are spitting! HA, not really. But spewing water from one's mouth is prefered, if you ask me. 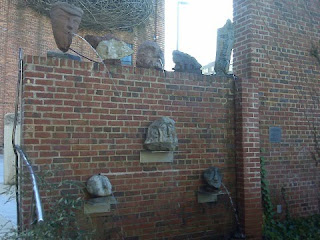 And I looked up to see this - sky art! (And a glimpse of the building I never really saw.) 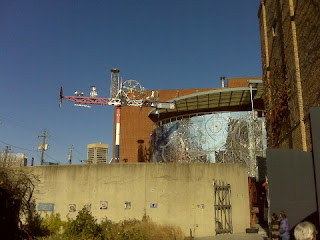 Here, let me zoom in a little closer: 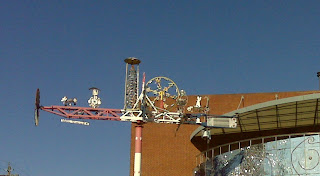 It was moving! Okay, the parts were moving.

And to show you I have actually STAMPED something in the past three days, here is one of my Festivus cards: 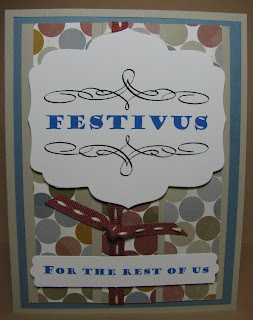 It had to be made, and if you recognize the paper, it is some scraps of retired DSP. Yes, I am working The Heap again. The swirly things above and below "Festivus" are another digital SU image from the set I got. I opted to not maintain the ratio and just stretched it to make it long enough for the word. Easy, peasy.

I did manage to make a few Birthday cards today, and I'll show you those plus anything else I manage to generate after I dig out some new batteries.

PS: Don't forget to check out the Mimosa Club Cyber Monday dealio! Check out my etsy store for the details!
Posted by Leslie Hanna at 8:08 PM