I might be done with this 6x6 paper pack. Well, as done as I'm going to get. For those of you who wonder how I got so many cards out of one 6x6 pack, the Basic Grey packs have 36 sheets of 1-sided papers, where other companies' packs have 24 sheets, mostly 2-sided, so I had a lot more physical sheets of paper than the tutorial I linked to the other day.

Although, she made it look so much easier. Yesterday was fun - using the bigger pieces gave me a ton of options. Today, however, working on the scraps? I think it was just as much work to make today's 13 cards as yesterday's 46! But I digress.

Grab a cuppa your favorite beverage and sit a spell. This is another long one. 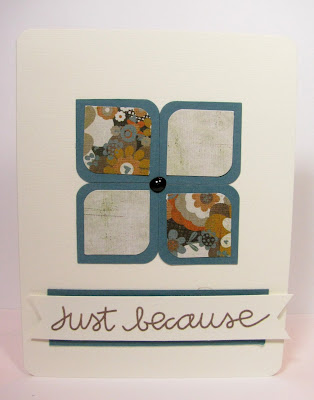 This started with a few small pieces of that patterned paper. I punched 1" squares out if it, and also the solid white sheet from the pack, and punched 1 1/4" squares out of Buckeroo Blue scraps, rounded corners, layered, rounded some more, and put two of each on the card. I was CASEing the 3rd card in this OWH post.

But since I chose not to layer, I ran into trouble with the center embellishment. So I had a hair-brained idea to make my own colored Glossy Accents, which I did with some Really Rust reinker. I made four of these cards, and I applied the goop before I did the sentiments, and they took over my desk while drying. I was doomed.

I eventually made the sentiment strips in spite of the cramped conditions, then moved the cards to another area so my whole day wasn't lost. What was I thinking?!

Next, I futzed with papers and made two of these: 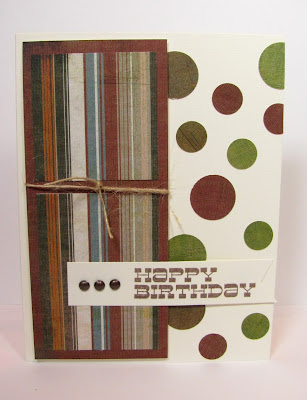 Oh, look, the twine is wonky. I'll fix it. So I had those pieces of striped paper, and in a moment of clarity, I chose to layer it on some of the red piece so I could use it up. Twine - done. Except the right side of the card was boring, so I attempted to bring it to life by punching out 1/2" and 3/4" circles from scraps of three of the solid colors. I did use up the scraps, but I think this card falls into the "seemed like a good idea at the time" category.

I am, however, quite pleased that I thought to add the brads before I stuck the piece down to the card base. Actually, thinking back now, the brads were Plan B. You see, I tried to attach a jumbo eyelet, but the Crop-O-Dile didn't reach far enough, and I was NOT going to get out my hammer, so brads it was. I like them!

Next up, I tackled the pile of 1/2" strips of paper. They didn't go well together side-by-side on a card front, so I took the difficult path and chose to make a Bargello pattern with them. Wait, is Bargello a pattern or a technique? Whatever, if you don't know what Bargello is, watch this.

Here's mine ... first I stuck all of those strips to a piece of printer paper: 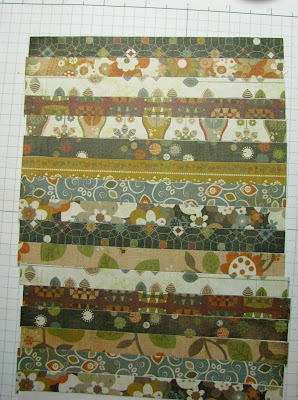 then I trimmed it up and cut it into strips: 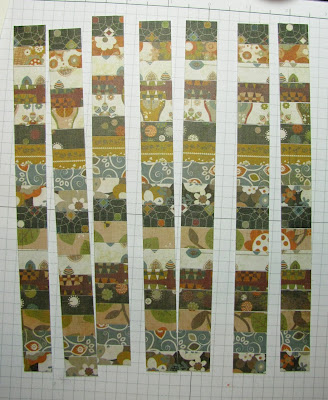 Next I took another piece of printer paper and started laying down the strips in a staggered pattern: 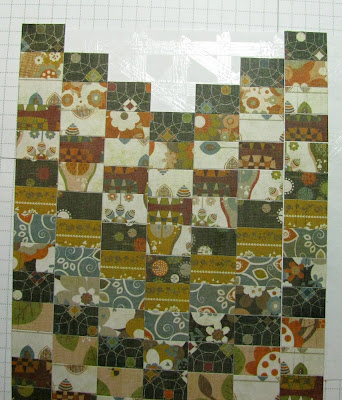 I trimmed the excess off the bottom: 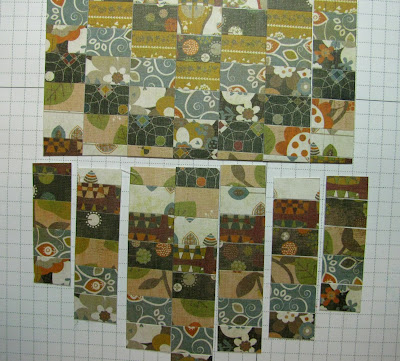 then attached the strips to the staggered top to complete the pattern: 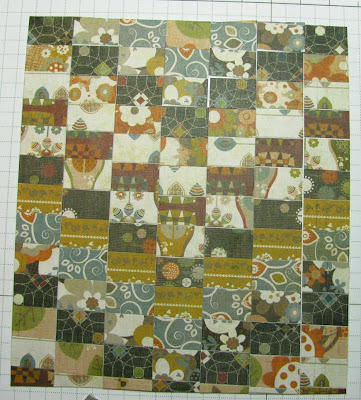 I was left with a few strips and I must confess, I saved them: 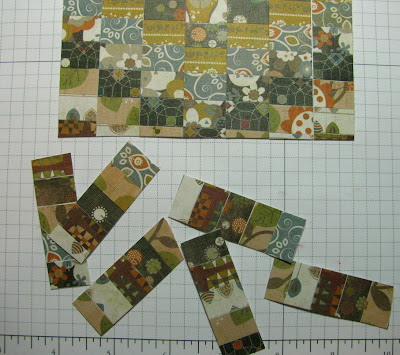 I did. And just now I figured out how to use them, so there will be one more card. :)

I took the finished grid and cut a Top Note die out of it, then cut that in half, and made these: 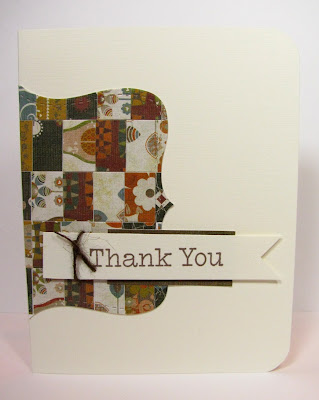 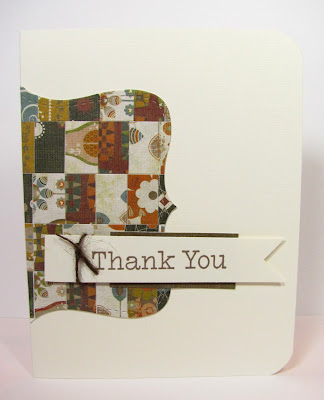 Next up, I made this: 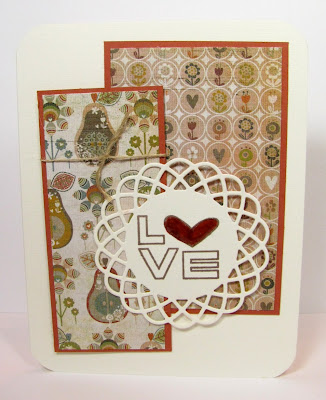 Yeah, two random pieces of paper that got layered on Really Rust and used together. I added Glossy Accents to the heart. I had a lot of drying time today, it seems.

Here's one I made by accident. Yep.I was going to punch more squares out of this paper and make the rounded corner thingies like on my first card today, but then I realized it would be less work to just use the whole piece and be done with it. Lookie: 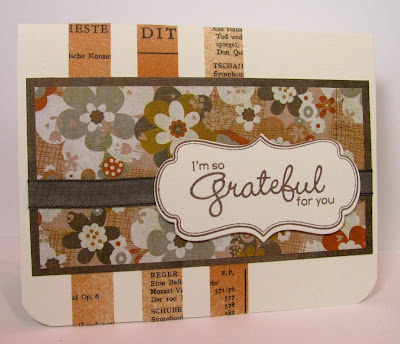 I even snuck in some washi tape. :) I made two of these.

Then I realized I still had some solid papers left over, and also two angled pieces, so I called the angled pieces a "hill" and made these: 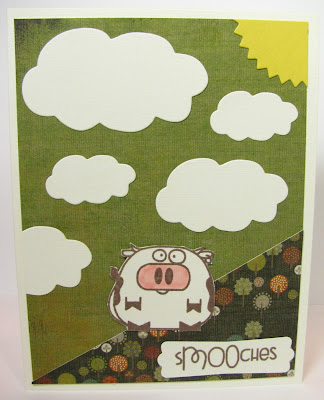 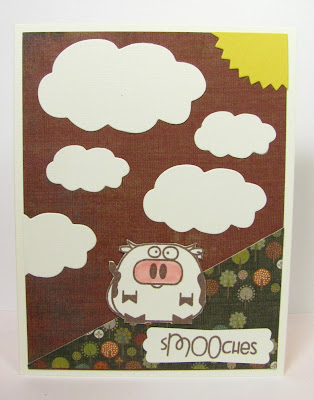 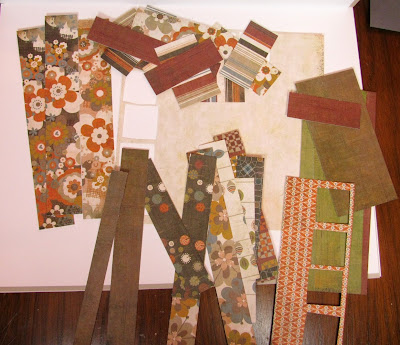 It still looks like a lot, doesn't it. Well, after I make the card with the Bargello remnants, I'll see what I can squeeze out of this stuff, but I say I'm pretty much done.

In other news, I now know why I gave up mass-production, and why my massage therapist is glad I did. Owmyback! I shall be taking a hot soaking bath tonight before bed. But I am so happy I got all these done! I'll ship them out next week with my holiday cards.

Tomorrow is a holiday here, and I plan to tackle a few challenges I've been collecting on my stamping breaks. Stay tuned! I'll be back!