Yesterday I took three (THREE) classes from Michelle Zindorf, the Queen of the brayer. This is the last year she is taking her show on the road, and when I saw she'd be in VA, I signed up for all three classes.

I have to tell you, three 3-hour classes in one day is A LOT! By the beginning of the third class, those of us who had been there since 9 am were definitely punchy, perhaps bordering on unruly, though that might have applied to mostly me. There's one in every class, right?

The first class was the Beginner one, and we made three cards. Here's the first one: 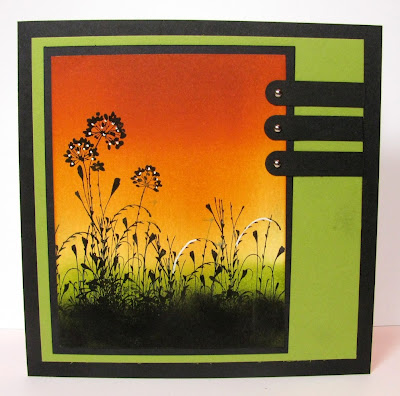 Nice, huh? Out of the gate, we squealed a little. And I added the obligatory inky smudge on the right side of the card. 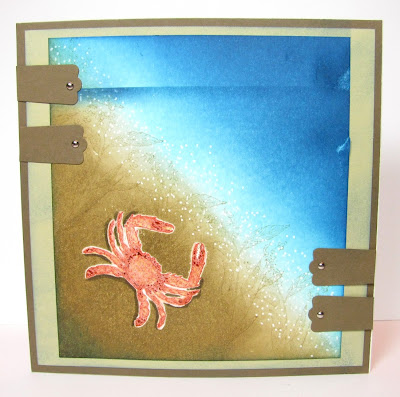 For this one, I attached the tabs wrong and when I moved them, they tore the ocean and sky. I TORE THE OCEAN AND SKY! Then I tried to save it by sponging it, but since it was already attached to the tan layer, I messed that up, so I sponged the whole tan layer so it looked like I meant to do that. Sigh.

And the third card from the beginner class:

After a lunch break, we had the Advanced class. Here's the first card from that session: 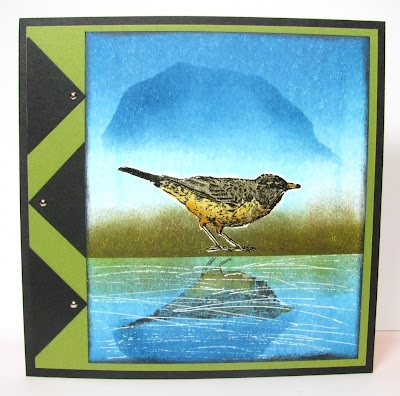 This was so fun to make. Also, that dark thing in the sky is supposed to be a mountain. Several of us had mountain challenges. Post-it notes were not our friends.

Here's one of the two other cards we made in the Advanced class: 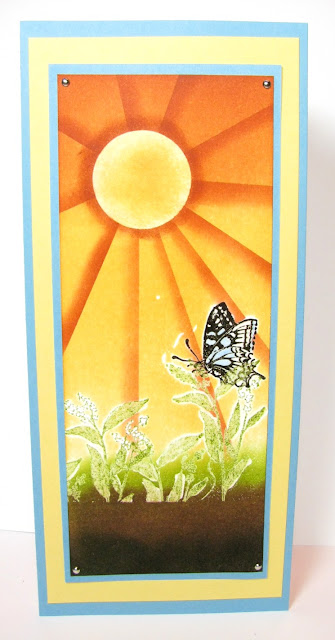 I love this one. So easy to do! Please ignore the stray embossed white flecks. Sigh.

And the third one:

This picture is wonkier than usual because the card won't stand up, much like me, today. I am leaning a lot, too. The tree is really a branch from the SU Serene Silhouettes set, and we drew in the trunk. Mine is crooked, of course.

Then I had 3 cookies for dinner, and that might explain some of the raucousness in the third session, which was Direct To Paper. Here is the first project we made: 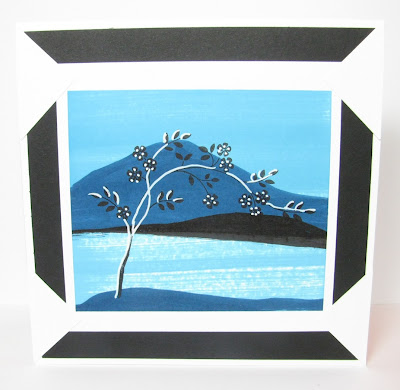 This is the point where I realized I am White-Gel-Pen-Challenged, but Michelle said it looked fine. I think her blood sugar was low, too.

This next one had most of us squee-ing at first, but the execution was ... not so much: 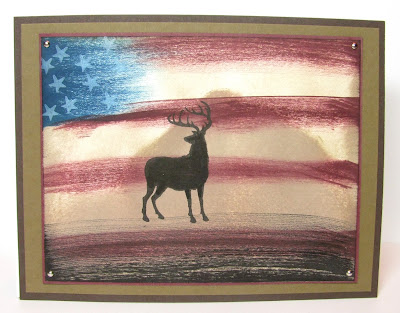 Again with the mountain challenges. Stoopid Post-it Notes. Also, it was supposed to have five burgundy stripes, and even though we got two tries at each of these direct-to-paper cards, I only managed four stripes on each one. I think we all agreed the stars were our favorite part of this card. Well, we liked Michelle's card, but not our own attempts.

And the last one: 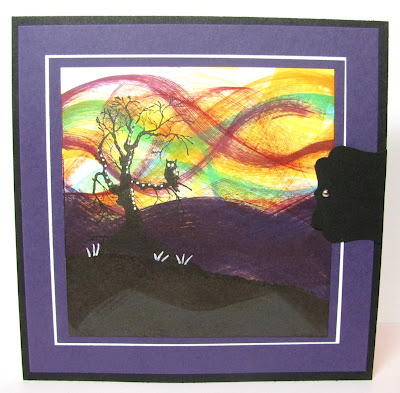 This card taught me a lot. The first thing I learned is free-form is not my strong suit. We were supposed to make random lines, and mine all lined up, or waved in the same direction. Michelle was shaking her head at me by this time, and I think she was actually laughing at me instead of with me. (No, not really, she is too NICE to do that. :))

That's it. All said, it was a fantastic day, and I'm glad I had the opportunity to attend all three classes. I might have Brayerer's Wrist this morning, though. Will I ever use any of these techniques again? Probably. And as Michelle said, now, when we read the tutorials on her blog, they will make much more sense, and they will!

She also told us that while she won't be doing road trips after this year, she will still be blogging, probably more, and hopes to start doing videos. Now EVERYONE will be able to enjoy the lovely Michelle!

I ended my day with a trip over the Potomac by ferry, which I've never done at night before that I can recall. It was so beautiful.

Today, I think I'll take a hot bath to un-kink my back, then get stampy.

Thanks for stopping by!
Posted by Leslie Hanna at 10:10 AM