I called this post Surprise Bird, because this is NOT the bird die I'd been seeking. (Let's keep this G, people!) In fact, I'd forgotten I even had it. Must have acquired it during one of my Teaser Tuesday Sizzix episodes. But I digress. Let's start at the beginning.

I seem to be incapable of putting things away, and it forces me to create heaps of paper remnants. For this past weekend's show, I'd used a piece from my untouched stash to make some signage: 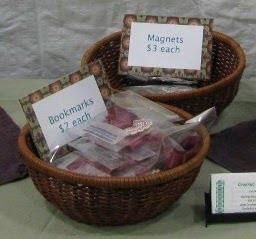 and I had a small piece on top of the heap which caught my attention this morning. I put it with a piece of black, then left for work. Upon my return this evening, it was waiting for me to continue, so I made it into this: 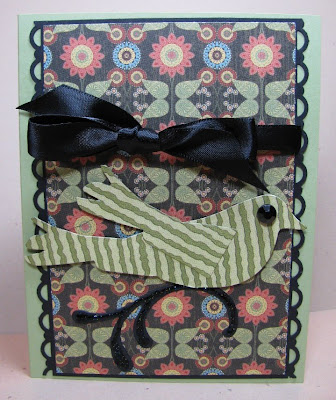 That bird is NOT the one I expected to find, but I decided it needed some love, so I used it. The bird paper is the reverse of the main piece. Why, yes, I had more. What, you were surprised?

But the bird die had no wing, so I cut another part of the bird to use as the wing. It's kind of difficult to tell because of the glaringly poor photography, but the card base is SU's Pear Pizzazz, and it's almost a perfect match for the green in the paper. I added some glitz with a miscellaneous faux gem for the bird's eye and some black Stickles on the swirly thing. DONE!

That's it. That's all I've managed to accomplish this evening. Wow, at this rate I'll have made 5 cards by the weekend. Not sure I can handle that pace.

Thanks for stopping by!
Posted by Leslie Hanna at 9:36 PM