Last night I moved on from all that pink and attempted some more generic, and maybe even boy-type cards. Best I could do in this pass, though, was in the colors. I chose a few papers from the Basic Grey Cupcake 6x6 pack and made the following. 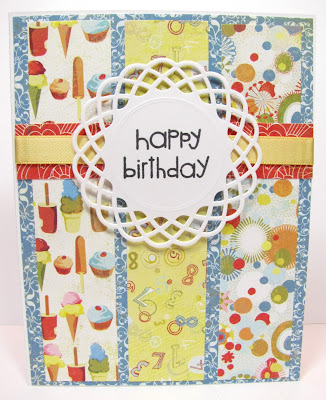 Yes, again with the doily tags, but since I made five of these with various background colors, I now have only seven MS doily tags left. It's only taken me three years to use them too.

The second batch of cards used color blocks, like this: 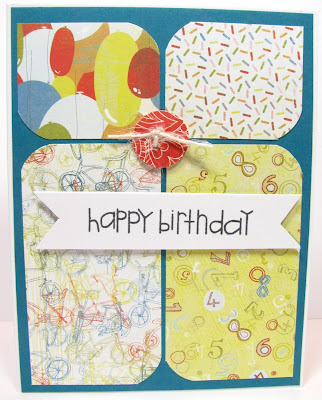 You may not be aware of this phenomenon, but we bloggers tend to feed off of each other craft-wise. One person says something, then someone else follows up on the idea, then someone else sees it, and then the original person sees THAT and it all comes back around.

I'm blathering about my stumbling upon the fabby tutorial on OWH that shows how someone used up a 6x6 paper pad to make cards for OWH. I snagged the idea and spent Labor Day weekend doing the same thing, the results of which you can see here, here and here. Then one of MY crafty peeps, Melissa, was inspired to do the 6x6 thing and she did - right here.  And yes, she blamed me. I'm so proud.

Her comments about one of the cards she made (card #20 in her post) cracked me up, and yesterday I decided to tackle the concept myself to see if I could handle it. She used four pieces of patterned paper and tried to line them up straight. HA, well, I know me better than that, so I did a variation of her idea and left a border around the edge of the layer, thinking it would be easier. Nope, I have mostly crooked borders, too. WHY WHY WHY do we do these things to ourselves?

I cut the papers into 1 7/8" strips, marked where I wanted to cut the first piece, cut it and put it in place, then marked how long I needed to make the piece next to it, then under it, and so on.. The only thing I pre-cut were the strips. Then after I did one card, I'd take the left-overs from that to start the next one, so each card has different sized pieces. See: 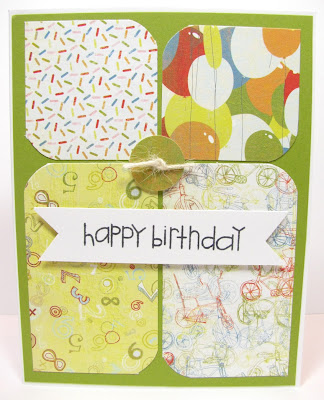 I made two each of the blue, green, and this red background: 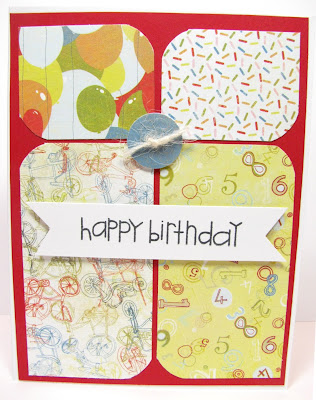 I think my brain was just too tired to do the math, plus this way they are all different.

I even made my own buttons from scraps of paper in the packs. They are much flatter than real buttons, and look just as good.

In other news, Fall is in the air, and it's finally not stoopid hot and humid here. Sunday was gorgeous, and Happy Monday, indeed!

Thanks for stopping by!
Posted by Leslie Hanna at 6:00 AM