Hi there! I just finished a batch of 39 cards for OWH based on a new project by Sandy, our Fearless Leader. Sandy has put together something called the Interactive Card Project, or ICP. It's a series of videos that customizes a challenge based on choices you make. Each choice takes you to the next question until you eventually land on a tutorial for a project based on your choices. It's really pretty cool. You can back up to a previous choice and change your mind, or (if you are like me) I just start over each time.

You should start here for some background. There is a video there that is the guts of the whole operation. The first time you should watch the whole video, but on subsequent trips I click into the video to about 3:45 and jump right into the choices part.

The first time I did this I landed on Get Well, and a message from Sandy that they don't need a lot of these, so this time I made different choices. Heh, I'm trainable. This time I landed on Father's Day, but you know me: I don't like to make holiday-specific cards since I have to pack them away for 11 months every year. Fortunately, OWH works the same way. They like Valentine's Day cards, but "love" cards work all year long. Same with Father's Day -- Happy Father's Day are good, but "Dad" cards are even better.  Don't have to tell me twice.

Moving right along, here is one of my cards, then I'll explain: 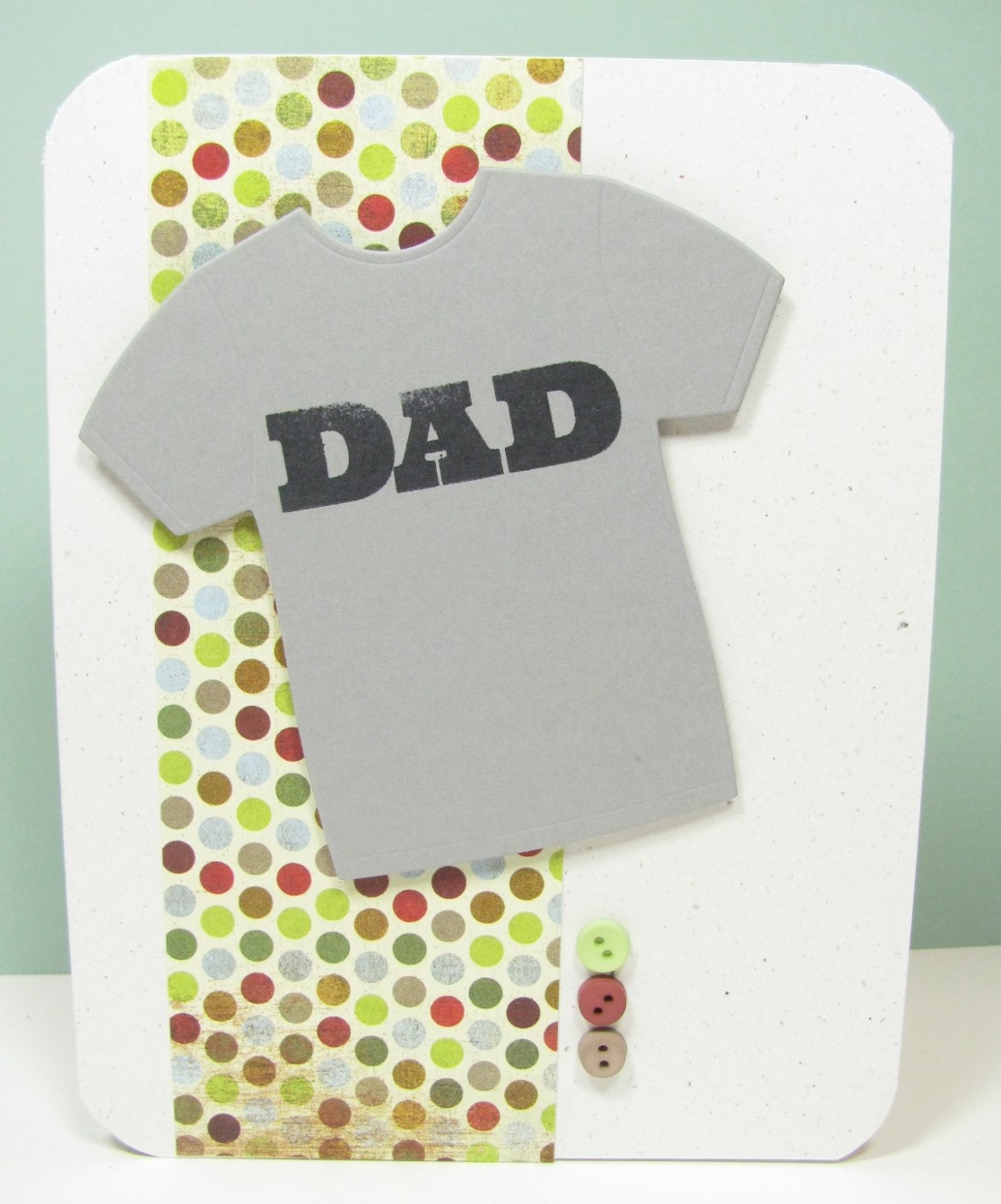 I started with sketch C: 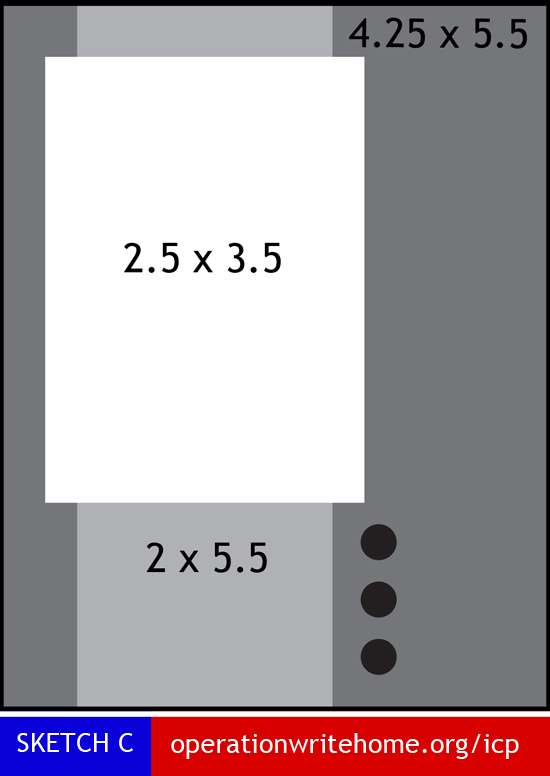 but as you can see I used a T-shirt for the rectangle element, and gave it a little tilt so it fit on the card front. I obviously didn't think this through before attaching all the paper strips to the card bases.

For the pretty paper, I disappeared 13 sheets of 6x6 papers from my Basic Grey Archaic and Oxford pads. I cut each one into 2" strips, so I got 3 pieces from each, giving me a total of 39 strips of paper. This translated into 39 cards. Easy. 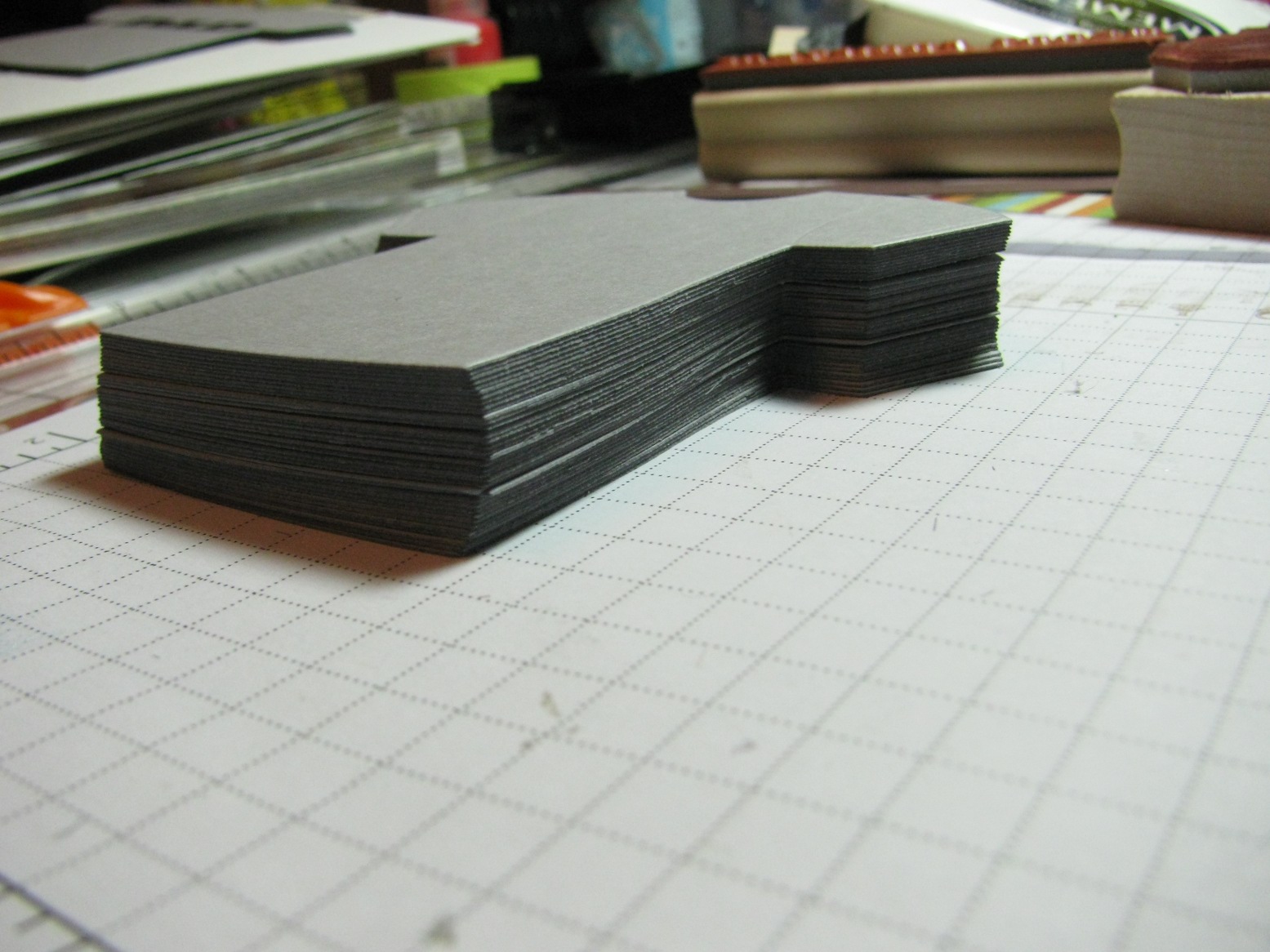 I think a nice heather grey would be an excellent choice here, but I don't have any. Yet. I used the T-shirt die from my MFT Masculine Graphic T Stamps and Die set. The Dad stamp is from the set, too. I stamped it in Ranger Archival Jet Black, and I only schmeared 3 of them, and had to cut 3 more.

All I did was stick a T-shirt over the paper strip with some dimensional adhesive, and I was almost done! But those three dots? Yeah. Having watched Sandy's OWHtv episode last night, I now covet a black pearl pen, but since I was in Use-It-Up mode, I chose to use some buttons from my mini button collection. 39 cards x 3 buttons each = 117 buttons that are GONE GONE GONE.

One other note: Since my pictures all came out like so much crap, I'm only going to show you that one card image instead of boring you with more of the same. You will have to imagine the fabulous patterns of the other papers, and you will also need to imagine you can see the nice embossed lines in the T-shirt die-cut. I hope to use it again some day, and maybe I'll get a decent shot of it then. A girl can dream.

Now back to that ICP thing, because you really should check it out. When I was done with my choices, I saw this:

which tells me the choices I made along the way. I started with Sketch C, then I chose Holiday (option C on that page), then Mother's/Father's Day (option B), etc. So if you want to land exactly where I did, I just need to tell you to make these choices: CCBBA. The ICP even keeps track of that for you! How cool is that?

The tutorial for your card is just past this point.  At the end of the tutorial, you get the back buttons that let you back up and change your answers:

Now think about it ... I made 5 choices to get here. That's a lot of possibilities, which means that Sandy has made a bazillion videos and tutorials for us -- one for each combination of choices. THAT IS A LOT OF WORK and you should totally appreciate it by watching it at least once.

In other news, now that those 39 cards are off of my desk, I plan to break into my just-arrived Derwent Inktense water color pencils and play at some coloring. If it works like I hope it will, I'll be back to taunt you with the pencils. :)