It's Tuesday, and time for another Shopping Our Stash challenge. This week we ask you to go into your collection of Dollar Bin or Bargain Bin finds, or something you scored at the Dollar Store, or just something you got at a ridiculously low price, and use some of it!

Let me preface this whine-fest by saying I am Bargain Bin Impaired, but if YOU can use the treasures you find there, then I bow down to you. I only wish I was more capable, or maybe a better shopper. Sigh.

I used to be guilty of haunting the dollar bins at Mike's until I realized the OMG I CAN USE THAT ON A CARD idea seemed to evaporate as soon as I got home. I have not one but TWO boxes of "bargain" stuff. So I started by pulling out a few things I thought I could use if only to make them go away. Here's the first batch: 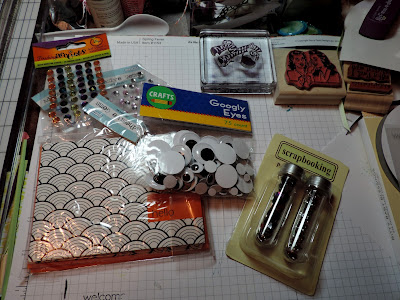 I have some packages of bling, a package of note cards, some googlie eyes, some test tubes of ... something, and some not-put-away-yet stamps (please ignore those).

First I declared the googlie eyes to be a FIND and put them in a real container: 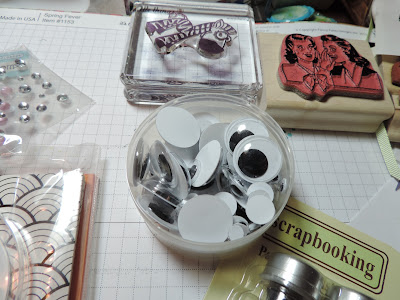 and put them away with my other googlie eyes. Maybe I can find them next time, ya think?

Next I examined the test tube things: 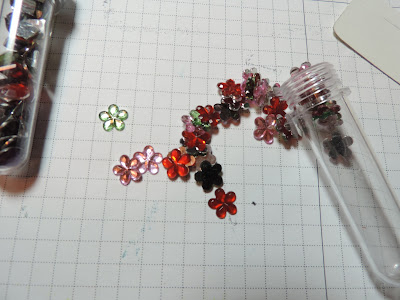 Flowers. Meh. I put them and the packages of bling away.

Now I was down to the note cards. let me just say there's a reason those are a dollar bin item. When I used to buy these things, I would use just the card fronts (they are an odd size anyway) so I hacked off a few of them and tried several things, and failed at all of them. I tried coloring with a Faber-Castell Big Brush marker, but it smeared and I was too impatient to wait for it to dry to see if it might not smear later. Trash. Next I tried to sand off the shiny glossy finish and all I managed to do was sand off the design. Trash. Next I tried coloring with a Copic, and that actually worked, but I hated it. Trash. I was down 3 of the 10, and I was getting stabby, so I went back to see what else I could dig up from the bowels of the dollar find boxes. This: 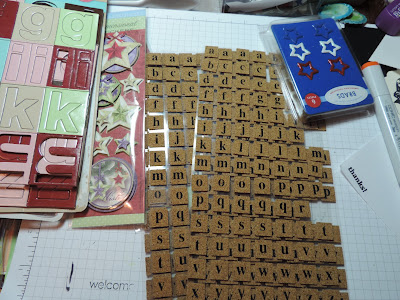 We have chipboard letters, missing all the letters I need for words I thunk up. We have reams of cork letters. And we have a package of glitter star brads. Not much to go on, but I settled on the brads and got to work.

First I discovered the brads have weird legs: 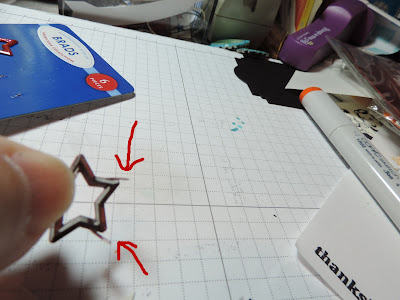 Yeah. Oh, did you notice I put away those stamps? I did. Yes, I was very proud.

So not only were these brads covered with glitter, they had weird legs. My hole punch didn't reach and I had to use a paper piercer to make the holes. In the end, I made this: 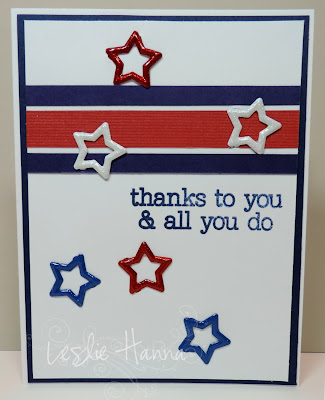 Yeah, none of the blues match, but I think it passes. I did use all six of them here, and now that package is gone. Go, me. All the blue and red card stock you see here was from the 1/4-sheet remnant box, just for the record.

Because of the glitter, I covered the stars with Glossy Accents so I can maybe use this as an Any Hero Card. Those are cards OWH sends to servicemen who don't get a lot of personal mail. It's a nice thing to do, so I try to include a few Any Hero cards in my boxes when I can.

Oh, but my tale is not over yet. No no no, it isn't. You see, along the way I did some other things that made me make even more cards. When I started playing with the star brads, I had an idea to use my MFT star dies and make some "chipboard" stars to mix with the brads: 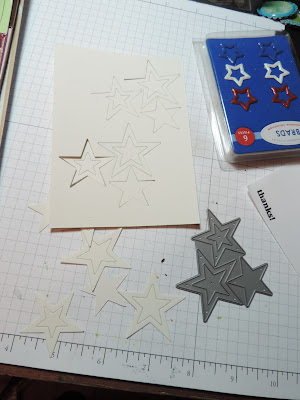 Guess what I cut them from?  The backs of the now-trash card fronts I tried to use! So I actually used another dollar find to make these stars. However, I didn't use them with the brads, so I needed to make more cards. Here's the first one I made: 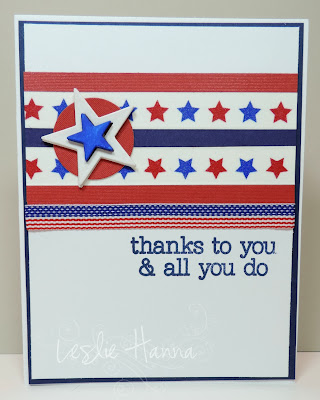 This one also used more paper strips from the same card stock remnants as the first card PLUS some UFOs from my desk. Those strips of star washi tape are left over from ... something. They are stuck to white card stock, so I just pulled them from the UFO box at the top of my grid mat and used them. Win.

I also used a few inches of flag ribbon I got forever ago.

I used two of the stars here. The white of the card stock I cut the stars from was more off-white, so after I stacked the pieces on top of each other, I colored the top one with my Faber-Castell white Big Brush pen. I added a red circle under the white star so it didn't disappear into the background, and I took the small blue star (colored with a Copic) and put it in the center on a dimensional adhesive square. 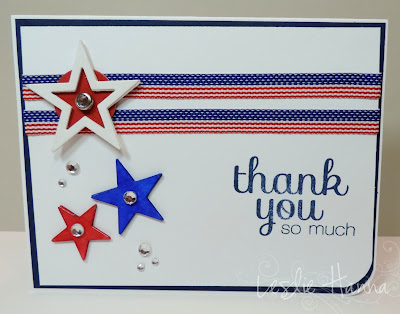 For this one I just used two rows of the flag ribbon and the rest of the die-cut stars. I had to anchor the red circle with a bling brad, so I broke out some of the dollar bling and used it, too. Sweet.

Okay, I'm finally done, and now it's YOUR turn. Go into your Dollar Bin finds and use some of it. Or if you don't have any Dollar Bin finds, use something you got at a ridiculously low price. Then come back to Shopping Our Stash and link us up so we can see what you've made!

Stuff I used that I can identify: