I'm fairly certain my brother doesn't read my blog, which is good because I'm about to post his birthday card. Bro? LOOK AWAY, just LOOK AWAY!

Okay, remember when I said if I make a card for someone I actually know it has to be special? Well darn his luck his older sister makes cards. And darn his luck if this isn't a milestone birthday. Okay, it's not THAT bad, so let's get to it, shall we? First, the card: 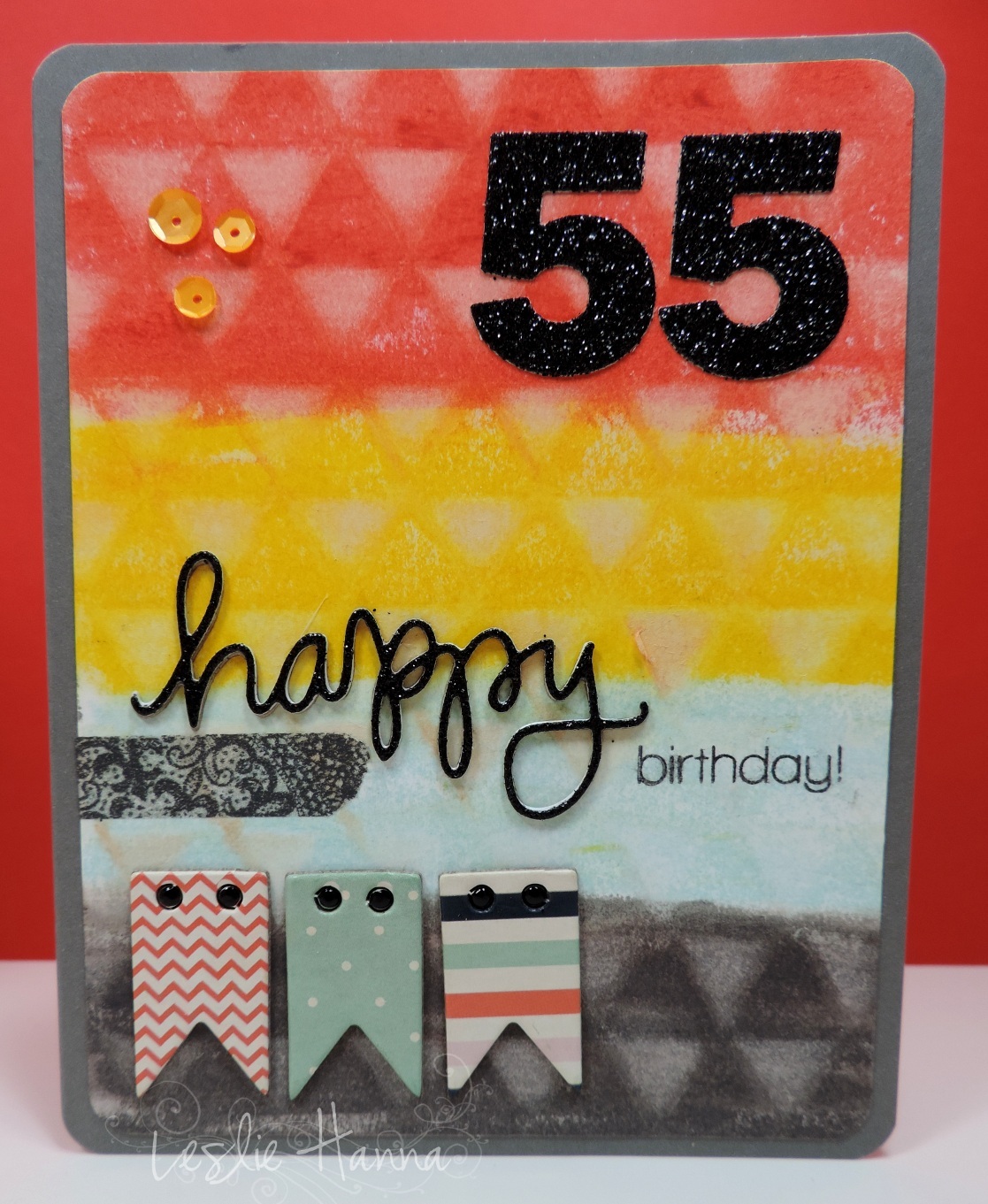 Put your thumb over the 55 before you decide this sux. I liked it better without the numbers, but it NEEDED numbers. NEEDED. Sigh.

This is the first Gelato background I made yesterday, and I wasn't as happy with it as the one I used here, But I also planned to cover up more of it, so it was perfect. Plus, "shabby" goes with "old", right? :D

I have to say I love this hobby. Where else does a mistake turn into an opportunity for embellishment, RIGHT?!?! I die-cut the happy four times out of white and started gluing them together, and made one heck of a mess. Kept one, tossed the rest, and die-cut one out of thin chipboard, then glued the white one to it. Better, but not great. I moved on.

The three banners are from a set of Fancy Pants Trendsetter Buttons I had to have the moment it was orderable. Just now opened them. Yep, true. I declared the colors close enough to work with that background.

I knew I needed bold numbers, so I used my MFT By The Numbers to cut some OMG YES I HAVE BLACK glitter paper. I may or may not have snagged one of each color several years ago, and thankfully one was black.

Washi, it needed washi, but where? Under the happy? Nothing worked. DING DING DING: Cut the happy out of black glitter paper! I did and I liked it. I stamped, then smeared, the birthday next to it. Shhhh, don't tell him. Also, adding the black happy on top of the others made it even more dimensional, and I totally meant to do that.

NOW washi tape would work. I cut a piece of dark grey tape in half and stuck it under just part of the word. Here it is up close and personal so you can see some of the detail: 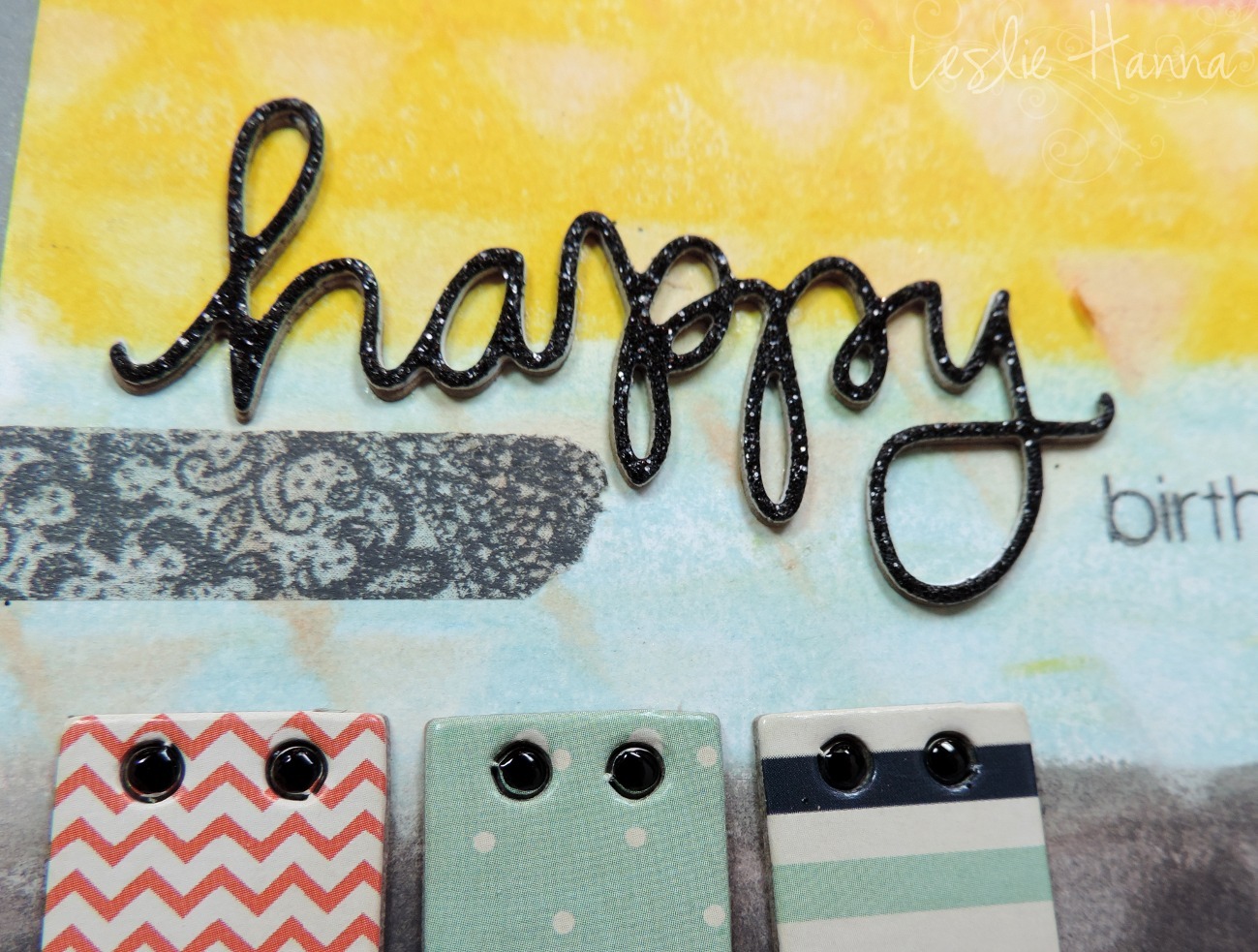 I even used some Enamel Accents on the tags and didn't mess up! You should have heard me talking to myself: don't do it ... leave it alone ... no no no... be strong ... okay, then take a photo of the BEFORE so you have something to blog ... ... then I went for it and it worked. *phew*

And because I can't leave well enough alone, darn my brother's luck, but I have some snark. I was going to stamp this on the inside, but instead I made it into a tag he could wear, though I'm fairly certain he won't, so I'll suggest it can alternately be used as a bookmark. Or trash. Lookie: 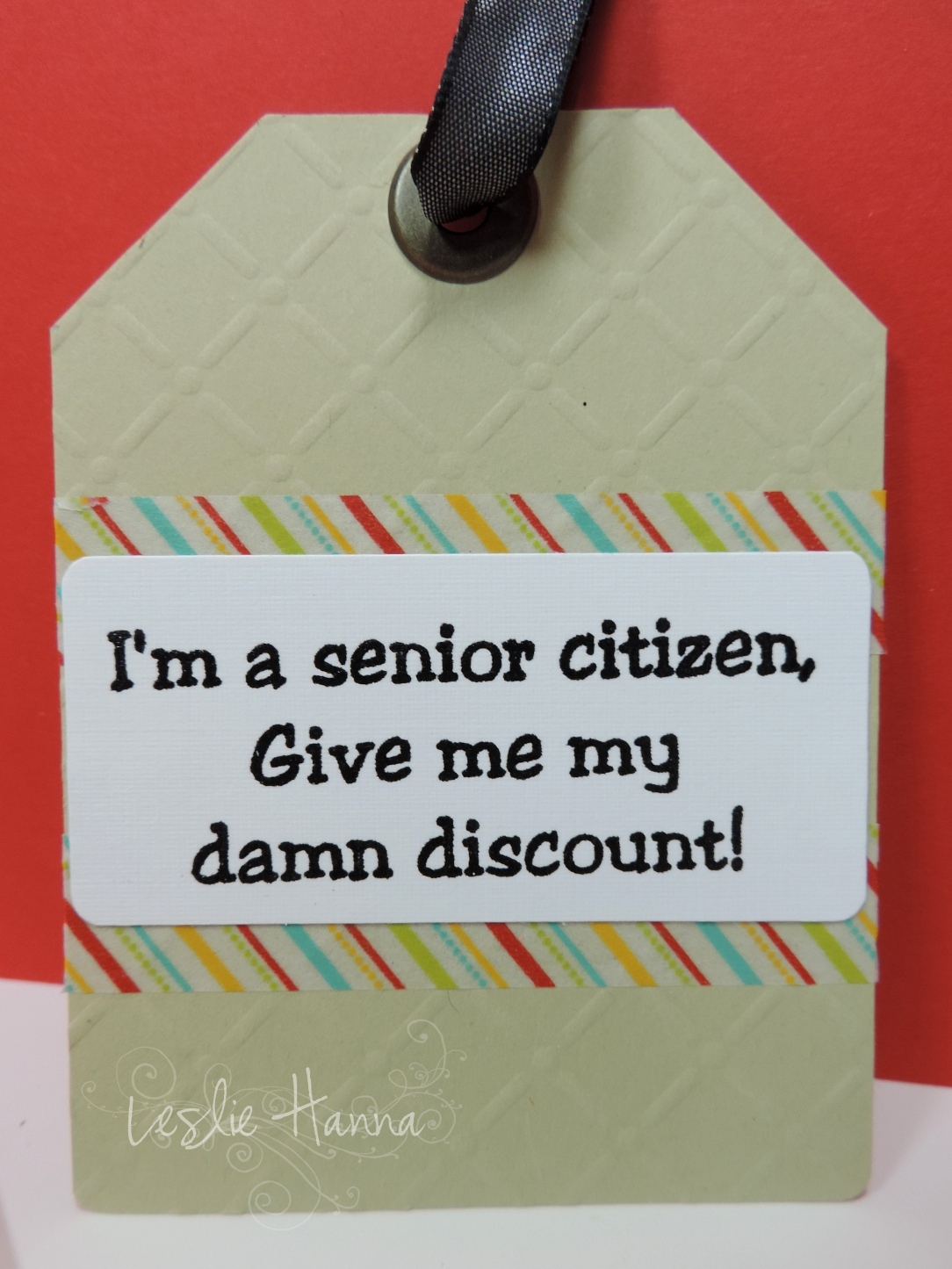 heh I'm also pretty sure 55 doesn't qualify you for much other than AARP, but still, it needed to be done. This tag is made from a UFO (yes, I am very proud) some washi tape (duh) and a sentiment I received from the Stamp Fairy because SOMEONE thought I needed it.

Oh, and I got the idea for the layout from Dixie's card here.

Products used: Um, I'm tired. Let me know if you have any questions and I'll link you up. :)
Posted by Leslie Hanna at 8:49 PM