Happy Tuesday! It's time for another Shopping Our Stash challenge. This week we ask you to use Red, White & Blue (or your country's flag colors) in your creation.

I made two cards for this challenge, and both of them were CASEd or inspired by creations by others. Here's my first card: 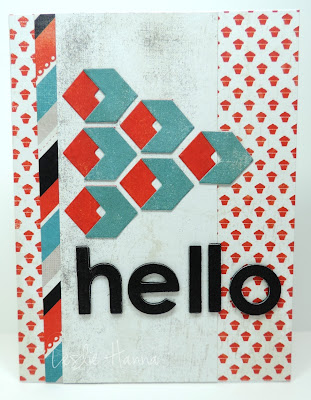 This card uses papers from the Authentique Celebrate paper pack. I love that they are off-shades of our flag's Red, White & Blue. The CASE part of this card was with those layered chevron dies. I got the idea from this card I spied on the CAS(E) This Sketch blog. I love finding different ways to use things!

This next card is a total CASE of this one I found on SCS: 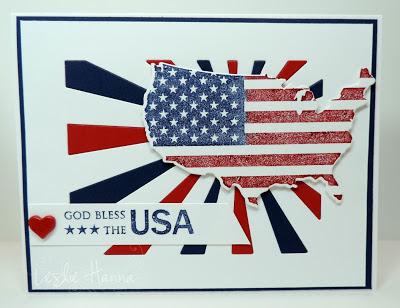 I used a different (and smaller) sunburst die than the original, but I definitely took her idea. I also purchased the USofA stamp & die set from Taylored Expressions after seeing the SCS card. I think it will come in very handy for OWH cards.

To make the background, I die-cut the Sunshine die from Simon Says Stamp from the (mostly) center of a 4x5.25 piece of white card stock. Then I cut it again out of red and navy, and replaced the white cut-out pieces with the red and blue pieces. I was afraid it would be too busy with the USofA die-cut image, but I think it's okay.

Tip: To keep up with all these tiny pieces of paper, I placed strips of washi tape across the back of the white piece, then the red and navy pieces had something to stick to as I put them in. When I was done, I turned it over and added more tape to secure all the pieces.

When I placed the sentiment, I had no recollection of the original card's sentiment, so I guess great minds think alike, huh? I also added that red heart brad, largely because the card needed something to "anchor" the strip with the sentiment. It's an ancient brad, and I had to hack off most of the legs to get it to open. It's so old I think it was sealed shut.

That's it - one patriotic and one not patriotic card for this week's challenge. Now it's YOUR turn. Go rummage in your stash for things the color of your nation's flag, then make something with it and come back to Shopping Our Stash to link us up so we can see what you've made!