Once again, I find myself wondering why I bought something, then forcing myself to use it. In today's episode, I found my MFT Blueprints 20 die set in my "new but not yet used" basket, so I took it out, and the fun began.

I like the quilt-y part of the dies. I think that's what sold it to my brain. I thought I was following a color challenge of red + green + navy, but after I'd die-cut everything, I realized it was dark gray, not navy. Oops. But it's still a classic combination, so I plowed forward.

I cut one each of the red, blue, green and white. Please notice there are three parts to the quilt: the frame, the squares, and the shapes that fit into the squares. This forced my brain to spin a bit.

I started with the blue frame and put in all white squares. Here's that card so you know of which I speak:


This was easy. All I needed to do was make sure I didn't put two of the inner shapes of the same color next to each other.

I had more frames, and more parts-is-parts, and actually considered making a few more, but what was left of my brain did some quick math, and I realized it was like the never-ending song: more frames = the need to cut more innards, yielding ... more frames. I tossed the remaining parts.

Here are the four finished cards so you can see what I've been rambling on about: 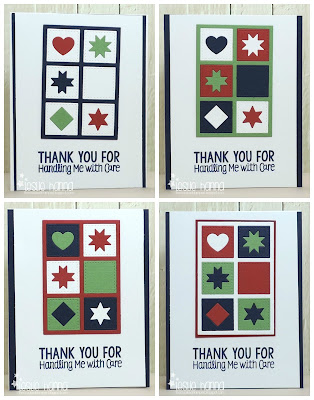 I'm not sure which one I like more than any of the others. Each has its strong points. At first I thought I liked the navy frame with the white squares the best, but now I dunno. Maybe I like the green frame better.

Oh, the sentiment is from the MFT You've Got Mail stamp set. I thought it would be a fun sentiment for a thank you card from someone who has been pampered by her friends. Or maybe to give to your doctor during this month of thankfulness.

Considering how much sweat I put into these cards, the list of products is quite short. Stuff I used: remnants of SU navy, red, and green card stock, and the following: