Kitty and I enjoyed a totally lazy Sunday. Here she is in her OMG LIFE IS ROUGH I NEED TO NAP pose in her sunbeam. The door was open to let in some of the amazing fresh air, and she was zonked. 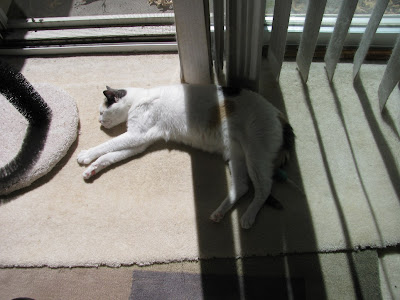 Last time she did this total zonk thing was after a day of classes, and she was so stressed from being social, she passed out and I thought she was dead. I had a little Kitty CSI fun then, so I thought I'd do it again: 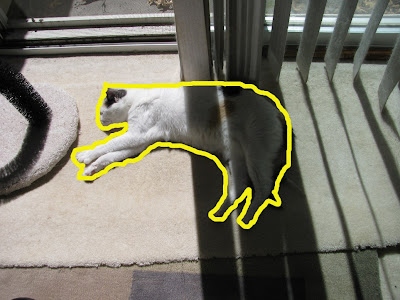 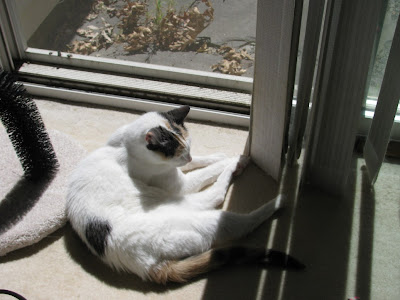 Gosh, but her life is tough.

I accomplished two things today. Okay, five things, but I'm only going to mention two of them here. First, one of my Tweeps and Bloggie pals, Stampin' Libby, is even MORE famous now than she was already! Why? WHY?! Because she entered AND WON the Whole Foods Food Fight at the Mother Ship of Whole Foods in Austin, TX. Her recipe sounded so yummy, I tried it. This is what mine looked like right out of the oven: 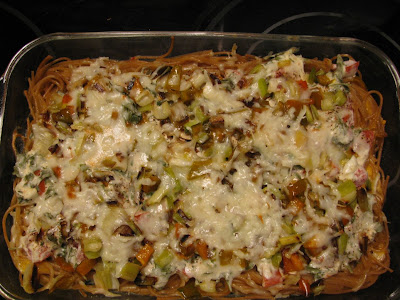 ... and here's a peek at the inside yumminess: 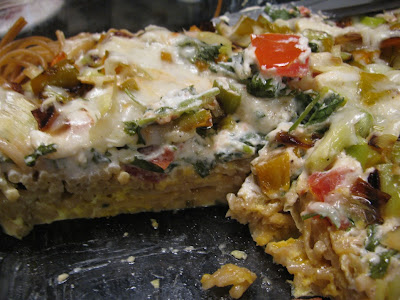 M-m-m-m-m. I made a few modifications and substitutions, as follows:
1. Spelt spaghetti instead of corn spaghetti. Spelt is brown, in case you didn't know that.
2. Poblano peppers instead of Hatch chilis. I am a wimp, plus I'm not going to New Mexico to get a Hatch chili (chile?).
3. I tried to roast the pepper on my ceramic-top stove. Not happening, so it wasn't roasted.
4. Leeks instead of onion because I had leeks from the farmers market and I didn't feel like putting them away, so I used them instead.
5. I used most of a bunch of cilantro, because I love it so, plus I didn't want it left over. I could call this a cilantro pie. Yes, a lot of cilantro.
6. I used a different smokey cheese because my Whole Foods didn't have the one she used. Mine was a hard-ish cheese, where something like a smoked cheddar would have been a lot softer. I liked the contrast, though.

See? You can totally make this recipe your own, and it is STILL yummy! Next time, and yes, there will be a next time, I'm thinking about adding grilled chicken to the mix. Mmmmm.

The other big thing I did today was watch a video about how to make tassels. You see, I have about forty bazillion skeins of DMC floss, and they need to get gone. Plus, I had an idea for making book marks to give away with my holiday craft show sales, so I could put the tassels on the bookmarks.

This is the first pass at the bookmark + tassel: 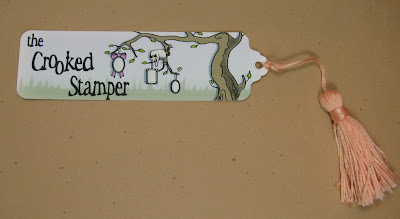 That tassel weighs about 5 pounds, and is probably a bit too hefty for the paper bookmark. I think the next batch of tassels I make will be smaller. Batch? She said batch? I told you I was busy. Look: 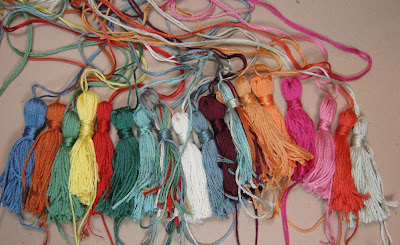 These are rough and unfinished, but you get the idea. I have a LOT of DMC floss.

Here's a few up close and personal: 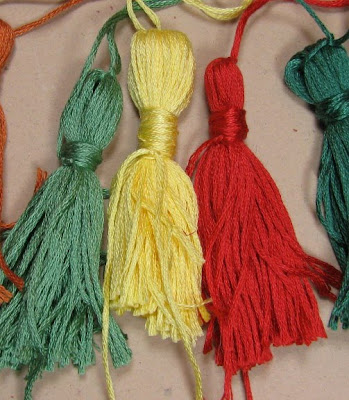 They are really easy to make. Once they're trimmed up, they'll be fine.

Did you notice I posted NO CARDS? That's right. Not one piece of card stock gave its life for a card today. Not in my craft room, anyway. But I did empty the dishwasher and fill it up again, and cook, and make more mess, and cleaned some more. Tomorrow. I promise. Tomorrow I shall make some cards. Because if I don't, it's going to be a very, very long week.

Thanks for stopping by!
Posted by Leslie Hanna at 9:54 PM