I've been a busy bee the past week, but I've not made anything new. Okay, technically these are new cards, but they are just multiples of cards you've seen before. Semantics. Sigh.

I thought I'd take a break from my mass-production to show you a few differences in what I've made. For example, the different ribbons on these cards:

My serving suggestion for The Ladies used the green ribbon, but I had the purple one out to give them options, and I think almost all of them went with purple. When I made the extras, I did half and half. I am soooo indecisive.

These next two cards differ only in the added leaves at the bottom of the one on the right:

Of the 6 cards I made, two of them got these leaves: 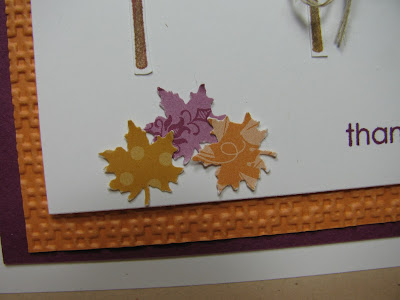 Why? Because I stamped the sentiment first (in case I got it crooked) and I got it crooked on two of them. As every stamper knows, each piece of card stock has two sides, so I flipped it over and tried again. Unfortunately, the dark ink of the "bad" sentiment showed through the white and needed to be covered up somehow. Thus, the leaves. I punched them with a leaf punch I've had since before I'd ever heard of SU, and the DSP paper I used for them is from my "hahahaha I now own every color of SU DSP" paper collection.

Next up are two versions of this card: 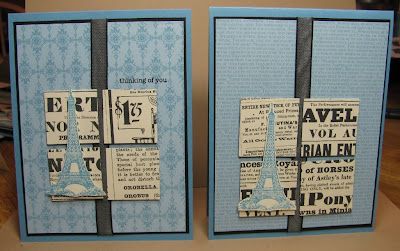 When I was cutting supplies for the kits, I knew I didn't have enough of that pattern on the left to go around, so I chose another design with a horizontal pattern. Here's a pic of the two papers: 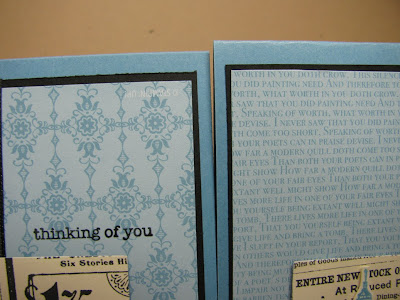 Also, the one on the right doesn't have a sentiment yet. Several of The Ladies opted for no sentiment, and I kindof like that.

The fourth card we made was the bat card from instructions I bought, and I didn't feel right making the cards to sell, so I didn't. I still may use the kit parts to make something else, though.

Then last night, I stamped 20 cod images and cut them out. Then I declared HAND CRAMP and called it a night. TONIGHT I cut and stamped the rest of the parts-is-parts to make a bunch of these: 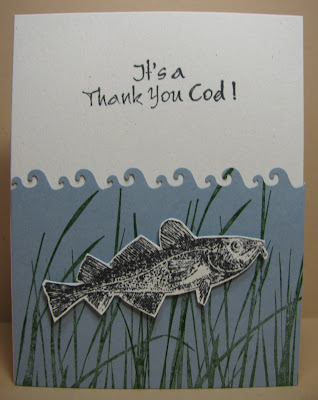 I made all the versions: Anniversary, Thank You, Thinking of you, Birthday, Get Well, and this one (which had not ever seen ink): 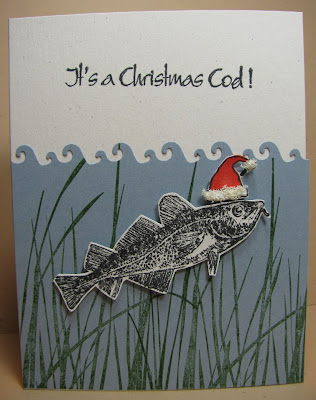 I was very proud of myself for thinking to stamp the little A Muse Santa hat. I even put Flower Soft on the white parts! But when I went to put it on the fish, I saw the top of the hat goes in the wrong direction! (By the way, this is a perfect example of where a digital image would save you. Just reverse the image and it would work.)

So I made that one above, then I did this with the other one: 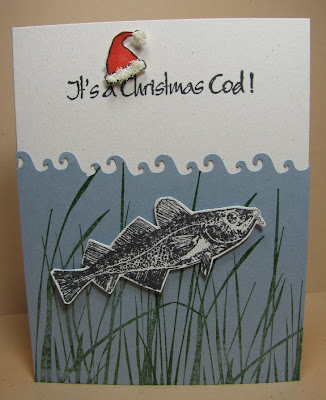 I actually really like the spot of color the hat brings to the card, don't you? Do you have a preference? (On the fish versus on the sentiment.) Inquiring minds want to know, especially mine!

So you see, I have not made anything new, just more of the same. I have an idea for a card to make tomorrow night. Let's hope it actually happens.