This week's challenge at Hambo Hoedown is to us their image to make a card for :

They gave us this pig-in-a-sub-image to use (free if you played last week and remembered to email them your card): 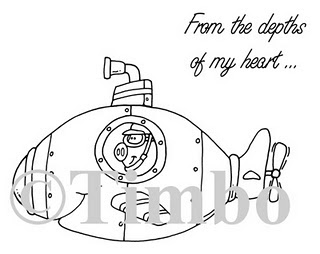 Since I am in the midst of a major shake-up in The Captain's Quarters (i.e.: I cleaned and organized and put some stuff away), I found some blue papers that were perfect to use for the water for my cards. Yes, I made two. Here's my first one: 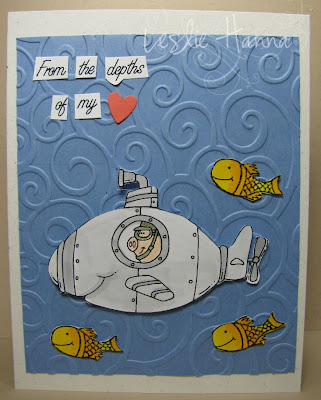 I was boring and colored the sub grey. To make up for it, I added some brightly colored fish (A Muse image). The swirls are from an embossing folder. I printed the sentiment and after die-cutting it with an oval, I decided it was too white, so I cut it up. I had planned to use the heart on the die-cut oval, so I just used it instead of the "heart" word.

My second card is the same as the first one except for the blue paper: 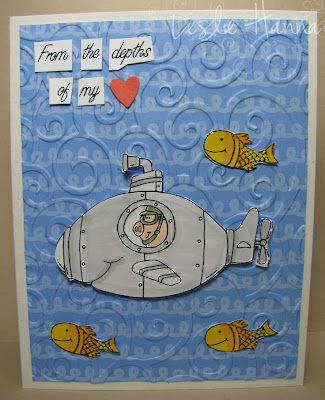 This is a piece of card stock from one of the first SU Scrappin' kits I ever bought. Found it at the bottom of the Heaplet and decided I was too tired to put it away anywhere. I really like how it embossed, and since it's white core, this would sand up so nicely. Hmmm, after all these years, I may actually use the rest of it! We'll see.

If you want to play this week, make sure to read the Operation Write Home Card Guidelines. You can find all the details for the cards and this week's challenge over at the Hambo Hoedown.

Thanks for stopping by!
Posted by Leslie Hanna at 12:30 PM