My eldest has a birthday today (*waves* - pffth, like he reads this blog), and I'm telling you: cards for men are one of the most challenging things in my world. Well, next to domesticity, that is, but this is a crafting blog, so it's way up there.

I took the June SFYTT: 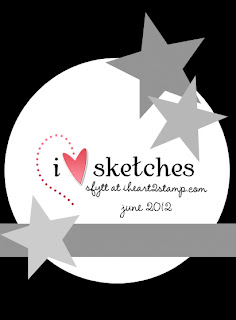 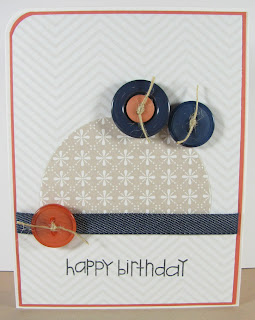 I'm quite proud of the stash content on this card. :) Both the chevron and the ... other patterned paper are from The Heaplet, and I declared them "coordinating", or at least both in the "kinda tan" family. Color, it needed color. I went with blue, and added a piece of almost-never-used SU denim ribbon. After I scrapped (HA! No pun intended) the idea of stars and instead hollered "BUTTONS", I grabbed two dark blue, then opted for orange for some pop. Yes, that's a small orange button nested inside the large blue one. I added the orange layer, rounded the top left corners, and a card was born.

I think it's different, not boring, and shouldn't embarrass him if anyone else sees it. I'd call that a success. :)

In other news, I'm coming down off a 4-evening book club marathon with The Bloggess, and I'm seriously behind with my crafting. I played a bit today and made a ton of pretty trash. I hope to gain some ground on Sunday and do a few challenges, so hopefully I'll have something more to share.

Thanks for stopping by!
Posted by Leslie Hanna at 9:50 PM