This weekend has been a bust in the craft room. I've printed out sketches and color challenges and all sorts of things to occupy my time, and everything I've touched has become more pretty trash. The last straw was this card by Jennifer McGuire, and the accompanying video in which she shows us how she pulled off her trick with the die-cut flower, and it's not smoke & mirrors, people. I totally intended to CASE the idea. I failed. But I was so frustrated by my failures this weekend that I forced myself to finish just one card. JUST ONE! Here it is, then I'll explain: 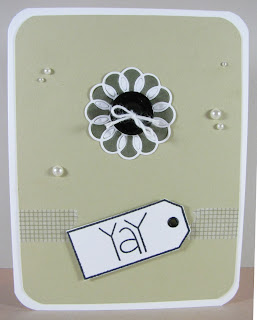 Here's how it's supposed to work: Jennifer die-cut the shape, flipped it over, applied a dot of glue to the back of each of the inside parts-is-parts, flipped it back over, pressed it to the card front, waited for it to dry, then removed the outer part of the die-cut shape. This left all the innard pieces that she then went back to color.

This is all to keep you from having to color all the separate tiny pieces, then place them back into the die-cut. In theory.

My turn. I die-cut the shape, but there seems to be a delicate balance between making a clean cut and getting the inside bits to stay put. They were popping out as I took the thing out of the die (which is what you would normally want), so by the time I got it to my desk, it was all apart. And I tried several times. Oh, I tried. I finally decided it would be WAY easier in my world to just do the fussy gluing, and that's what you see here. It still wasn't easy, as you can tell by the pokey-marks from my paper piercer I used to poke out the shapes: 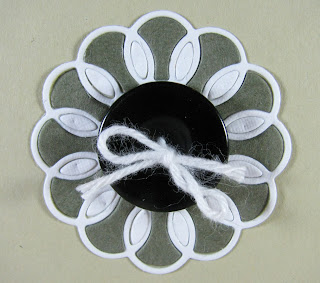 My method: First, I die-cut the shape (Memory Box) in both white and artichoke. Truth be told, I cut many, many white ones. Two survived. Most of the bigger pieces around the outer edge, and the smaller pieces from between them, fell out on their own, so I stopped fighting it. I stuck the skeletal white die-cut to the River Rock piece, just gluing the center and the few white pieces that stayed in place; the outer edges are not glued.

I then punched out all the artichoke bits from the outer edge of their die-cut and glued them into the white die-cut shape. I applied a dot of glue in each missing white section, then I took the other white die-cut and placed it over this one, and used my paper piercer to poke them out of the top die-cut and into the bottom one. Thus, the pokey spots on most of them.

In case you wondered why these colors, I was trying to follow the current Dynamic Duos challenge: 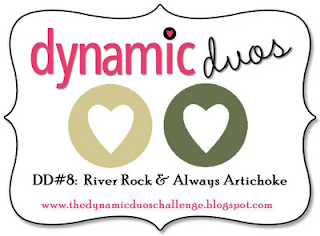 Fortunately, they also allow neutrals, so I used black in addition to the white. I needed contrast, and the die-cut is really a ribbon slide, so I needed to cover the center, and a black button was it.

The ONE THING on this card that I actually like is this washi tape: 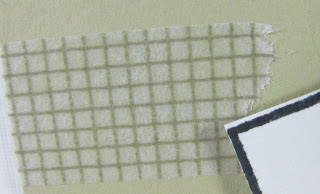 It's Khaki or Olive or something, and I loved the pattern, so I got it in several colors. I am weak. I think it goes really well here, and it breaks up the bottom part of the card.

The tag was an afterthought. I was going to stamp the sentiment in black between the pieces of washi tape ... booooring ... so I went with the tag.

Yes, I have had a baaaad weekend in the craft room. Except for my SOS card that you won't see until Tuesday, I have finished NOTHING ELSE. Well, I made a to-die-for enchilada casserole, but I'll talk about that next time.