When I first saw this Happy Birthday circle die from Simon Says Stamp, I had a few ideas for using it. I like it when I have the ideas before I buy it, and I'm not all caught up in the release frenzy.

May I just say that I may never make this card again. What a comedy of errors. I will call it a learning process, and just move on.

Here's the card, then I'll explain: 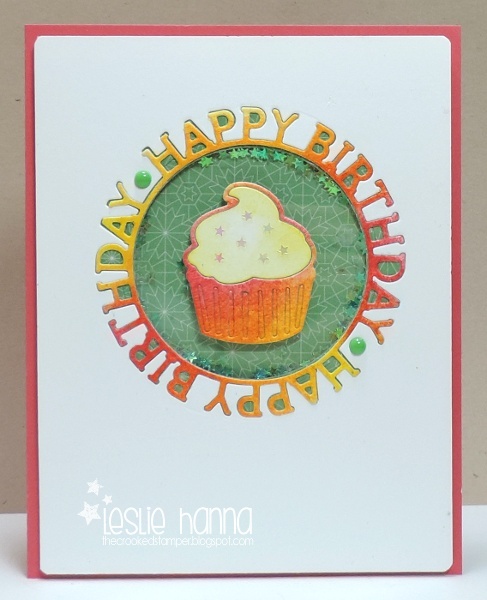 Everything I did created an opportunity for fixing it before I could take the next step. I had to get very creative.

But nooooo, let's make it difficult! I ended up cutting a circle from a piece of green paper and placing it over/behind the acetate. (Top white panel, acetate, green paper with the circle cut out.) This is what makes the spaces in the letters green, to match the paper I put behind the shaker. If I hadn't done that, then the white fun foam would have shown through the spaces in the letters. Trust me, that wasn't pretty.

Then I cut some fun foam and added that layer, filled it with some Martha Stewart confetti stars, and finally added another piece of green paper for the backing.

It looked unfinished, so I added the cupcake that was die-cut at the same time as the words, and added a white top to it as icing. I glued a few stars on it as sprinkles.

If I ever make this card again, I'll just stick the die-cut Circle Happy Birthday to the white card base.

All in all, this turned out okay. I'm sure it can be done easier than I did it! But time spent in the craft room is never wasted. You always learn something, even if it's what not to do.