It's Tuesday, and time for a new challenge at Shopping Our Stash. This week's theme is Put A Bird On It, and we'd like to see a bird on your project.

I will admit the phrase "put a bird on it" came to me via somewhere on the interwebz. You see, it turns out it's from something called Portlandia, which is/was a tv show, probably during the 8 years I didn't own or watch tv. Just consider me out of touch with anything older than 1979, and you'll get the picture.

So somewhere along the line I saw this video:


and it stuck in my brain. It's silly, but you know what? Sometimes putting a bird on a project actually does work, so here we are. :)

Here's my card for this week's challenge: 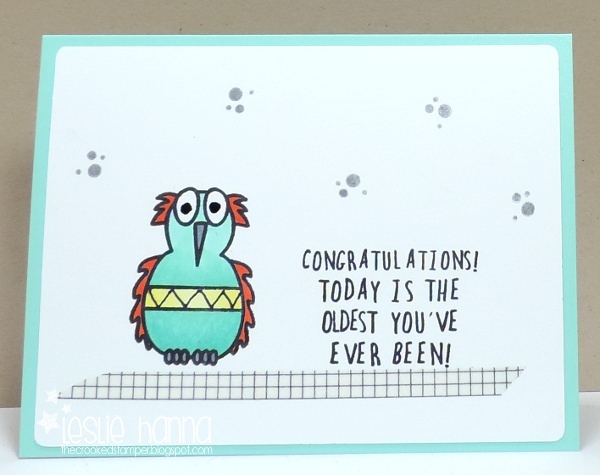 I used my neglected Alley Way Birds of a Feather stamp set for da bird. I actually had three or four false starts with my Tim Holtz Bird Crazy birds, but one at a time they hit the trash, so I went digging in my Birds section for something, and rediscovered this set. I like that three or four of the birds in this set look dumbfounded enough to use with snarky sentiments. :)

I had this dream of blending the bird from green to blue, but that didn't happen. I think my colors were too close together. I used the fabulous Hex Color chart designed by Sandy Allnok. It's a Copic color chart in order by color, not by number, so you can get a really good idea of which markers go together (even from different color groups). If you aren't familiar with this chart, please do go watch the video later.

So anyway, I was going for green-to-blue but ended up with a nice blend of blue-green. I'm not unhappy with it. I added some silver embossed dots to the background (it was so white), and added some black glaze pen to his eyes. And of course a piece of washi tape to anchor the little fellow.

The sentiment was in a box of unlabeled foam-backed stamps, so I have no idea who made it, sorry! I've had it a really long time.

So, got some bird stamps that haven't seen the light of day for a while? Why not dig some out, use them, then link up over at Shopping Our Stash!

Stuff I used: sentiment from unknown source, washi tape from Teresa Collins Far & Away collection, vat of clear embossing powder, and the following: